In wake of France tragedy, Bastille Day will go on Saturday in Fairmount neighborhood

The masses will still be encouraged to eat cake – well, Tastycakes – at Eastern State Penitentiary’s celebration of Bastille Day on Saturday, despite the terror attack in France.

Nicole Fox, marketing manager for the historic prison turned tourist attraction, said there are no plans to cancel the 22nd annual block party, which can draw thousands.

A man drove a truck into a holiday crowd in the resort city of Nice on Thursday night, killing 84 and injuring hundreds.

“Our thoughts are with the victims of the attack in Nice,” he said Friday. “Traditional Bastille Day is a celebration of freedom and unity. Our version adds a loving parody of French culture. These are two good reasons to keep our plans to celebrate on Saturday.”

“We're a safety conscious organization, and continue to coordinate with the Philadelphia Police Department and city officials to create the safest event possible,” Kelley added. 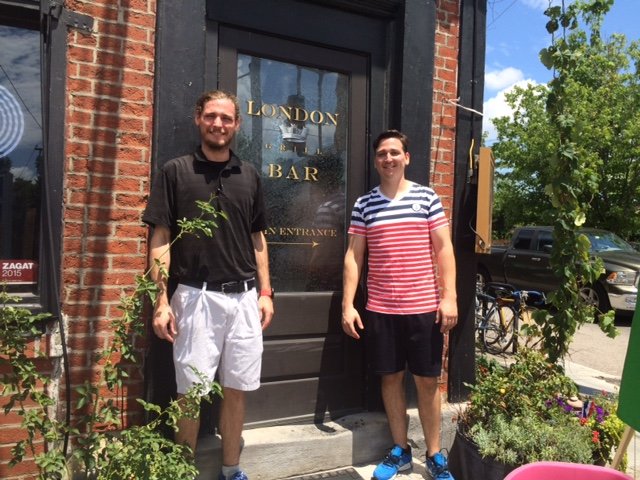 Brothers Pete and John Bradley, barmen at London Grill on Fairmount Avenue, expect thousands to throng the closed highway for blocks on either side of Eastern State Penitentiary's annual Bastille Day celebration Saturday, despite the terror attack in Nice, France. Organizers say they are working with police to ensure public safety.

Fairmount Avenue will be closed all day until midnight Sunday. There are events, including a festival beginning at 2 p.m. and a mock storming of the "Bastille" at 5:30 p.m., with the prison subbing for Parisian fortress.

As part of the comic re-enactment, Terry McNally, a co-owner of London Grill and Paris Wine Bar, will once again dress as Queen Marie Antoinette, scattering Tastycakes to the masses.

John Bradley, a barman at the London Grill, said he hopes organizers “take a moment” to acknowledge the terror event in France. But then he’d like to see the celebration go ahead, “because I don’t want to see that guy – the truck driver – in the spotlight.”

“It’ll be a great day,” said Bradley, who has already bought his red, white and blue shirt for working the bar on Saturday.