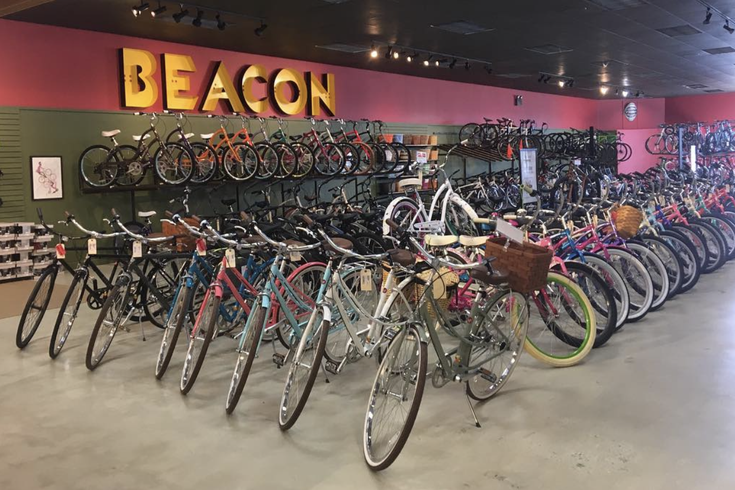 Beacon Cycling in Northfield, New Jersey is closing at the end of February and is selling off all remaining inventory as part of a retirement discount. The store is located at 231 Tilton Road and all sale items must be purchased in-store.

Beacon Cycling, a beloved South Jersey bike shop that has been a hub for cycling enthusiasts at the shore in Atlantic County, will close at the end of February after decades in business.

Customers looking for discounts on bikes and equipment can head to the Northfield shop for the rest of the month to take advantage of the company's retirement sale, which began in January after owners Mitchell and Susanna Rovins decided to say goodbye to the family business.

"We're selling everything down to the bolts," Susanna said.

Sale prices at the shop are valid in-store only and cover a wide range of products including bikes, parts, helmets, apparel and other items. Bikes for both kids and adults are still available at the store, with more than two dozen remaining as of Feb. 10. The store's inventory can be viewed at the Beacon Cycling website.

The roots of the business date back to 1930, when Rovins' grandfather started Beacon Auto, which had additional locations in Cumberland and Salem counties. When Rovins' father took over the shop, Beacon also began selling bikes and bike products, according to the Press of Atlantic City.

Rovins and his three brothers ran the shop together from 1982 to the early 2000s, when Rovins consolidated the business to the Northside location and pivoted fully to cycling products. He met Susanna when she stopped into Beacon Cycling as a customer. The couple have been married for 30 years and have raised three children.

Bikes have been in high demand throughout the coronavirus pandemic, as people have sought recreational outlets and physical activity in the outdoors.

The initial consumer push was a boon for shops, but soon became a challenge as supply chain issues resulted in long shipment delays for new bikes and customers turned to large online retailers. This was among the reasons that Annarelli's Bike Shop in Ocean City closed in the summer of 2020 after 83 years in business.

The Rovins reportedly have sold their Northside storefront to Moppert Brothers Auto Collision Specialists and plan to close down at the end of the month.