It will be sold at more than 20 locations in the state starting Friday, June 24 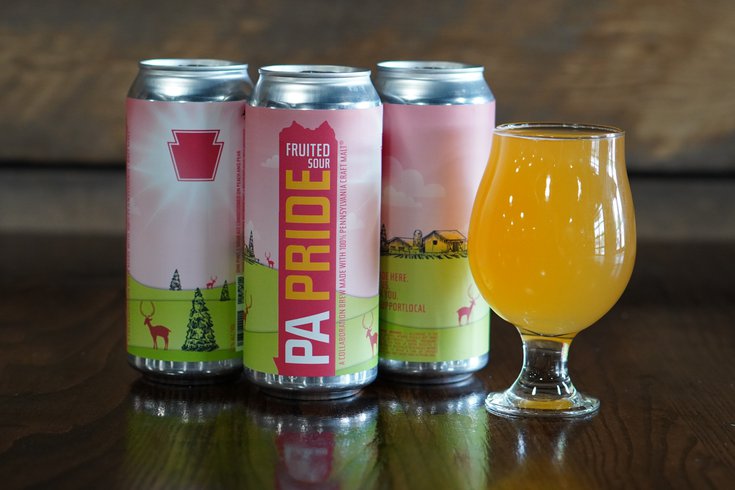 A fruited sour is the new beer created for PA Pride series, and it goes on sale in cans and on tap at select locations on Friday, June 24. The beer is brewed with the Philly Sour Yeast, which was discovered on a tree in Woodland Cemetery as part of a brewery sciences class at the University of the Sciences about six years ago.

Breweries across Pennsylvania collaborated once again to release the sixth beer in the PA Pride series, a fruited sour beer that goes on sale throughout the state starting Friday, June 24.

The PA Pride series, which sets out to honor Pennsylvania’s agricultural industry, was born when Chester County-based Deer Creek Malthouse approached digital promotion company Breweries in Pennsylvania in hopes of creating an all-PA beer collab. From there, the first PA Pride beer, a pale ale, was released in November 2020, followed by a pilsner, a Kölsch, an IPA, and a double IPA.

Peach and pear puree add fruity flavors to the brew, while locally source ingredients, like grain and malt from Deer Creek Malthouse and hops from King of Prussia-based Zuckerman Honickman, add body and subtle floral earthiness.

Another important ingredient – Philly Sour Yeast – adds the tartness, along with further local flair to the beer.

Philly Sour Yeast, known for its sour flavor and time-saving brewing qualities, was discovered by a team of University of the Sciences (now St. Joseph's University) researchers about six years ago. As part of a brewing science program, a student found the yeast by scraping the bark of a dogwood tree in West Philadelphia’s Woodland Cemetery and then University of the Sciences professor Matt Farber isolated it in a university lab.

"The flavors of PA Pride Fruited Sour hearken to classics of summer like sour-sweet peach ring gummies and the elegant sparkling Bellini and will deliver maximum summer refreshment in a can," Breweries in Pennsylvania said in press release.

Starting Friday, the beer will be packaged in 16-ounce cans and sold at more than 20 breweries throughout Pennsylvania. It will also be available on draft at some of these locations.

The Fruited Sour is the second PA Pride release of the year. A multi-grain saison and amber lager PA Pride beers are also expected to be released before 2022 is over.