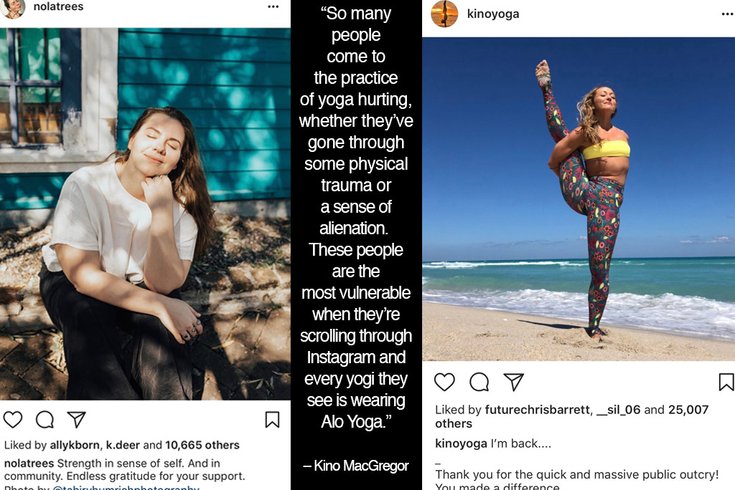 Yogi Dana Falsetti, left, has gained a large following on Instagram, drawing fans with her personal vulnerability and struggles with body image. Yogi Kino MacGregor, right, has come to the defense of Falsetti, who has been sued by yoga clothing maker Alo Yoga.

The 24-year-old Bucks County native stumbled on internet acclaim in 2016, when her advanced yoga practice attracted Instagram followers in droves. It wasn’t just Falsetti’s headstands or backbends that people liked; fans were drawn to her personal vulnerability, her struggles with body image, eating disorders and overall self-loathing, which she was eager to share with others enduring similar pressures on the image-driven social media app.

Through her partnership with a digital yoga company called Cody, Falsetti produced a series of easily accessible online yoga classes and body-positive videos including one entitled “I Am Worthy.”

When it came to sponsorship opportunities with yoga clothing companies, however, Falsetti was even more discerning. She was fearful of being tokenized as a plus-size woman and vigilant of “dancing the fine line of necessary representation and being used as a circus highlight.”

Falsetti received waves of support from her fans, both veteran and future yogis from all walks of life. But last December Alo Yoga acquired Cody and the rights to all its content, including Falsetti’s videos. Falsetti resisted, via her Instagram stories, as she always had. Alo Yoga sued her for violating her contract after she disclosed non-public information on Instagram about the company’s acquisition before the deal was closed.

As Falsetti’s legal troubles mounted and her lawyers insisted she remain mum on the pending case, another world-renowned yoga teacher, Kino MacGregor, wrote an essay defending Falsetti on "Elephant Journal," a yoga web site, and started a GoFundMe campaign to pay her legal fees. The campaign raised more than $50,000 in just a few weeks, but MacGregor told PhillyVoice that, even with the donations, Falsetti is barely breaking even and fears the worst is yet to come. 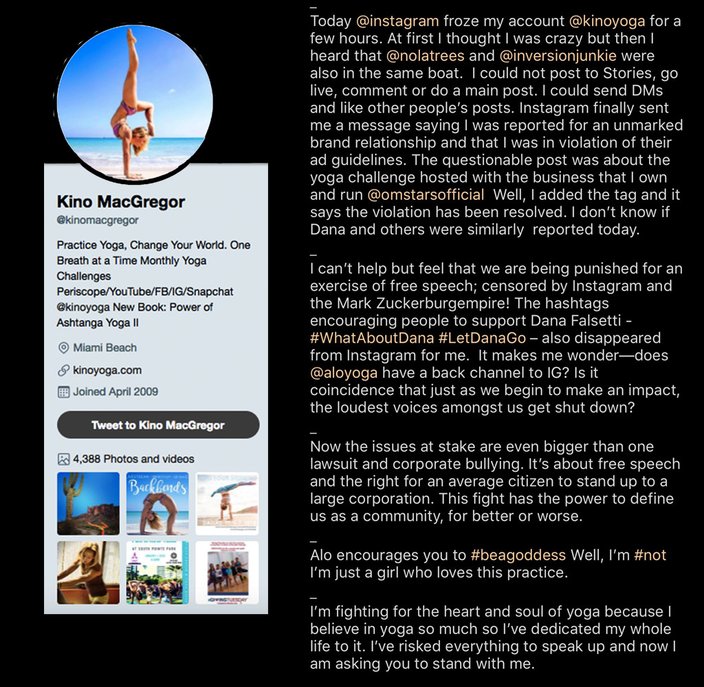 Kino MacGregor discusses on Twitter her own and fellow yogi Dana Falsetti's battles with the Alo Yoga clothing company.

'THESE PEOPLE ARE THE MOST VULNERABLE'

Kino MacGregor is not your typical Instagram yogi, either. Most of her contemporaries model a pretty rendition of a sacred exercise that’s become synonymous with skinny, beachy, blonde LA. But MacGregor journeyed to Mysore, India, 20 years ago to learn from the source. Amid today’s deluge of corporate yoga campaigns, which intentionally conflate materialism with spirituality, MacGregor teaches yoga fundamentals in an abundance of online tutorials and has more than a million followers on Instagram.

MacGregor is a powerful female force in an industry that’s been controlled by mostly western white men, purveyors of “essential” yoga fashion but also self-appointed demagogues on women’s bodies. Lululemon Founder Chip Wilson made headlines in 2013 for saying that “some women’s bodies just actually don’t work” for the company’s yoga pants, because of “rubbing through the thighs.”

“People are paid vast amounts of money to portray that they’re just loving this brand. And I can tell you from my experience of this brand that [Alo] just wants you to fall in line.” – Yogi Kino MacGregor

Chip Wilson has long since stepped down from the corporate yoga scene, but Lululemon’s more recent competitors are even more pervasive with the rise of social media. Inside Instagram’s warped world, an ever-expanding pool of yoga brand ambassadors, models and certified yoga teachers muddies the waters between organic yoga inspiration and the marketing of clothing companies.

“So many people come to the practice of yoga hurting, whether they’ve gone through some physical trauma or a sense of alienation. These people are the most vulnerable when they’re scrolling through Instagram and every yogi they see is wearing Alo Yoga,” MacGregor said.

It’s not clear how much Alo ambassadors are paid to endorse the company’s clothing on Instagram. MacGregor believes that, for top-tier ambassadors with millions of followers, it’s enough money to replace a very lucrative full-time job. An Alo Yoga spokesperson declined to comment on ambassadors’ earnings to PhillyVoice.

It often isn’t obvious to Instagram users when a popular yogi is being paid to model Alo. Sponsored posts are frequently denoted with the easily overlooked #ad, even though the FTC requires that material connections between advertisers and endorsers “should be clearly and conspicuously disclosed.”

In March 2017, The Sydney Morning Herald interviewed several Instagram influencers who report making “anywhere from $200 to $15,000” per sponsored post. Alo ambassador Sjana Earp, who has 1.4 million Instagram followers, explained, “As your following grows, opportunities grow and so does the price tag associated with posts.”

Later that month, Danny Harris, co-founder of Alo and CEO of its billion-dollar parent company, Bella Canvas, told Fashionista, "We have a Gigi Hadid or Kendall Jenner or these other people wearing the Alo brand, but we still are very true and authentic to who we are."

THE RIGHT THING TO DO

Alo’s beautiful Instagram photos are now riddled with customer complaints about the Falsetti lawsuit. Others voiced frustration that their comments have been deleted by the company. Regarding alleged comment censorship, Alo’s spokesperson told PhillyVoice, "We welcome meaningful conversations about our brand, providing the comments do not violate Instagram's Terms of Use, similar to any other business.”

MacGregor received some criticism for listing Alo’s brand ambassadors in her "Elephant Journal" essay. But she believes it was the right thing to do.

“Of course people need to hold brand ambassadors accountable for what a brand does, because they push people toward that brand,” she said.

“If 100,000 people follow one inspirational yogi and that person endorses one brand, then those 100,000 people are channeled to spend their money on that one brand, which can do a number of things with the revenue. They can give the money to charity. They can make more clothes. They can open a store. Or they can fund a lawsuit against one yoga teacher.”

MacGregor believes it’s no coincidence that Falsetti is that one yoga teacher, as she has devoted herself to being a voice for inclusivity and diversity in the yoga community, something Alo’s marketing still does not adequately reflect.

“People are paid vast amounts of money to portray that they’re just loving this brand," she added. "And I can tell you from my experience of this brand that [Alo] just wants you to fall in line.”

'THEY ARE FIGHTING TOOTH AND NAIL'

MacGregor also recorded video content for Cody prior to the Alo acquisition. Since the Falsetti lawsuit, she has tried to reacquire her content or, at the very least, have it removed from Alo’s platform, because she does not want to be associated with the brand.

According to Alo’s spokesperson, MacGregor was paid more than $536,000 for her content.

In her "Elephant Journal" essay, MacGregor wrote that she received $450,000, which she invested in her own yoga video platform, OMStars. When she began speaking out about Alo, MacGregor says she received a cease-and-desist letter from the company’s lawyers and an offer to reclaim her videos in exchange for nearly everything she was initially paid by Alo.

According to the Alo Yoga spokesperson, MacGregor's final offer was $25,000 down and then $50,000 more over two years, which came after she changed her terms four times. MacGregor said those claims are "patently untrue."

MacGregor also voiced complaints about Alo continuing to run Facebook and Instagram ads featuring both her and Falsetti. Alo’s spokesperson told PhillyVoice that (as of March 30th), “We are no longer running any ads that feature Kino.”

Ultimately, MacGregor thinks the lawsuit against Falsetti is an attempt to broadcast what mainstream corporate giants can do to independent businesswomen who fail to conform.

“Dana has already spent over $40,000 in legal bills and she has tried to settle with [Alo] repeatedly. They just refuse. Every little procedural turn, they are fighting tooth and nail. She just wanted her content taken down,” she said.

But Alo’s spokesperson feels the company is striving for compromise, telling PhillyVoice, "We are in active discussions with Dana and have been working for some time to settle this lawsuit. It's Dana, not Alo, who has been slowing the process down."

MacGregor believes the conflict could easily end in peace if Alo simply dropped the lawsuit.

“I’m not out here to take these guys down. I just want to effect change. I want Alo to do the right thing. The yoga community needs to keep constant pressure on them and refuse to back down until they do.”