Philadelphia joins cities around the world in show of solidarity 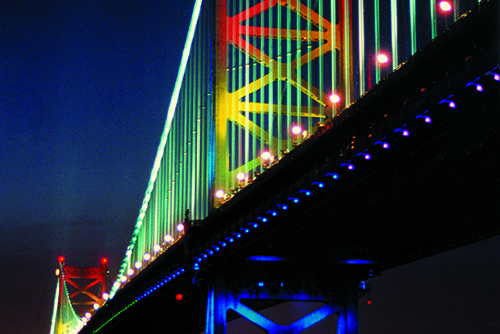 The Delaware River Port Authority announced Tuesday that the Benjamin Franklin Bridge will light up for several days to honor the victims of the Orlando shooting massacre at Pulse nightclub.

"Standing in solidarity with the victims of the Orlando shooting, the Ben Franklin Bridge will illuminate in rainbow colors on Wednesday, June 15 through Saturday, June 18," the DRPA said in a release.

Philadelphia's iconic bridge will join in the tribute shared at buildings, bridges and other structures worldwide.

Little Rock bridge lights for the victims of Orlando pic.twitter.com/wY6Sb7LVLR

#Sydney Harbour Bridge lit up in "support" of Orlando. However, the solution will take more than pretty lights... pic.twitter.com/aMMBPA1Rh8

The Bond Bridge in Kansas City lights up in support of #Orlando. pic.twitter.com/MNNfw0Uvfv

The Lowry Ave Bridge, Minneapolis, will be lit with rainbow lights in memory of #Orlando shooting victims. @Hennepin pic.twitter.com/j2FEJNBDey

The lights on the Henley Bridge are rainbow colors tonight to honor the victims in the Orlando nightclub shooting pic.twitter.com/1Oxt230Z9f

Forty-nine people were killed and another 53 were wounded in Sunday's attack, the most deadly shooting massacre in modern U.S. history.

On Monday night, thousands of Philadelphians converged on City Hall for a memorial to honor the victims and denounce violent acts of hatred.

An FBI investigation into the shooter remains ongoing.