Muppet characters were more than just friends, according to Mark Saltzman 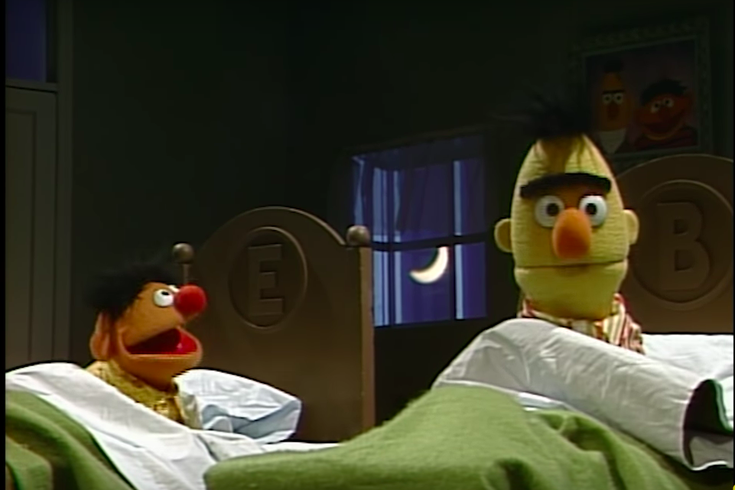 The Bert and Ernie characters on "Sesame Street."

The true nature of Bert and Ernie's relationship has finally been revealed after years of speculation.

Mark Saltzman, the writer behind the "Sesame Street" characters told Queerty this week that yep, the male Muppets were based on his own relationship with his partner Arnie and were always more than friends.

Saltzman, who started at "Sesame Street" in 1984, said that he wrote the characters without an agenda, but with intention to be a gay couple.

"I didn't have any other way to contextualize them," he told Queerty. "The other thing was, more than one person referred to Arnie and I as 'Bert & Ernie.'"

His longtime relationship always gave inspiration for the many arguments, tendencies and references in Bert and Ernie segments on the show, he said.

Puppeteer Frank Oz, who has been directing and producing Muppet characters for years, disputed the claims on Twitter on Tuesday.

"It seems Mr. Mark Saltzman was asked if Bert & Ernie are gay. It's fine that he feels they are. They're not, of course. But why that question? Does it really matter? Why the need to define people as only gay? There's much more to a human being than just straightness or gayness," Oz tweeted.

It seems Mr. Mark Saltzman was asked if Bert & Ernie are gay. It's fine that he feels they are. They're not, of course. But why that question? Does it really matter? Why the need to define people as only gay? There's much more to a human being than just straightness or gayness.

On Thursday, the show also issued a statement on Twitter, calling the two "best friends."

"As we have always said, Bert and Ernie are best friends. They were created to teach preschoolers that people can be good friends with those who are very different from themselves. Even though they are identified as male characters and possess many human traits and characteristics (as most "Sesame Street" Muppets do), they remain puppets, and do not have a sexual orientation."

Please see our statement below regarding Bert and Ernie. pic.twitter.com/6r2j0XrKYu

The statement is the same they issued back in 2011 when rumors spread and questions were asked. This week, some were prompted to question all Muppet relationships — like that of Miss Piggy and Kermit the Frog, who are clearly romantically involved.

Whether the intention to make them a couple was there or not during the creation of Bert or Ernie, it seems Mr. Oz is a little too vehement in his denial of things that Saltzman wrote.

All else I have to say on the matter: