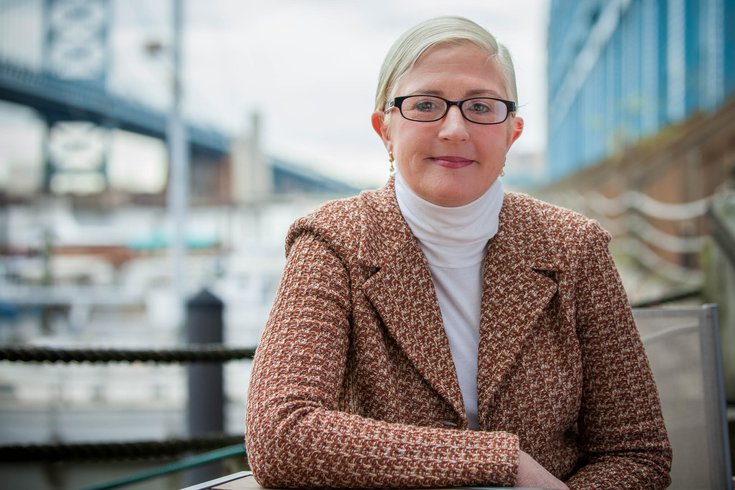 Emily Bittenbender, the owner of Bittenbender Construction, is seen here on the back patio of her company's Columbus Boulevard office.

Construction may be one of the most male-dominated industries there is. And Emily Bittenbender couldn’t be happier sitting at the top of that industry.

“I love working with blue-collar men,” said Bittenbender, the only woman to head a union-affiliated, commercial construction company in the Philadelphia region. “I love the fact that there are very few politics in our industry. Everyone’s just (like a) caveman, very direct: ‘Here’s the problem, get it done.’”

Bittenbender fits in well with that kind of crowd. She has a don’t-mince-words approach; her business card says, "Just get it done." She loves some stereotypically macho activities, like driving four-wheelers around the New Jersey Pine Barrens. It’s not hard to imagine how she rose through the ranks, becoming the first chairwoman of the General Building Contractors Association.

Even if she were a man, though, her story would still be remarkable.

At 24, she already was a project manager for a $42 million tower conversion project. At 29, Ed Rendell hired her to shake up the paralyzed capital project program of Philadelphia, and she pushed through $454 million worth of capital projects in three and a half years.

“Before I got to the city, it took over 1,000 days to get a contract approved because it had to go through 17 different approval processes," she said. "I was able to get that down to 30 days.”

On top of all that, she oversaw construction of the National Constitution Center. Her company, Bittenbender Construction, worked on Sister Cities Park, the Navy Yard's Central Green and even a skateboard park in Logan Square (“That was so much fun to build, oh my God!”). The next project, though, represents a huge new step for the company: building part of the redesigned LOVE Park.

“That’s very significant for us,” Bittenbender said. “LOVE Park is iconic to Philadelphia.”

This month, the Greater Philadelphia Chamber of Commerce named Bittenbender the winner of the 2016 Paradigm Award, its most prestigious prize for women in business. Her biggest priority, she said, is giving other women and minorities a hand up the industry ladder.

“What I like the most is to bring young people on board and mentor them and help on a one-on-one basis,” she said.

Take Angela McCaffery. Eight years ago, Bittenbender hired her as a receptionist. Now, she's chief operating officer and a partner in the firm.

It’s the same way Bittenbender moved up in the industry: People in power noticed her, liked her and decided to give her a chance.

Her foray in the construction industry was almost accidental. Her dream was to be a fashion designer in Paris, but she couldn’t sew. She studied interior and commercial design instead, started working on tower conversion projects for the city and caught the mayor’s attention.

Philly was in the midst of a fiscal crisis in the '90s. Still, it managed to acquire $500 million worth of bonds for emergency projects, and it was sure as hell going to use them.

“Rendell wanted me to burn down all the money," Bittenbender said. "So he hired me to bring a private-sector approach to project management and budget management.”

The administration merged various bureaucratic branches to create the Capital Program Office, and as its director, Bittenbender reported directly to the mayor.

“Everyone in the city knew that I had a task to do, and I had to get my job done, and people weren’t supposed to throw roadblocks in my way. And it worked,” she said.

'People toughed it out'

Her next big project was overseeing construction of the National Constitution Center, a dream come true for someone who is unabashedly “obsessed" with Colonial history.

In particular, she loves talking about the history of where she lives in the Pine Barrens in South Jersey. The area was a real-life hive of villainy, a “nest of rebels” where privateers would hide their loot after raiding British ships. Her house sits on property that belonged to an actual pirate.

“I really get into the characters. I really focus on the biography of these guys who emigrated here and had nothing,” she said.

Even her own history is rather colorful. Her ancestor, Conrad Bittenbender, emigrated from Germany in the 1730s, only to die in a clash with Native Americans. His wife raised four children on the wild frontier by herself.

“I really relate to my Bittenbender pioneering roots and the fact that woman had so much chutzpah to stay there and raise the kids by herself,” Bittenbender said. “I just love stories of history and how people toughed it out.”

She admitted people think she’s “just tough all the time” as well. In her industry, she has to be. But even this blue-collar gal has a soft side.

“I think what people don’t know is, like, what a sap I am,” she said. “I really am extremely loving and emotional and very loyal to my friends.”