Star Harry Smith discusses playing a playwright and working on his American accent. 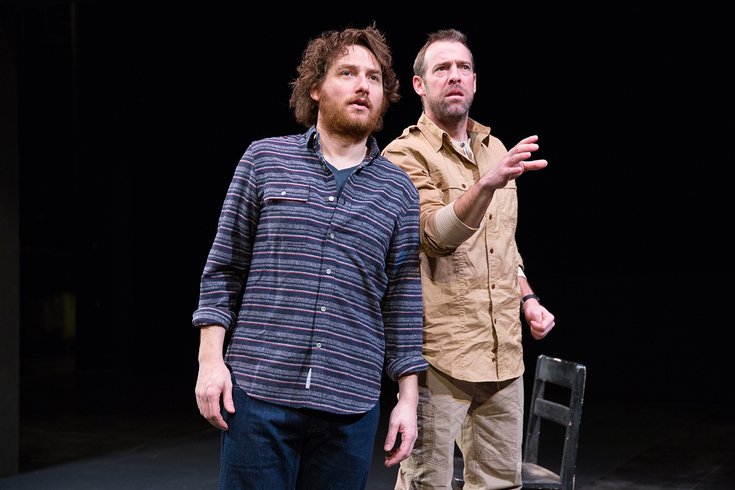 Harry Smith and Ian Merrill Peakes star in "The Body of an American."

Read More
When photojournalist Paul Watson took a photo of a dead American soldier being dragged through Mogadishu in 1993, he believed he heard the soldier say to him "If you do this, I will own you forever.” That photo went on to win a Pulitzer Prize and Watson's story caught the attention of Dan O'Brien, a playwright who also believed in hauntings. The two began a friendship via email, eventually leading them to meet up in the Arctic Circle.

"The Body of An American," playing at the Wilma Theater until Feb. 1, tells the pair's unusual story in an equally unusual way. Though the play features dozens of characters, the cast is made up of just two actors: Harry Smith as O'Brien and Ian Merrill Peakes as Watson. Neither actor leaves the stage during the show.

Though Smith is currently based in Philadelphia, working here and in New York City, he's a native Brit who only moved to the States in 2010. For that reason, getting the opportunity to work on his American accent in this role has been one of Smith's favorite aspects of the job. "Working in a different accent with different rhythms is one way of breaking bad habits and finding characterizations that aren't close to your own," Smith told PhillyVoice.com.

Finding this characterization was especially important for Smith's role; not only did O'Brien write "The Body of an American," he also attended rehearsals and plans to attend events surrounding the production. For Smith, playing a playwright in his own play was, in a word, "terrifying!" "It was great to be able to meet [O'Brien], and he gave us lots of insights into the play. I think I got the stamp of approval!" Smith said. In addition to perfecting O'Brien's American accent, Smith worked with a coach on South African, Somali and Inuit dialects, among others, for his many characters.

To Smith, this play is a must-see for anyone curious about what it's like to be a photojournalist documenting war. "I think this is a play for anyone who strives to make connections with other people, and who recognizes the struggle for human fellowship in a world where we are increasingly being distanced from one another by technology," Smith said.

As an actor, Smith recognizes that need for connection. The intimacy of the Philadelphia theater scene is one of his favorite parts about it, something he calls "a real treat." "There are loads of brilliant theatre practitioners here, who respect and support each other both personally and professionally," Smith said. "You don't get that sense of community in New York or London."

The Body of an American