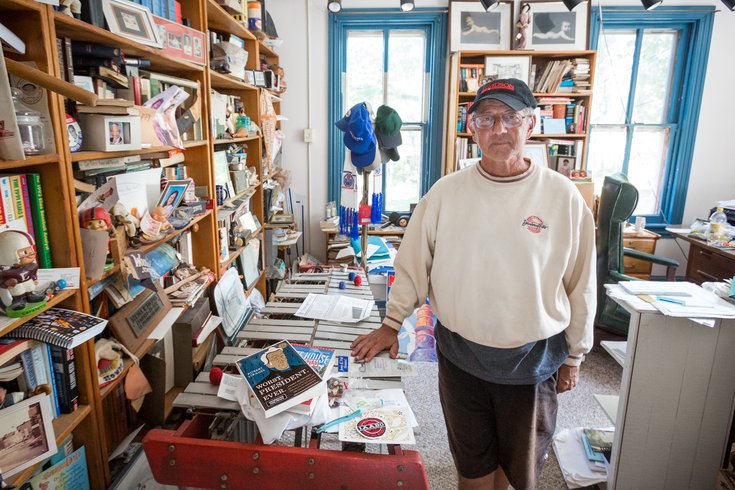 Robert Strauss in his Haddonfield, New Jersey, home office. A copy of his lastest book, 'Worst. President. Ever.' is on the xylophone in the foreground.

Robert Strauss thinks the Worst. President. Ever. has a lot to teach us.

“Why can’t we learn from failure as much as from success?” asks Strauss, a successful and widely-published freelance journalist for decades.

Strauss is a dogged contrarian, the last man off the bench for his tiny liberal arts college's freshman basketball team.

And while the Carleton College philosophy major didn't manage to single-handedly win the game, his buzzer-beating basket prevented his sorry team from being doubled, earning the South Jersey native an irony-filled nickname: God.

Not a bad handle for a relatively short athlete who is more a persevering plugger than a naturally-gifted talent.

Which may explain his fascination with two questions:

"What makes a president great?"

But even more urgently, "What makes a president awful?"

Or the "Worst. President. Ever." – the title of his new book about our 15th president, James Buchanan of Pennsylvania.

It certainly isn't a stellar resume, or even related government experience, Strauss' research has taught him. After all, "Ten Cent Jimmy" looked great on paper.

And yet he failed time after time.

As bad as folks fear Hillary Clinton or Donald Trump might be as commander-in-chief, Strauss is convinced neither will come close to being the worst president ever. Nah, Buchanan has a lock on that title, Strauss contends.

To earn the honor of worst president for themselves, Hillary or Donald would have to:

• Plunge the nation into civil strife and foment uprisings

Hmm. Perhaps that is why Strauss’ publisher, Lyon’s Press, printed the Buchanan book before the 44th president takes office.

Buchanan was possibly the country’s first gay commander-in-chief, but there is nothing definitive. Buchanan was never married, lived for years with another man, Senator William Rufus King, in a Washington boarding house, and wrote longingly when his companion was away. But Strauss thinks Buchanan was more likely asexual, more in love more with power than any person.

More indisputable is the consensus among historians (and Strauss) that Buchanan was definitely the worst president, as in 43 out of 43. Dead last on many lists. (And only to be followed by arguably the nation's greatest president.)

“Hey, I’ve got a guy who started a Civil War,” said Strauss of Buchanan’s failure to address the secession of Southern states before war inevitably broke out.

Buchanan's many failings are the fascination for Strauss. 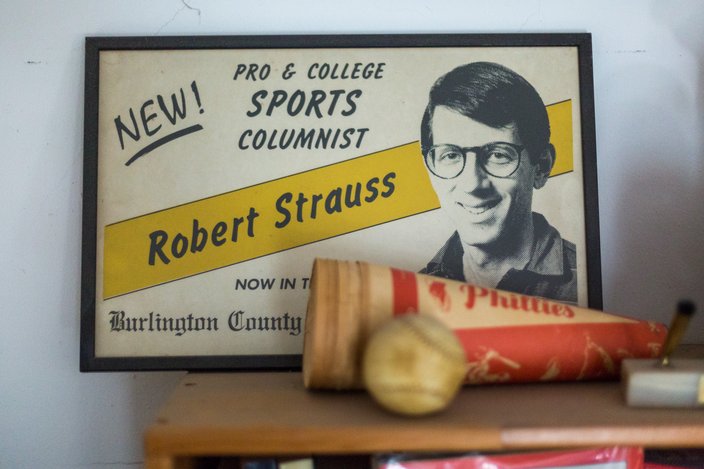 An insert that would appear in on-street newspaper boxes announces Strauss as a columnist for the Burlington County Times.

You say you don’t really recall the lowlights of the Buchanan presidency? There’s a reason.

Both popular and serious historians tend to focus on the greats and near-greats – Washington, Lincoln, both Roosevelts, Jefferson.

Despite Buchanan’s long list of failures, historians have largely ignored the only American president from Pennsylvania, who lived and died in Lancaster after just one term in the White House. 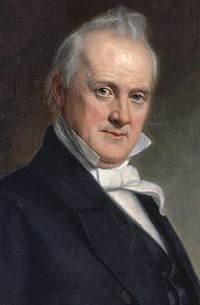 This 1859 portrait of James Buchanan, oil on canvas, was painted by George P.A. Healy.

For Strauss, the essential irony is that while Buchanan had a great resume and deep experience, he failed to assert himself as presidential once elected to the highest office.

“Buchanan chose the wrong path at every fork in the road,” wrote Strauss.

BUSY WITH THE BOOK

Buchanan's failure to rise to the occasion is, of course, what appealed to Strauss, a freelancer since 1995.

Strauss, though he's won many journalism awards, remains modest about his work, explaining it is as good as he can do – given the volume of what he does.

He routinely juggles half a dozen writing assignments or so. Consistent good quality, not infrequent excellence, are the key to making a living as a successful freelance writer, he said.

There are thousands and thousands of Robert Strauss bylines on the stories he’s filed. Many of them are preserved, more or less, in his Haddonfield home in South Jersey.

With a career that began in 1974 and included nine newspapers, including stints as a staff writer at the Philadelphia Daily News, sports producer on KYW and writer for “Sports Illustrated,” he has hundreds, maybe thousands, of those print stories piled up in his home office, some in stacks, some in boxes, some on shelves.

And there a few on the silent xylophone he uses as an overflow table. 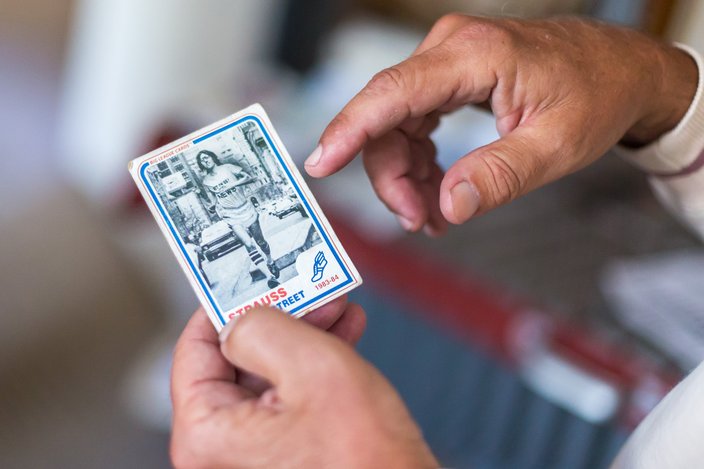 A photograph of Strauss once used as a promotion by the Philadelphia Daily News of a new race on Broad Street, predating the Broad Street Run, was made into playing a card as a gag gift by a friend.

Given the condition of his cluttered second-floor office in his Haddonfield home – his wife, Susan Warner, a former journalist who now works at Pew Charitable Trust, has her own home office on the third floor – it’s a wonder he’s managed to write a single story, let alone the more than 1,000 stories he’s had in just the New York Times in the past 22 years.

“I’ve never thrown anything out,” he explained, surveying the wreckage.

There’s lots of memorabilia, photos, mostly of sports figures and also his daughters, as well as journalism and athletic awards.

There are also reminders of the more than 100 countries he’s visited, as well as a journal for each nation.

“My favorite detritus,” he concedes.

There’s also a closet filled with T-shirts and sweats threatening to cascade to the floor because it is impossible to close the door.

Robert Strauss has been all over the world, having visited 100 countries at last count, his office is lined with artifacts from his life as a journalist, traveler, father, and son.

The contents of the closet, looking like a badly organized thrift store, are justified because he either plays tennis or shoots hoops – and sometimes both – every day, and so he writes while wearing clothes that allow him to walk out of his office and go play at a moment’s notice.

He’s also been an adjunct professor at several local colleges and universities, most notably at Penn and Wharton. He continues as a mentor for Penn’s journalism internships. And he continues to network with past colleagues and students.

He wrote the 2012 memoir “Daddy’s Little Goalie,” about raising daughters Ella and Sylvia as, in his own words, “girl jocks” whom he taught to switch-hit. He wore a Davidson College cap, where both his daughters went for their education, on the day he spoke with PhillyVoice.

While he usually juggles a half a dozen projects, the publication of his new book has kept him busy promoting the book, including writing or getting mentioned in the Los Angeles Times, the New York Times and Politico.