There's a thing that now exists on the Internet that was just published by Boston Globe dolt Dan Shaughnessy that is so far beyond bad that you should immediately go thank your least favorite Philadelphia columnist for not being this unoriginal and untalented.

I don't even know where to start.

I guess I'll just post a link to it? Here you go. Congrats, Dan, I guess your awfulness has achieved the desired result.

"Philadelphia Eagles coach Doug Pederson seems like a very nice fellow and has a serviceable NFL résumé as a player and coach."

As a player, Pederson lasted 14 years in the NFL as a career backup. His professional coaching record in two years with the Eagles is 20-12, along with 2-0 in the playoffs. After Bill Belichick's first two seasons in the NFL, he was 13-19. We're certainly not saying Pederson is anywhere near the coach that Belichick is. Just offering perspective on the fast start that Pederson has gotten out to in his professional career.

No doubt Belichick respects Pederson. It’s the professional thing to do. Pederson was an NFL quarterback for a long time and made his bones as an offensive coordinator for the Kansas City Chiefs. Now he has his Eagles in Super Bowl LII.

All niceties aside, deep down Belichick has to be thinking . . . there’s no way I can lose a Super Bowl to this guy!

I'd say there's a better bet he's wondering why some reporter keeps trying to get a whiff of his underpants.

Maybe. We'll find out on Sunday.

Some of the men listed above had a chance. Martz probably had a better team than the Patriots with his heavily favored Greatest Show on Turf back in 2002. Fox and Reid came to their Super Bowls as veteran coaches with impressive résumés. Carroll had already won a Super Bowl with Seattle and is actually a year older than Belichick.

But unlike Tom Coughlin, none of them had the right stuff to beat the Hoodie in the big game. All came close (every Belichick Super Bowl has been decided by 6 points or fewer), but ultimately these coaches were beaten by poor clock strategy, loser defensive schemes, and — in Carroll’s case — the single stupidest decision in the history of championship competition.

You can’t play back on your heels against Belichick in a Super Bowl. You can’t be indecisive. You can’t coach scared.

I worry that poor Doug Pederson might commit all these sins. He’ll be another guy looking all flummoxed — like a man in the rain stranded on a train platform — while Belichick peers across the sideline with a minute left in the game and says, “Yeah, I got this.’’

Let's see a visual of that. 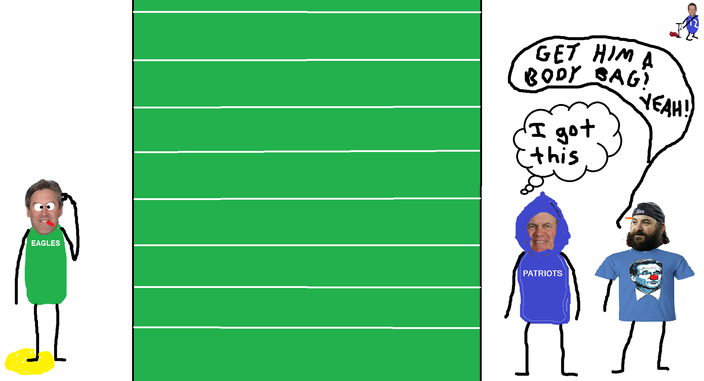 And next fall you’ll be able to watch the whole emasculation of Pederson when Kraft Productions airs “Do Your Job III.’’

"Kraft Productions?" Someone needs to rush Kraft to the proctologist to dislodge a sportswriter.

Former Belichick operative Mike Lombardi (assistant to Patriots coaching staff, 2014-16) last year said Pederson “might be less qualified to coach a team than anyone I’ve seen in my 30-plus years in the NFL.’

Yikes. Lombardi has since backed off slightly and tweeted that Pederson “won me over,’’ but the comment stands as a harsh appraisal of the man in charge of the Eagles this Sunday.

Good God. That Lombardi video was literally the worst take of 2017. Lombardi himself would undoubtedly love if it never existed. It's unfathomable to me that any human being would use it as a supportive argument, much less a sportswriter, who has been doing this for how many years?

Holy shit, Dan. You've been a sportswriter since 1981? You've been doing this for 37 friggin' years?

Anyway, let's just get through the rest of this.

Perhaps I’m being unfair. Perhaps Pederson is a Shula/Halas in the making. Sorry, not feeling it. There’s simply no indication that Pederson is up to the task of coaching against Belichick in a game of this magnitude.

He is destined to get pantsed — just like Doug Marrone, Mike Mularkey (fired immediately after losing to New England in this year’s playoffs), Jack Del Rio, Mike Tomlin, and all the other wannabes who bowed at the altar of the Hoodie, then got their lunch money stolen. These guys coach like fraidy cats, and Cheshire Bill swallows them for breakfast, then smiles.

"Bowed at the alter of the Hoodie, then got their lunch money stolen." Hmm. Is it common for priests to steal lunch money. I guess I'm not getting that reference. But I digress.

Pederson has gone for it on 4th down 53 times over the last two years, by far the most in the NFL. If there's one thing he doesn't do, it's coach scared.

Pederson grew up in Bellingham, Wash., and played football at Northeast Louisiana. He was an NFL quarterback with four teams, starting a mere 17 games over 10 seasons. His top moment was holding the clipboard for Brett Favre in Green Bay’s 1996 Super Bowl victory over the Bill Parcells Patriots.

I'll ignore the obvious point to be made here that Belichick never played pro ball, not that it matters, and simply point out that Shaughnessy missed a clear opportunity to say that Pederson is from Smellingham, (Doesn't) Wash.

Thirteen years ago, when Belichick and the Patriots were winning the Super Bowl in Jacksonville against the Eagles, Pederson was retiring as an active player, taking a job as head coach of Calvary Baptist Academy in Shreveport, La.

Pederson is 49. Belichick is 65. So, Belichick had success before Pederson even began to think about coaching in the pros. Amazing insight!

I mean, someone could say, Dan Shaughnessy was writing for The Globe when I was 4, but I guarantee I'll never write a column this bad in my life.

His four seasons at Calvary represented the totality of his head coaching career before he took over the Eagles in 2016. Prior to being named head coach of the Eagles, Pederson was offensive coordinator for Reid’s Chiefs in 2015.

This bring us to another example of why Pederson can’t beat Belichick. Remember the Chiefs’ horrible clock management in a 27-20 playoff loss to the Patriots in January of 2016? Blame it on Pederson.

The Patriots led, 27-13, with 6:29 remaining when the Chiefs got the ball on their own 20. With Pederson calling the plays, the Chiefs proceeded to use almost the entire remaining clock to score a single touchdown. It was mind-numbing.

Kansas City needed two TDs, but used five minutes and 16 seconds to move 80 yards for the score that cut the lead to 27-20. The Chiefs repeatedly ran 20-28 seconds off the play clock between plays. They ran pass plays over the middle. When they finally lurched across the goal line, there was only 1:18 left on the clock.

Naturally, they never got the ball back.

OK, now, while this column was clearly researched beyond reproach, if you'll allow me, I'd be happy to explain that game. Andy Reid's strategy was to bleed a lot of clock on that long-ass Chiefs drive, keep all three timeouts, kick off, and then bait the Patriots into running three times, punting, and getting the ball back. Basically, they didn't want Tom Brady throwing it on them anymore.

Stupid strategy? Yeah, it's certainly not the approach I'd have taken. While Pederson called the plays on that drive, it was Reid's strategy to milk the clock in that fashion. So you can certainly blame Pederson for it if you'd like, but you'd be wrong.

And if writers actually bothered to watch an Eagles game or two, they'd see that Pederson's clock management this season has been nothing short of stellar.

Good luck with this guy on Sunday.