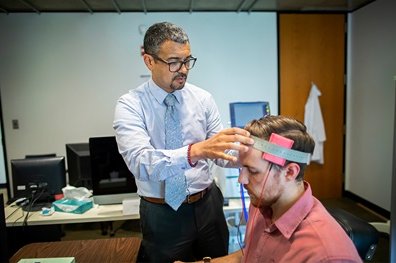 A group of researchers led by Dr. Roy Hamilton, left, found that brain stimulation can reduce a person's intention to commit violence, including sexual assault, by more than 50 percent.

Brain stimulation can dramatically reduce a person's intention to commit violent actions, including sexual assault, according to a new study.

By stimulating the prefrontal cortex – the area of the brain that controls complex ideas and behaviors – violent intentions can be diminished by more than 50 percent, researchers found. Additionally, stimulation also increases the perception that physical and sexual violence is morally wrong.

Those were the key findings of a study conducted by researchers from the University of Pennsylvania and Nanyang Technological University in Singapore. Their conclusions were published in the Journal of Neuroscience.

"Perhaps, the secret to holding less violence in your heart is to have a properly stimulated mind," said Roy Hamilton, an associate neurology professor at Penn's Perelman School of Medicine.

As part of the study, 81 healthy adults were randomly assigned to one of two groups. The first group received prefrontal cortex stimulation for 20 minutes. The second group received a placebo treatment that lasted 30 seconds.

After receiving stimulation, the researchers presented the participants with two hypothetical scenarios about physical and sexual assault. They asked them to rate the likelihood that they would commit such an act.

The researchers concluded that simple biological interventions, like the transcranial direct-current stimulation carried out in the study, have the potential to reduce violent behavior.

Adrian Raine, a Penn professor of criminology, psychiatry and psychology, said considerable attention has been given to the social causes of crime. But research shows that biological factors account for half of the variance in violence.

"This is not the magic bullet that's going to wipe away aggression and crime," Raine said. "But could transcranial direct-current stimulation be offered as an intervention technique for first-time offenders to reduce their likelihood of recommitting a violent act?"

Still, researchers stressed that more studies are necessary before accepting prefrontal cortex stimulation as any kind of treatment for reducing violence.

"We're trying to find benign biological interventions that society will accept – and transcranial direct-current stimulation is minimal risk," Raine said. "This isn't a frontal lobotomy. In fact, we're saying the opposite, that the front part of the brain needs to be better connected to the rest of the brain."