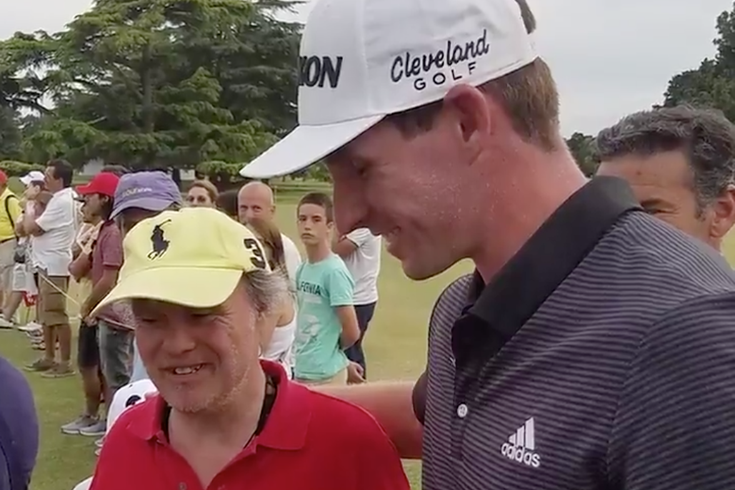 Brandon Matthews, 25, a Pennsylvania native, meets with a fan with Down syndrome who interrupted a crucial putt during the Argentine Open on Sunday.

Brandon Matthews, a Pennsylvania native and Temple University graduate, missed an eight-foot putt at the Argentine Open on Sunday that cost him a shot at qualifying for the 2020 British Open.

Matthews, 25, was trying to extend a playoff with Ricardo Celia to a fourth hole when a fan yelled out from the crowd. It caused him to give "a little too much right hand" to the stroke, Matthews told Golf Digest.

Matthews was a bit frustrated in the moment, but he later learned that the man who interrupted his putt was a middle-aged man with Down syndrome.

After finding this out, Matthews, whose mother used to manage group homes for Goodwill, wanted to meet him. He spoke with the fan for a few minutes before giving him a hug and signing a glove and golf ball for him.

After growing up in Dupont, Luzerne County, Matthews went on to play collegiate golf at Temple from 2012 to 2016. During his college career he was named an honorable mention All-American, the first athlete at Temple to receive the honor since 1988. He turned professional in 2016.

His performance last weekend at the Argentine Open was his best performance since winning the PGA Tour's Molino Cañuelas Championship by one stroke in 2017.

Matthews finished 11-under par before falling in the playoff. While the loss stung stung, Matthews told PGA Tour, "Some things in life are just bigger than golf."