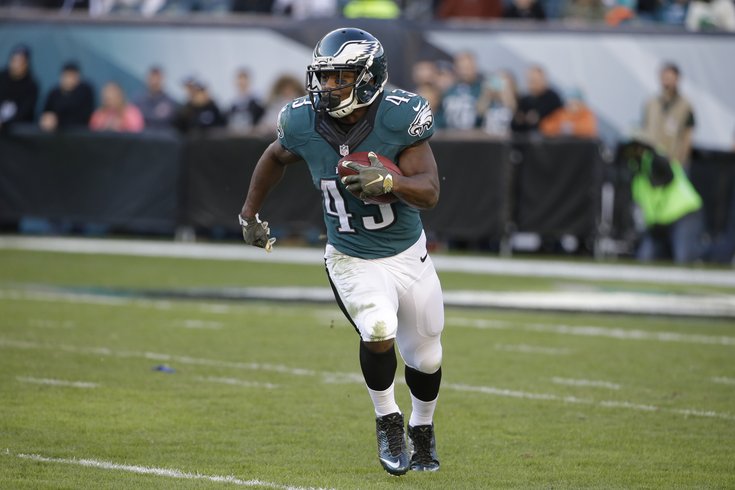 Darren Sproles just takes a nap on the plane. Or reads US Magazine or something.

On his trip back from New England on the Eagles' charter flight, DeMarco Murray reportedly complained to Jeffrey Lurie about his playing time.

Today, Chip Kelly confirmed that Murray did indeed talk to Lurie on the plane.

"He sat next to Mr. Lurie on the plane on the ride home," said Kelly. "They were both sitting in first class and talked about the game and what happened with it." It is unknown whether Murray or Lurie got the armrest, but I'm told they shared a small bag of peanuts.

As a follow-up, the next logical thing for any skilled reporter to do in this situation, of course, would be to ask other running backs if they too complained to the owner on an airplane about their playing time. Earlier this season, Darren Sproles (rightfully) expressed that he would like more touches in the Eagles' offense, which made him a primary candidate for that line of questioning.

Asked if he complained to Chip Kelly or Jeffrey Lurie about his lack of touches, Sproles replied, "Nope."

When asked if he ever thought of going to Kelly or Lurie to complain about playing time, Sproles replied, "Nope."

When asked why not, Sproles replied, "Nope."

When another reporter entered the conversation late, Sproles was asked again (but more specifically) if he ever complained to the owner of the team on an airplane about his lack of carries, Sproles said, "No I haven't."

When asked if he ever sat next to the team owner at all, Sproles replied, "No."

So there you have it. We'll update the rest of the running backs and whether or not they've complained to the owner on an airplane about their carries as we learn more.

In other news, former Eagles back LeSean McCoy said in a conference call that he would not shake Chip Kelly's hand. He did say, however, that he would shake some of his former teammates' hands, talk to Lurie, and give Duce Staley a big hug. Unfortunately, PhillyVoice was unable to confirm if McCoy intended on giving Staley a bro hug or a full-on "arms wrapped around each other" hug.

If you have any info on how McCoy intends to touch or not touch his former co-workers this Sunday, please contact our tip line.