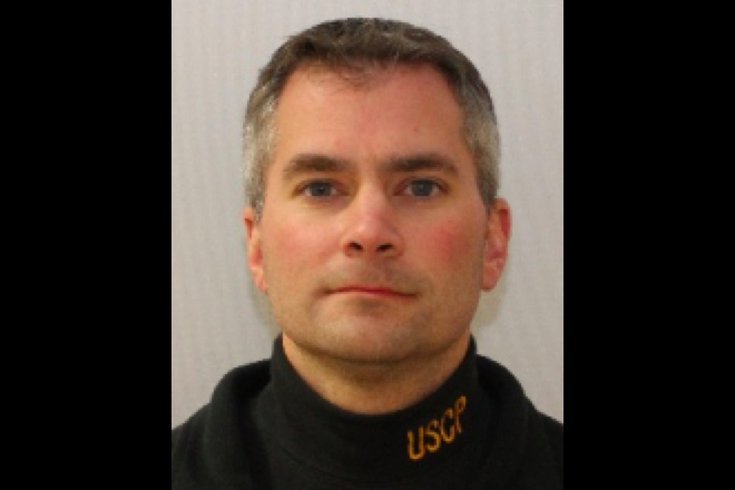 Brian Sicknick, a U.S. Capitol police officer died on Jan. 7, 2021, after serving on the frontlines during the Jan. 6 insurrection in Washington, D.C. Two men are now charged with using bear spray on Sicknick and two other police officers, prosecutors said. Sicknick is originally from South River, New Jersey.

Two men who were part of the Jan. 6 riot at the U.S. Capitol and allegedly used bear spray against Capitol police Officer Brian Sicknick and other law enforcement have been charged with assault and related offenses. Sicknick died in the hospital a day after the insurrection.

According to prosecutors with the U.S. Attorney's Office for the District of Columbia, Julian Elie Khater, 32, of State College, Pennsylvania, and George Pierre Tanios, 39, of Morgantown, West Virginia, allegedly are seen on video spraying police in their faces and eyes with an unknown chemical substance.

In one video obtained, investigators said Khater is heard talking about the substance with Tanios.

"Give me that bear s***," Khater allegedly says.

"Hold on, hold on, not yet, not yet ... it's still early," Tanios allegedly replies.

Khater is then seen removing a canister from Tanios' backpack and walking through a crowd to reach the police perimeter, prosecutors said. One video shows Khater holding a canister up in the air and pointing it in the direction of police while moving his arm from side to side.

The video shows Sicknick and two other police — a Capitol officer identified as C. Edwards and a D.C. cop identified as D. Chapman — reacting to being sprayed and retreating with their hands covering their faces. They are seen rushing to find water to wash out their eyes, according to prosecutors.

Sicknick, 42, who was originally from South River, New Jersey, died at a hospital the morning after the riot. He had been admitted for care when he collapsed after returning to his division.

Authorities have not yet released an autopsy or toxicology report for Sicknick's death. At the time, Capitol police said Sicknick "was injured while physically engaging with protesters," but the Washington Post reported Monday that Sicknick did not die of blunt force trauma.

Bear spray, pepper spray and mace are classified as nonlethal, though they can cause reactions in people with underlying conditions.

Investigators have said Sicknick's death would be investigated as a homicide. It remains unclear whether Khater and Tanious could face more serious charges.

In late February, the FBI said it had identified at least one of the men believed to be involved in spraying Sicknick with the chemical irritant.

Sicknick was a veteran who had served in the New Jersey Air National Guard and was later stationed at Joint Base McGuire-Dix-Lakehurst in Burlington County. He joined the U.S. Capitol Police in 2008 and most recently was a part of the department's First Responders Unit.

Sicknick's family has not commented publicly since releasing a statement in the aftermath of his death.

"Many details regarding Wednesday's events and the direct causes of Brian's injuries remain unknown and our family asks the public and the press to respect our wishes in not making Brian's passing a political issue," Sicknick's brother, Ken, said at the time. "Please honor Brian's life and service and respect our privacy while we move forward in doing the same. Brian is a hero and that is what we would like people to remember."

Khater and Tanios were charged Monday with conspiring to injure officers and assaulting federal officers, among other related weapons charges and offenses for their alleged actions during the Jan. 6 riot.

More than 300 people have been charged with crimes for their alleged involvement in the Capitol insurrection, which was led by an angry mob supporting former President Donald Trump. According to PhillyMag, Pennsylvania has more residents facing charges in connection with the Jan. 6 riot than any other U.S. state.

Sicknick's death was referenced in one of the articles of impeachment passed by the U.S. House of Representatives, of which Trump was ultimately acquitted by the U.S. Senate.