Thanks to heroic actions, Veronica Awdalla was born in July 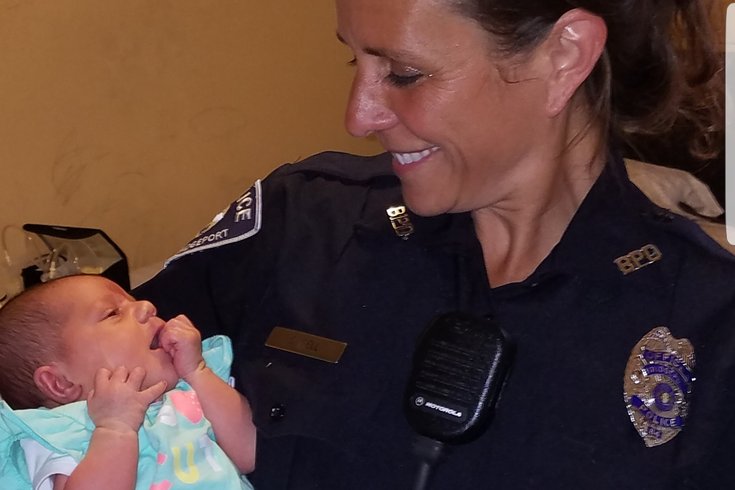 The news coming out of the tiny Montgomery County borough of Bridgeport hasn’t been all that positive of late.

At Tuesday night’s Borough Council meeting, though, a police officer will be honored for quite literally saving a newborn baby’s life this summer.

The commendation will recognize Officer Shannon Sell for her response to a call for a medical emergency early in the afternoon of July 9.

There, a woman named Noah Hanna was actively in labor at her home. As ambulances were tied up on other calls when Sell arrived at the scene, she found herself in the dual role of police officer and obstetrician.

“I was able to see the head crowning,” Sell explained. “The delivery was certainly not an easy one, as the baby was in respiratory distress.”

“Due to the unstable situation, (former police) Chief Mark Shannon drove the newborn and medics to Einstein Hospital,” Sell recalled. “I remained with Noah Hanna and tended to her medical needs until a second unit from Plymouth Ambulance arrived.”

Despite the frightening nature of the call, tragedy was averted as Noah Hanna and Emil Awdalla became the proud parents of a baby girl named Veronica – she weighed 7 pounds and 10 ounces at birth – who has two older brothers.

In other news out of Bridgeport, the controversial, potential merger of the 12-officer police force into the Upper Merion Township department is also on the agenda for Tuesday night's meeting at Borough Hall.

Also up for discussion is a motion to appoint a replacement for former Borough Councilman Bill Lawless, who resigned earlier this month.

From Mayor Mark Barbee's perspective, the issues are somewhat intertwined, as residents have been turning out in droves to tell elected officials they want to keep their police department as it is.

Evident at recent council meetings is a special connection between officers and the residents who fear that would be lost under a merger. Barbee said Sell's work as the borough's "juvenile officer" is part of that dynamic.

"Her wide range of experience has represented the borough in a big way and I am proud to honor extraordinary police work such as this," he said this week. "Something as special as taking part in the deliverance of a newborn baby deserves to be commended. It’s a moment we can all come together and be proud of."