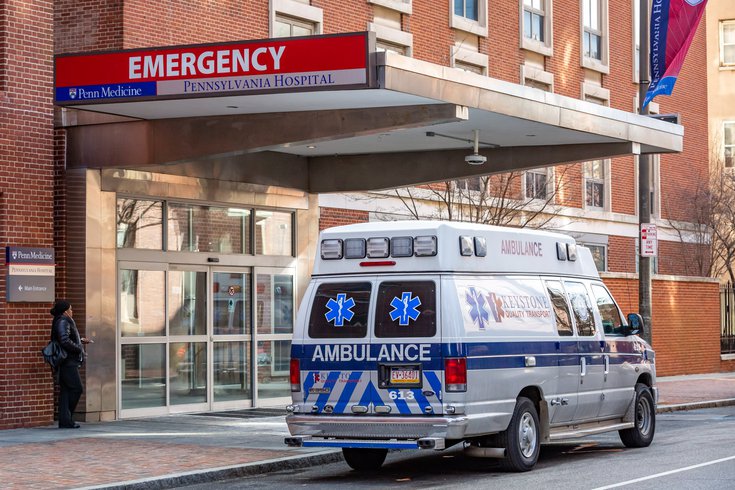 An ambulance outside the Emergency Department at Pennsylvania Hospital

A program designed by researchers from the University of Pennsylvania to encourage the use of buprenorphine significantly increased its use in emergency departments, a new study finds.

Buprenorphine – a drug that can help people overcome opioid addiction – stabilizes withdrawal and reduces cravings. Research has shown that not only does it help people with opioid use disorder stay in treatment, but it also reduces overdose deaths and other associated complications.

Studies also have shown that initiating buprenorphine in emergency departments improves patient's engagement in treatment, but there are still many barriers to its use.

Despite its effectiveness, patients who may benefit from buprenorphine don't always have access to it. Many doctors are not trained in administering it and those who are don't always prescribe it.

To encourage its use in the emergency department setting, the Penn researchers created a program that incentivized training and connect patients to care.

The program was tested at three Penn Medicine hospitals and led to a sixfold increase in treatment. The findings were published in the Annals of Emergency Medicine.

Until recently, doctors needed an X-waiver to administer buprenorphine, which required participating in training courses. Those restrictions have been loosened in 2021, but physicians still need to register in advance on a government website.

During the program, financial incentives were offered to physicians to complete the training. Within six weeks, the percentage of doctors who underwent the training rose from 6% to 90%.

The researchers also implemented a system to identify patients through electronic health records so they could be connected immediately to peer recovery specialists while they were still in the hospital.

The percentage of patients with opioid addiction who received the drug in emergency departments increased from 3% to 23% between March 2017 and July 2020 – a period that included 18 months before and after the program launched.

This translated into a 25% increase in the likelihood of patients receiving buprenorphine during their ED visits. And this rate of improvement was not only sustained, but increased a year after the program was initiated.

However, the researchers found that not all doctors authorized to administer the drug did so. Some gave it to 61% of their patients with opioid use disorders, while others didn't give it to any.

"The fact that some physicians in our group were able to provide this evidence-based treatment to more than half of their patients while others had the ability to do so, but never did, showed there was much more work to be done to nudge clinicians and make offering this treatment a default process," said Dr. M. Kit Delgado, an assistant professor of emergency medicine and epidemiology.

From a focus group of 29 emergency department doctors or nurses, they learned that the algorithm for the automated process they developed wasn't specific enough to find all eligible patients.

"Moving forward, we're going to test different ways to better ensure that patients we are discharging with buprenorphine prescriptions have a warm handoff and engagement with ongoing addiction treatment," Delgado said. "Starting this medication is the best first step, but there are many more on the long-term path to recovery once they leave the hospital."