Calling all call-ups: Who the Phillies could add when rosters expand next week 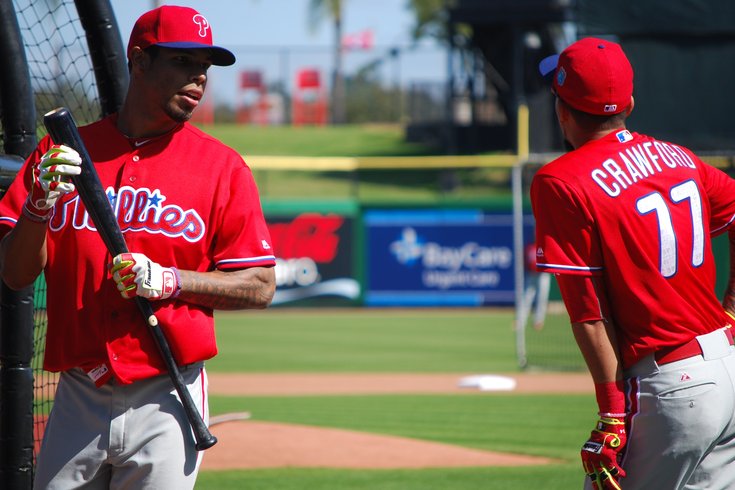 Nick Williams, chatting with fellow top prospect J.P. Crawford in spring training in Clearwater, Fla., is a favorite to join the Phillies roster next month, if not next week, when major league rosters expand on Sept. 1.

The Phillies, like every major league team, can take advantage of the calendar a week from today and summon an army of minor leaguers to the major leagues as rosters expand for the season’s final month.

But don’t expect to see a dozen new players overcrowding the home clubhouse at Citizens Bank Park late next week. The Phillies top two affiliates, Triple-Lehigh Valley and Double-A Reading, are both currently in line to play in their league’s respective postseasons, which take place during the first two weeks of September.

And everyone in the Phillies organization values their prospects ability to play in a winning environment in an effort to enrich their development.

“I think it starts from the minor leagues,” manager Pete Mackanin said last week. “When you have winning teams it means you have good players. You weed out the good ones and find out who can win at this level.”

So keeping, say, Nick Williams, at Lehigh Valley for another week or two (before joining the Phils in mid-September) will help his development?

“The benefit is that you want to develop a winning culture,” Mackanin said. “You want your guys to want to win games. That has to be their most important goal, instead of looking out for themselves to have a good year. You want them to have good years, but at the same time do everything it takes to win a game. Get a bunt down. Move the runner. Make the plays. Make the pitches.”

Still, the Phillies will be getting reinforcements from their minor leagues. Not everyone will be sticking around for the International or Eastern League playoffs.

Here’s what you can probably expect from the Phillies in their September call-ups:

Hector Neris appeared in his 64th game of the season on Wednesday night; no major leaguer has pitched in more games.

The Phillies are very aware of the workload of their relievers this season, and that workload is only expected to increase when an uncertain starting rotation becomes even more uncertain in the season’s final month, when Vince Velasquez will be shut down at some point and the trickle-down effect will be felt in the ‘pen.

So take just about every reliever on the 40-man roster (you’ve already seen most of them in the big leagues at some point this year) and expect some to join the Phillies on Sept. 1 and others to follow in the week or two that follows.

Luis Garcia, Elvis Araujo, and Colton Murray – come on down. New left-hander Patrick Schuster (claimed off waivers this month) is a good bet to get a look, and perhaps we’ll witness the long-awaited return of Dalier Hinojosa, too. It wouldn’t be a shock at all to see four of those five names join the Phils in the next two weeks.

The trio of David Buchanan, Alec Asher, and Phil Klein could factor in, too. Someone will have to jump into Velasquez’s rotation spot, and if Jake Thompson continues to struggle, someone might have to jump into his spot, too.

The Phillies aren’t likely to summon, Triple-A shortstop J.P. Crawford, the organization's top prospect (and a consensus top-five prospect in all of baseball).

Why? The mass influx of prospects into the Phillies farm system within the last two years will have an effect on who Matt Klentak and Co. will and won’t add to the roster in September.

The Phillies have nearly a dozen prospects that must be added to the 40-man roster this winter in order to prevent them from being selected in the Rule 5 Draft in December. Among those players: outfielders Nick Williams, Dylan Cozens, Andrew Pullin, Carlos Tocci, and Jose Pujols, right-handers Mark Appel, Ricardo Pinto, Ben Lively, and Nick Pivetta, catcher Andrew Knapp, and infielder Malquin Canelo.

Per Rule 5 rules, players who were 18 or younger on June 5 preceding the signing of their first contract must be protected after four minor league seasons, and players 19 and older must be protected after three seasons. Now, the Phillies may not protect all of these prospects: remember, a team that selects a player in the Rule 5 Draft must keep them on their active 25-man MLB roster all season.

It would seem unlikely a guy like Pujols, who is just 20 and has yet to play above Low-A, would be selected. Still, the Phillies have a lot of players to protect, and since younger prospects like Crawford do not have to be protected this winter, it wouldn’t seem to make a whole lot of sense to waste a 40-man roster spot on them for a few at-bats in the big leagues in September.

So if not Crawford, who can you expect to see that might draw some excitement to Citizens Bank Park? The Phillies will certainly add catching at some point in September (and possibly sooner, if they’re able to trade Carlos Ruiz in the next week).

Jorge Alfaro, the top prospect the Phillies received in the Cole Hamels trade and the owner of the power bat and power arm, is already on the 40-man roster and could be up once Double-A Reading’s postseason run is over. Knapp, among the aforementioned prospects that has to be added to the 40-man this winter, is also an option. Alfaro has had a better season at Reading than Knapp has had in Allentown and it doesn’t seem likely the Phils would add two catchers when even one will struggle to get regular at-bats with Cameron Rupp on the roster.

Roman Quinn, like Alfaro, is on the 40-man roster already. Both Quinn and Williams could be worked into the big league outfield rotation for a start or two in the season’s final weeks once Reading and Lehigh Valley’s postseason runs conclude.

As with the well-traveled relievers (Garcia and Araujo), veterans Cody Asche and Darin Ruf are decent bets to return at some point, too, as both are on the 40-man roster and have increased their versatility in Allentown (Asche started his first professional game at first base this week).

Then again, the Phillies won’t be adding players just for the sake of adding them, either. While the incoming relievers are expected to ease the burden of the rest of the pitching staff, there may not be room for all of the position players on the 40-man roster, especially if they’re barely going to play.