On Friday, two days before he and his Eagles teammates leave for Minneapolis and Super Bowl LII, injured quarterback Carson Wentz spoke publicly for the first time since tearing his ACL back in Week 14 against the Rams.

The 25-year-old, who had moved on from crutches to a cane in recent weeks, was walking around the NovaCare Complex without the use of either, providing the visual evidence to back up what he would tell reporters a few hours later.

His message? Overwhelmingly positive – about his injury, his recovery, his team, and even his replacement – despite the fact that he also revealed his surgically-repaired left knee was actually worse off than doctors first realized.

So what does that mean in terms of a timetable for his return next season? Is there still a chance he's ready to go in Week 1?

"It's hard to talk about timetables, because they're always fluid – injuries are fluid and timetables adjust depending where you're at [in your rehab]," Wentz said, adding that in his conversations with trainers, he's been told that the additional LCL injury won't significantly alter the rehab process. "But I feel very confident. I truly believe – my goal is to be ready for Week 1. I'm going to push and do everything I can to be ready. And I'm very confident in that."

Wentz, who at one point many believed would be the one leading this Eagles team into the Super Bowl next Sunday, also admitted that at times it's been tough to watch his teammates play without him. Not because he's jealous of Nick Foles' success or anything, but because he misses playing.

"But then, I'm in it. Because I love these guys. I'm a part of this team just as much as anybody else. I get involved in the game, and that kind of all goes away. But, without a doubt, just as a human there's a part that just feels – yeah, it's tough.  It's tough to not be out there, but I love watching these guys. And I couldn't be happier for them." 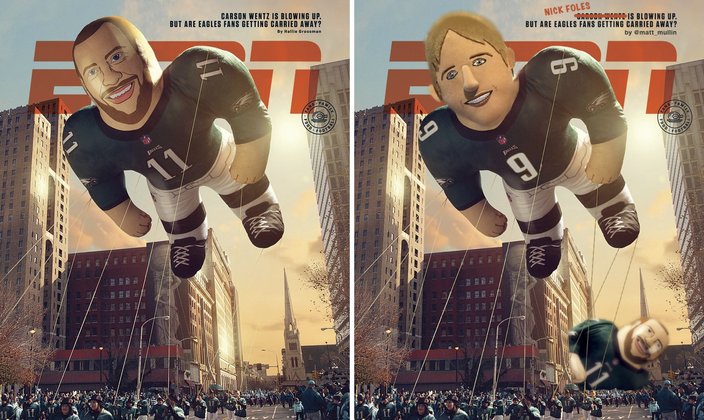 On the left is Carson Wentz's ESPN The Magazine cover. On the right is what that cover would look like now.

In the meantime, he's been trying to stay involved in any way he can, from the film room to the practice field and even on the sidelines during the games.

And his presence has helped, according to Foles.

"I think the big thing about Carson is him just being around, being and doing everything and working and rehabbing and doing everything he can and then being on the sidelines," Foles said last week. "He's a huge reason we're in this position. He's done such an amazing job in his two years in the NFL of continuing to create this atmosphere and obviously going out there making electric plays, but really just making everyone believe. That hasn't changed though he's injured. He's still around, and I love having him around."

Wentz, as one might expect, deflected when asked about the impact he's had in his role as an assistant quarterbacks coach of sorts. Instead, he opted to credit his replacement.

"I'm trying to do what I can. I'm not trying to overdo anything," Wentz said. "Coming in in the mornings with Nick [Foles] and Nate [Sudfeld] – I'm really trying to do what Nick and Nate did for me all season, just help them, be with them in the film room and everything, and talk to guys and say what I see as well. But Nick's done a great job; Nick's really taken that leadership role, so I'm just trying to support him as best I can."

Whatever he's been doing, it seems to be working.