Cold case of Celina Mays, missing South Jersey girl, to be featured on 'In Pursuit with John Walsh'

She had been weeks away from having a baby when she vanished in 1996. The show airs Sept. 14 on Investigation Discovery 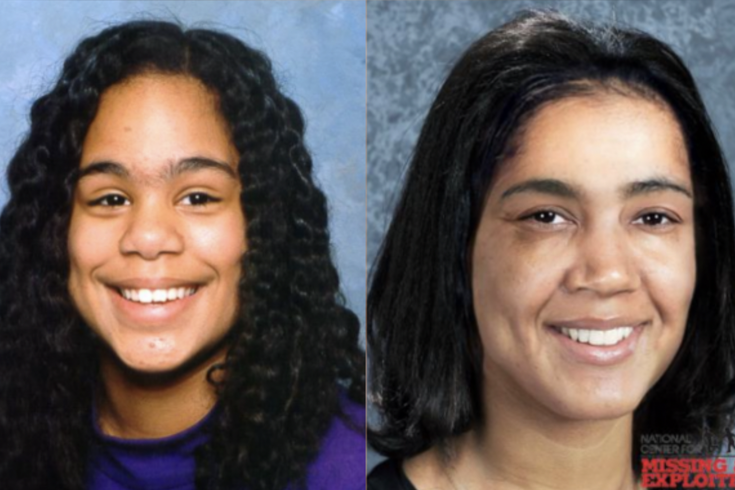 Celina Mays is pictured above on the left before she dissapeared from her home in Willingboro, New Jersey on Dec. 16, 1996. The image on the right is an age-progression photo created by the National Center for Missing and Exploited Children. Mays, who was 12 years old and pregnant when she vanished, would be in her late 30s today.

Celina Mays was 12 years old and pregnant when she disappeared from her home in Willingboro on a December morning in 1996.

Hours before she vanished, she had attended church and eaten ice cream with her family, seeming as normal as a child can just two weeks before she was due to give birth.

More than 25 years after her disappearance, investigators still aren't sure what happened to her – or whether she ever had her baby.

Next week, the cold case out of Burlington County will be featured on Wednesday's episode of "In Pursuit with John Walsh," the Investigation Discovery series hosted by the victims rights advocate and creator of "America's Most Wanted."

For years, little progress has been made in the search for Celina, but investigators hope that in the age of social media and advancements in age-progression photo technology will reignite interest the May case and bring it closer to a resolution.

Celina was 9 months pregnant when she disappeared, and authorities believe she had embraced the challenge of having a child at such a young age. Though there had been secrecy and doubts about the identity of the child's father – and fears that Celina would need a cesarean section – there was nothing to suggest that she would run away from home.

The only suspicious recollection from any witness of the night before Celina disappeared came from her step-mother, Evette Mays, who remembers the girl saying, "Thanks for everything," before she went to bed.

Willingboro Police have received more than 250 leads over the years, some of them more promising than others. The investigation has been bogged down by questions surrounding the Pentecostal church Celina and her family belonged to and the bitter relationship between the girl's paternal and maternal relatives.

Celina was born in Miami in 1984 to father C.J. Mays and mother Lynn Vitale. The family moved to Palymra, Burlington County in 1986 and Vitale died tragically after suffering an aneurysm in 1994. A custody battle ensued between Vitale's family and Celina's father, who had a criminal past in Florida, the Burlington County Times reported last year.

Celina's father ultimately won custody, proving that he had changed his life since moving to New Jersey and getting involved in the Gospel of Christ Ministry in Mount Holly, less than 10 miles from the family's new home in Willingboro. Members of the Mays family worked at the church. The children were homeschooled there.

But concerns about pastor Cirita Smith – C.J. Mays' sister – led to the revocation of the church's membership in the Christ Gospel Ministries International. The Washington Street church is reportedly defunct these days, but the family's connections with the ministry have remained an area of suspicion in the investigation, in part because faith was a barrier to Celina getting an abortion, despite her age.

C.J. Mays, who died in 2019, had been ruled out as the father of the baby after his doctor confirmed to police that he had gotten a vasectomy years before his daughter's pregnancy. He told investigators that before Celina disappeared, she had mentioned that the father of her child was a 16-year-old boy who didn't belong to the church, and that she didn't want his identity to be discovered by a blood test.

Over the years, members of Celina's maternal relatives have suspected that the Mays family had been involved in the girl's disappearance or was hiding her. The Mays family has countered that they believed Celina was taken back to Florida or possibly Michigan, by her mother's family.

Celina also comes from a biracial background – her father was Black and her mother was white – which has sometimes caused friction over the way the case has been framed.

Early on in the investigation, authorities were denied a warrant to search the church and the Mays' home, since the family had been considered potential victims of biased questioning by police. The family no longer lives at the home on Crestview Drive in Willingboro.

The closest thing to a lead over the years was a report of a sighting of a girl who looked like Celina – and wasn't pregnant – at a restaurant in Howell in January 1997. A little more than a month had passed since Celina's disappearance, but police later confirmed the girl was someone else.

The investigation has changed hands among detectives over the years, but authorities continue to seek closure. They're searching for Celina – presuming she may still be alive, she'd be 37 years old – and the child who would now be 25.

The episode of "In Pursuit with John Walsh" airs at 9 p.m. on Sept. 14 on the Investigation Discovery. The show can also be streamed on the Discovery+ app.

Anyone with information on Celina’s whereabouts can call or text the show at (833)-3-PURSUE, or submit an anonymous tip online.