The NFL season is here, and so is the stupidity that comes with it 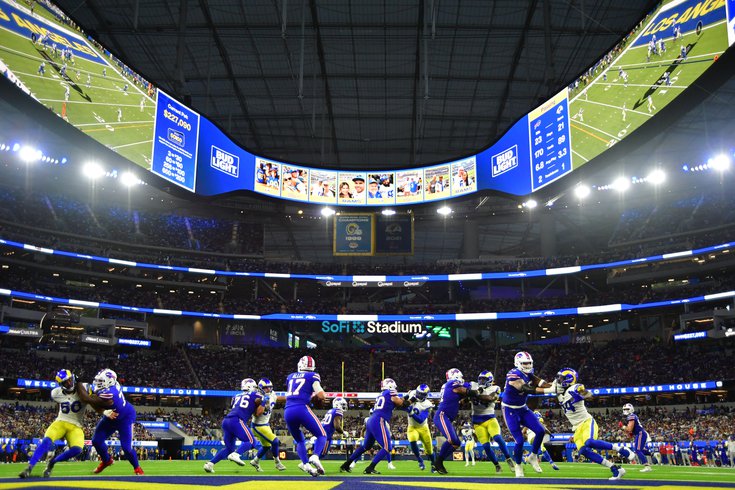 After Thursday night's NFL season opener between the Buffalo Bills and Los Angeles Rams at SoFi Stadium, fans of the two teams got in a fight outside the stadium. Former Eagles and Bills running back LeSean McCoy was there to see it.

The Buffalo Bills rang in the NFL season with an impressive 31-10 win over the Los Angeles Rams in Southern California on Thursday night, putting the defending Super Bowl champs and the rest of the league on notice. Josh Allen and Stefon Diggs delivered huge fantasy football performances. Fall is here. Football is back.

Everything went swimmingly – except the egress from SoFi Stadium, where a few fans engaged in a pathetic fight in the middle of the roadway.

A video of the fight shared on Twitter by former Eagle Emmanuel Acho shows a Bills fan in a Diggs jersey throwing a punch at a Rams fan in a Cooper Kupp jersey. Then another Rams fan takes on the Bills fan and the fight devolves into a bumbling mess before a security guard breaks it up.

Suddenly, the video pans to LeSean McCoy, the former Eagles and Bills great (and Chiefs/Buccaneers twilight ring man), who remarks, "They can't fight."

Uh oh, now fights are breaking out in the middle of the street between Rams and Bills fans.. pic.twitter.com/LhoVhcSi7B

Out of all the fan fight videos that have circulated over the years, this has to be the most unusual. What are the odds that a former superstar player is going to be standing outside the stadium watching these grown children flail themselves at each other in the name of everything that sucks about sports? Even laughing with McCoy here is a bit nauseating considering his checkered past, which most Eagles fans seem inclined to let slide, given how common it is for pro athletes to get mixed up in bad situations.

Let's step back for a minute.

Have you ever tried to defend being an NFL fan to a person who doesn't get it? Maybe you've mentioned the camaraderie of a larger community, the generational history of football and the spectacle of athletic excellence on display for millions to see?

Then the other person points out things like traumatic brain injuries, the racist team name people condoned for decades in Washington, the slew of criminal charges and unsavory allegations against players, the cheating scandals, and the tendency of drunk, moronic fans to fight each other or blow their money on gambling.

At that point, you're left talking about compartmentalizing and having a holistic view of things in order to avoid being prickly. You know the other person is never going to see it your way, and frankly, you don't want to see the world their way. It feels a bit self-righteous to isolate the presence of uncivil human behavior in and around the low-hanging fruit of football when it also corrupts pretty much everything else, too.

Football makes you happy, and you're not alone! It doesn't absolve the game's blemishes, but one of the great things about sports is that they magnify and make transparent the emotions of competition, which mostly need to be muted or camouflaged to navigate so many other areas of life.

Having said all of that, it's beyond annoying to see idiot fans fighting each other year after year, showing zero self-discipline and giving a bad name to the entertaining outlet of sports. It's a good thing these guys in Englewood didn't know how to fight, because at least it appears no one was badly hurt in the scrap. It doesn't always go that way.