Adding to a tumultuous time in his life, the 11-term U.S. representative defeated by state Rep. Dwight Evans on Tuesday 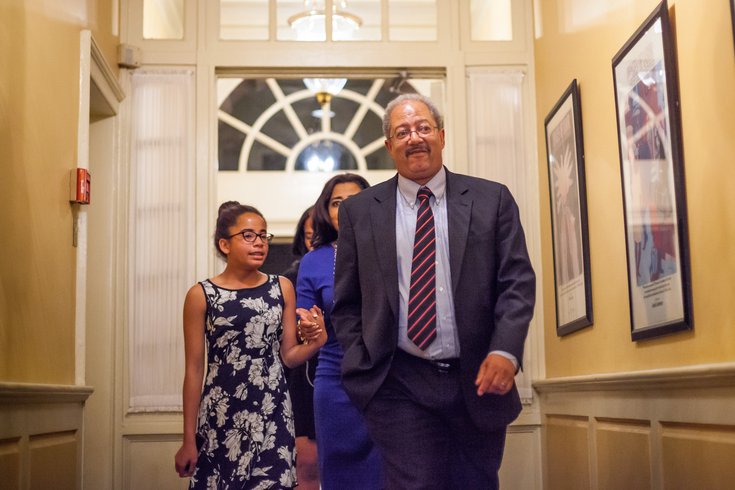 Suffice it to say, these are challenging times for U.S. Rep. Chaka Fattah, the 11-term incumbent in the 2nd Congressional District.

Last July, he and four associates were charged in connection with a 29-count racketeering indictment. He swears he’ll beat the rap – if it even goes to court – but the trial is scheduled to start in early May.

Seven months later, his namesake son was sentenced to five years in federal prison after a conviction on bank and tax fraud. Just three weeks later, the congressman’s wife, Renee Chenault-Fattah left her high-profile anchor job at NBC10, news that she announced via Facebook post.

But none of that seemed to weigh on the husband and wife as they walked across School House Lane and toward a William Penn Charter School campus building to cast two votes in favor of the re-election effort just after 7:15 a.m. Tuesday.

“It’s a great day,” he said to a passing voter outside.

If he thought the tide would immediately turn in his favor, he was wrong.

The problem with that? Turns out that a White House deputy press secretary said Obama hadn’t endorsed any candidate in the four-person race, and that permission to use his voice hadn’t been granted. (Clinton, of course, was too busy with his wife’s Pennsylvania primary to weigh in on the use of statements he made some 18 years ago.)

By nightfall, after heavy rains, all that was left to decide was the great unknown: With all that hanging over his head, would Fattah find a way to win a primary over state Rep. Dwight Evans, Dan Muroff and Brian Gordon?

And that’s what brought people to 1319 Locust St., home of National Union of Hospital and Health Care Employees District 1199C, where smooth jazz blasted through the speakers, pretzels, waters and hoagie trays sat atop tables and reporters outnumbered attendees around the time polls closed in the 827 precincts across the county-crossing district.

The crowd’s eyes were on their phones and laptops as the minutes drifted away, with Fattah’s early lead getting whittled down to margin-of-error style numbers.

By 9:30 p.m., Evans had surpassed him in the Philadelphia results and 20 minutes later, he had a 2.9 percent lead over the incumbent districtwide.

When the clock struck 10, Evans’ lead in Philadelphia had reached seven percent with nearly 87 percent of the vote counted.

The mood in the sparsely occupied room – there were about a dozen non-reporters upstairs at the union hall – looked to be one of resignation, with no sign of Fattah, whose decades in power were seemingly on life support at the hands of his frenemy from Northwest Philadelphia. Even the volume of the music playing through the room’s speakers dropped.

At 10:04 p.m., Fattah entered the room to a round of applause from the dozen or so people in attendance.

Over the course of a 10-minute speech, he conceded that the voters of the district didn’t provide him enough votes to return to Congress for a 12th term. 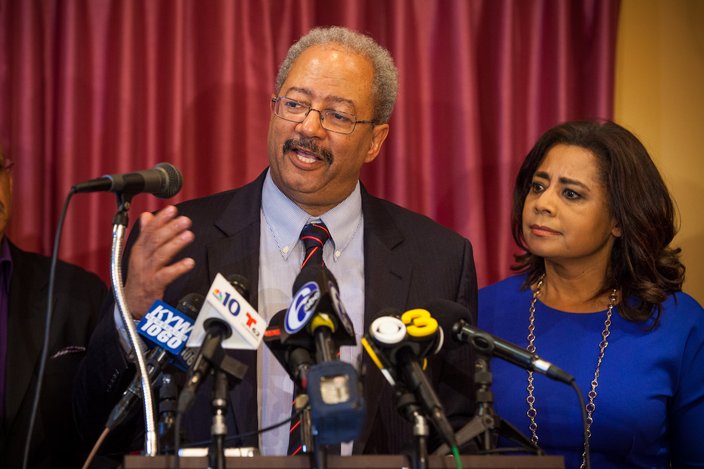 In conceding the Democratic primary, outgoing U.S. Rep. Chaka Fattah, standing with his family and wife, Renee Chenault-Fattah, thanked supporters, railed against what he considered unfair treatment from the media, celebrated his legacy and left without taking questions.

With his wife at his side, eyes tearing up, he thanked his supporters and staff “who worked hard under difficult circumstances,” railed against the media’s penchant for fixating on his travails rather than his accomplishments and wished Evans well

“It appears that the numbers will not add up to me returning to Congress,” he said, citing the difficulties of running for office with such dark clouds hovering over him. “Just because we didn’t prevail in this election doesn’t mean that the issues we fought for [don’t deserve the same amount of attention]. There comes a time when the baton is wrested from our hands. … Thank you and good night.”

Then, he left the stage, declining to take further questions from the assembled media, walking down the steps with a group of supporters and out of the building where an unfamiliar life, and new challenges, awaited.