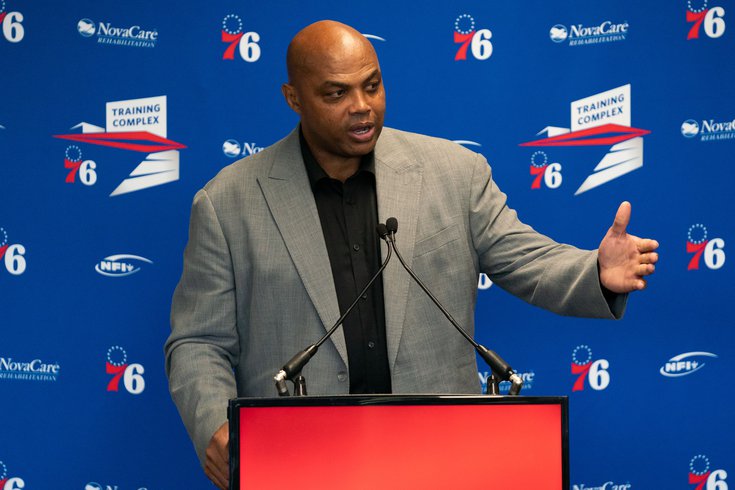 Charles Barkley was one of several NBA stars who appeared alongside Michael Jordan in 'Space Jam' in 1996.

When Charles Barkley comes to mind, fans likely point to either his Hall of Fame basketball career or his incredible run as a TV analyst for Turner Sports.

Not as many are likely to reference his appearance in the hit 1996 film "Space Jam" as where they are most familiar with Sir Charles.

But that was how Ilya Hoffman, Barkley's newly-minted son-in-law, knew of the Basketball Hall of Famer and legendary commentator.

When the 34-year-old Hoffman was introduced to Barkley's only child, 31-year-old Christiana, in 2016, he was more impressed with the 11-time NBA All-Star's daughter than he was with the former league MVP, Hoffman told the New York Times.

After someone mentioned to him that the woman was Barkley's daughter, Hoffman's first thought was of her father's appearance alongside a cast of other NBA stars in "Space Jam."

“I said, ‘Oh, you mean the guy from ‘Space Jam’? That’s where I knew him from," Hoffman admitted. "Some people might have been like, ‘Oh my god, Charles Barkley.’ To me it was like, ‘Look at this amazing girl.'”

In the film, Barkley is one of several players who loses his talent to an alien species, leaving it up to Michael Jordan and the Looney Tunes to get their skills back in a basketball game against the Monstars.

In defense of Hoffman, "Space Jam" was the first time I ever saw Barkley too. I wasn't alive yet when he starred with the Philadelphia 76ers for eight years, and I was too young to remember his run with the Phoenix Suns. But "Space Jam" wouldn't be my first point of reference when talking about Barkley today.

But unlike myself, Hoffman is not a sports guy, which he cited as his reasoning for being unfamiliar with Sir Charles.

“I walked into their house and I was like, ‘That is a huge guy,’” Hoffman said.

“When you go out to dinner with Charles, people can be pretty rude like, ‘Hey, Charles, can I take a picture with you?,'" Hoffman recalled. "But every single time he puts a smile on his face. He’s the most generous person. He never gets annoyed.”

During a visit to Scottsdale over Christmas in 2019, Hoffman asked the Barkley family if he could marry their daughter. Both Charles and his wife Maureen approved, and the couple got engaged last May.

The experience of being asked by Hoffman to marry his daughter was "really emotional" and "nerve-wracking," Barkley told Jimmy Kimmel in an appearance on "Jimmy Kimmel Live" earlier this month.

"I love [Hoffman's] family," Barkley said to Kimmel. "They're amazing people. They've been living in Long Island [New York] for a long time, and it's going to be a welcome addition to my family."

The wedding took place on March 6 in Scottsdale. While the ceremony necessitated Barkley to miss out on NBA All-Star Weekend in Atlanta this year, the Hall of Famer had no regrets.

“It was the best weekend of my life,” Barkley said to the New York Times.