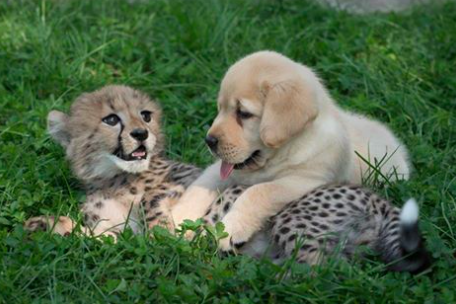 It's been a trying year for banner animal news. Harambe's death looms large across a nation that cleaves to these diversions for a break from mankind's barbarianism. We need some more cheetah cubs making friends with slack-tongued yellow lab puppies.

Last week, the Columbus Zoo and Aquarium brought us the story of 10-week-old Emmett, the sickly cheetah cub who needed some friendship to strengthen his social skills after a bout of pneumonia. Emmett chose 7-week old Cullen to hang out with and learn from a dog how not to be a scaredy cat.

According to the zoo, Emmett will be traveling with Cullen and Jungle Jack Hanna's team to be an ambassador to his wild brethren. His story has been shared faster than he'd be running around in the Serengeti, a true testament to the powerful grip animal kinship has on the human heart.

Check out the video below for a closer look at the pair's relationship.

As it turns out, the cheetah-dog bond is a relatively fruitful one for zookeepers. This story has unfolded several times in recent years. More clips below for your enjoyment.