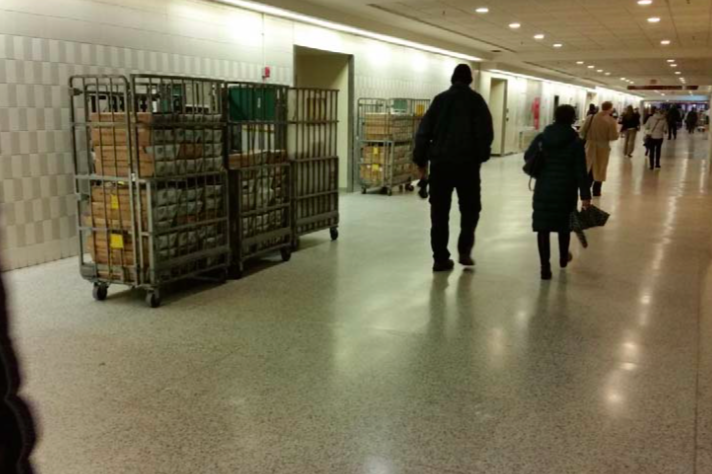 Processed and metered mail awaits pickup by the US Postal Service. Pedestrian traffic passes through area, but no mail center personnel are in sight.

A new report from Philadelphia City Controller Alan Butkovitz, released as part of an ongoing investigation of systemic mismanagement in the city's Mail Distribution Center, says that improperly sorted mail and excessive overtime pay have cost Philadelphia more than $1.5 million.

In February, the Controller's Office published findings that showed widespread delays in the delivery of time-sensitive documents, such as water bills and traffic court subpoenas, as well excess postage costs stemming from a failure to apply lower rates.

The Mail Distribution Center, operated by the Philadelphia Department of Revenue, has been the subject of a wide-ranging operations probe of costly practices and lax security measures. In the latest report, released Wednesday, the Controller's Office details the consequences of the Revenue Department's failure to provide written policies and procedures for the Mail Center.

"This contributed to a working environment that had poor oversight and negligible management attention," the report states.

Investigators found that Mail Center employees were granted "virtually unlimited overtime," resulting in $465,500 in costs for just a handful of employees over a three-year period. Despite a 27 percent increase in overtime costs, there was an 11 percent decrease in the amount of mail processed during that time period. The chart below shows, for example, overtime pay received by six employees from July 1, 2015 to January 31, 2016.

Breakdown of overtime pay at Philadelphia's Mail Distribution Center from July 1, 2015 to January 31, 2016.

The report also found that there was "minimal to non-existent" security procedures at the Mail Center. From unlocked doors to carts of stamped mail left unattended in public walkways, Mail Center management failed to protect the property and confidentiality of Philadelphia residents and those who sent them mail.

The City Controller's Office provided a series of recommendations to the Revenue Department to address the root issues contributing to mismanagement. They include developing written Mail Center policies and procedures, establishing a work flow process with specific timelines, and creating a process to track, monitor and report all mail transits. Tighter security procedures and staffing evaluations to minimize overtime were also recommended.

The Department of Revenue issued a detailed response enclosed in the report that outlines various plans to implement management oversight, accountability for outgoing mail, cost containment, and new security procedures. The response notes that overtime has been reduced by 23 percent from February 2016 to March 2016 as a result of one permanent and three temporary hires. The department has received approval for six additional permanent positions and notes that Mayor Kenney's budget proposal calls for funding to install security cameras and institute other security measures at the Mail Center.

The full report from the City Controller's Office can be read here.