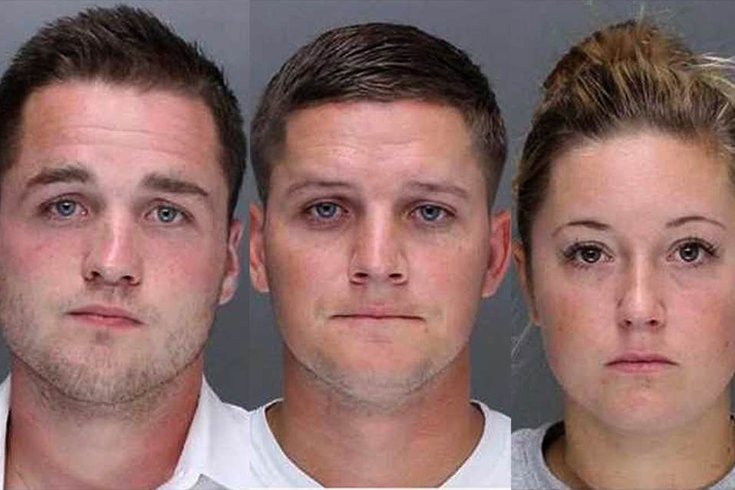 Two of three co-defendants charged in the brutal beating of two gay men in September 2014 pleaded guilty on Thursday.

As part of their plea deal with prosecutors, the two Bucks County men who pleaded guilty, Philip Williams, 24, of Warminster, and Kevin Harrigan, 26, of Warrington, are banned from entering Center City for the duration of their probation and will be required to perform community service at LGBT organizations.

Williams pleaded guilty to charges of aggravated assault and conspiracy, and was sentenced to serve five years of probation and perform 200 hours of LGBT-related community service.

Harrigan pleaded to charges of simple assault and conspiracy and received three years of probation and 200 hours of LGBT-related community service.

Both men are barred from visiting the area bounded by Washington and Girard Avenues, river to river, during their probationary periods.

The third co-defendant in the case, Kathryn Knott, 24, of Upper Southampton, did not accept any plea deal and is expected to go to trial on charges of aggravated assault, simple assault, conspiracy and related offenses.

In court, prosecutor Michael Barry recalled the events that lead to the charges against the three co-defendants. On that evening, he said, the two victims, Zachary Hesse and Andrew Haught, were walking near 16th and Chancellor streets, not far from Rittenhouse Square, when they were confronted by a group of people.

At that point, Harrigan yelled "What is that, your f***ing boyfriend?" Barry said.

After Hesse responded that Haught was, in fact, his boyfriend, Barry said that Harrigan asked "So, you're a dirty f****t?" and pushed Hesse.

Hesse pushed back and the man began an altercation that didn't end until Hesse's boyfriend was laying in the street, "semi-conscious and bleeding profusely from the face," Barry said.

Barry said that during the tussle Knott swung at Hesse, but missed, while screaming homophobic slurs. During the incident, Haught and Hesse were separated and Haught grappled with Williams until he was knocked to the ground.

"Williams hit him in the face when Haught was on the ground," Barry said.

Haught was hospitalized with a broken orbital bone and a broken jaw, which was wired shut for eight weeks, the prosecutor said. While the victims did not speak at the hearing, Barry spoke on their behalf, saying they wanted the incident behind them.

"They thought they were safe in Center City," said Barry. "One of the reasons this struck such a chord is because Center City is supposed to be a place where this doesn't happen."

In taking a moment to address the court, Williams and Harrigan each apologized to their victims.

"I'm very sorry for what happened that night," said Williams, noting that he only got involved in the incident when a girl in his group "seemed in jeopardy."

Harrigan, for his part, didn't recant his homophobic slurs, but said he was sorry for his actions that night.

"What happened that night is not what any of us wanted," he said.

Knott's trial date has not yet been determined, though she will have a scheduling hearing on Oct. 30. Asked why Knott did not accept the plea deal, her lawyer, Louis Busico, said she never touched the victims.

"There was no contact between Kathryn and the complaining witness," he said.

Busico said the only violence that night occurred between the "men in the groups."