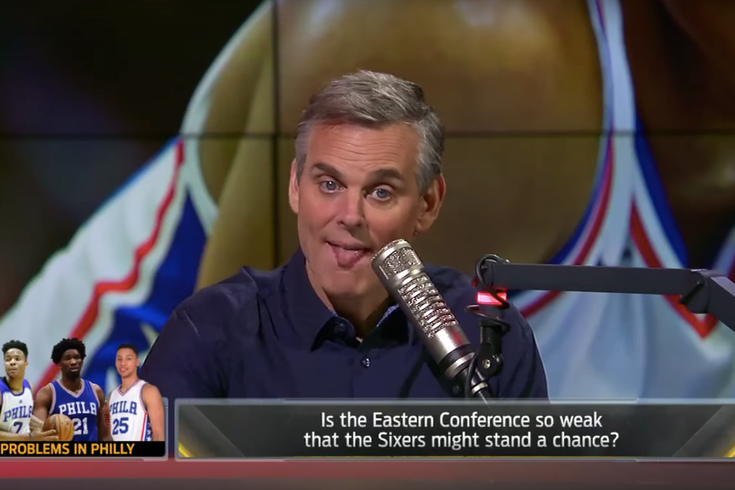 The Herd with Colin Cowherd/YouTube

Colin Cowherd, aka the loud sports baby man, aka The Cow Man.

For all the crap Eagles fans (justifiably) gave Mike Lombardi for calling Doug Pederson the least qualified coach ever, you have to give him credit. At the end of the day, he ate crow.

Lombardi, a former NFL executive who now gives commentary for The Ringer, was lambasted relentlessly after his preseason hot take looked worse and worse as Pederson led the Birds to a 13-3 record and a Super Bowl win. He was a bit reluctant to give in at first, but after Pederson hoisted the (Vince) Lombardi Trophy and Jason Kelce called him out, Lombardi sucked it up and took the L. He said Kelce gave him "what he deserved" and tipped his cap.

MORE SIXERS: The Sixers laid the absolute smackdown on tanking Grizzlies, as good teams do  |  Sixers' guard Ben Simmons is doing things few rookie players ever have  |  Report: Sixers one of just four teams LeBron James will consider this summer

Well, that will not be the case for loud, sports baby-man Colin Cowherd. Cowherd, who is very smart — unlike us, who are all very dumb — said before the season that the Sixers will NOT win 40 games this year. Using his off-putting, shout-talk monotone, he asserted his guarantee into his big boy sports microphone.

Cowherd was so confident that he took a bet to wear a Sixers jersey on air and admit he was wrong if the Sixers did win 40.

Somehow, some way, despite the Cow Man Guarantee, the miserable Sixers have won 40 games this year, notching a blowout victory over the Memphis Grizzlies on Wednesday night. But that is only because the refs are IN THE POCKET OF THE SIXERS...

I guess the NBA has decided they want the Sixers to win tonight. Whatever.

...never mind that Philadelphia has 12 games left on the schedule against teams with a combined winning percentage of .421, meaning they almost certainly would have hit the 40 mark anyway.

Ha, but actually, THE COW isn't really mad at all. Nah, he doesn't care. Look at him, trolling Sixers fans, because he is definitely not mad.

Looking everywhere in LA for Sixers jersey. Can’t find one. So frustrating. Really wanted to pay off the bet. Well, maybe next time.

Time for loud, sports baby-man's intern to throw together a Photoshop.

Congrats on 40 wins. Next up, LeBron #TTP pic.twitter.com/vVk3NqeHay

You see, Cow Man is absolutely not mad online about the whole thing because — WELL ACTUALLY I MEAN THIS TEAM ISN'T SHAQ, KOBE AND LEBRON SO WHAT HAVE THEY REALLY DONE.

But seriously, the big britches sports sheriff is in no way mad and is actually really laughing about the whole thing and not mad.

Joking aside, Cowherd is a butt whose takes often cross the line from being "hot" to simply being in bad taste. Take it away, Joel.