Cosby case looks likes circus from outside but lacks excitement 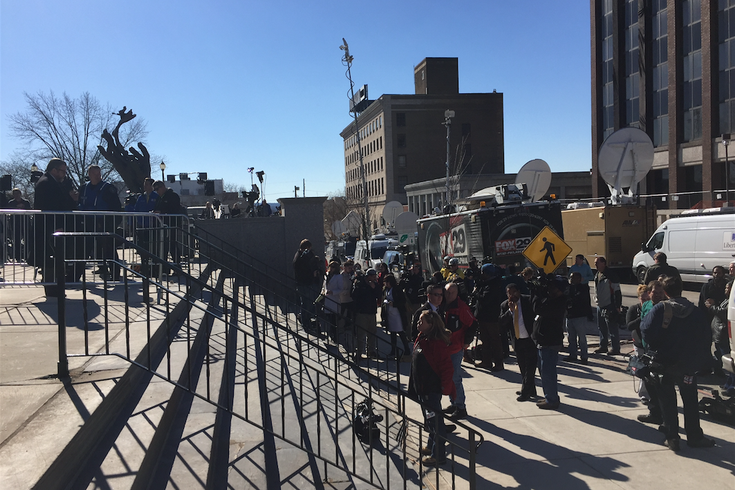 Media members gathered outside the Montgomery County Courthouse in Norristown were left waiting for something to happen most of Tuesday as Bill Cosby was inside for a hearing related to the criminal charges against him.

It took Bill Cosby about a minute to walk into the Montgomery County Courthouse for Tuesday's hearing during which he is seeking to have felony aggravated indecent assault charges against him thrown out. That was around 8:50 a.m.

By the time lunch break rolled around, rubberneckers had mixed in with the droves of local and national reporters camped out along the courthouse’s Swede Street entrance to be part of the festivities.

With satellite truck antennae reaching toward the sky and the perpetual hum of generators filling the airwaves, nobody could miss the fact that the media circus came to Norristown.

But what became evident is the fact that that circus showcases a whole lot of sitting around while waiting for something – anything – to happen.

Each time the door opened, cameras were on the ready, but each time, no Bill Cosby. When the courtroom sketch artist walked out, several television cameras headed over to a vacant podium, on which drawings of former Montgomery County District Attorney Bruce Castor testifying were displayed.

Electrical cords snaked through puddles of melted snow near a monument to those killed on 9-11. Time-burning small talk was made. Places to grab lunch were bandied about.

Hours upon hours upon hours passed. The boring realities of the allegedly high-profile assignment set in for those assembled outside, only getting updates on what was happening inside when reporters who got assigned seating came outside.

It’s in these moments when mediocre moments become momentous.

Or the 40-something redhead telling anybody who’d listen that she has ankle ink that says “Bill,” then explaining that it’s for her “daddy,” not Cosby, but that it’d be OK if it was a Bill Cosby tattoo upon deeper reflection.

Or the two 20-somethings taking selfies near the media horde and laughing hysterically when they realized these would be good shots to represent “#BillCosby.”

Or the man who walked by the car waiting behind a sheriff’s deputy for the would-be defendant who asked, “All this for Uncle Bill? Damn.”

And so it went on.

There was the “What’s the hubbub all about?” inquiry at 2 p.m.

At half an hour later, a gentleman approached and said, “Yo, let me ask you something.”

“Don’t you have anything better to do than wait out here for Bill Cosby?”

Not really. How else would we hear people lean out car windows yelling “Puddin' Pops”?

At 3:30 p.m., a tipster who didn’t previously know Cosby was inside would tell a few members of the press that “Yo, he’s leaving out the back door right now. Yo. I’m tellin’ you.”

Nobody bit. Cosby was still inside. The story on the street was that the case would either go late into the evening or be continued into Wednesday.

The breaking point arrived at 4 p.m. when a sweatpants-clad gentleman crossed Airy Street with a very important statement: