After decades in the biz, Cakes by Kharis sets up shop 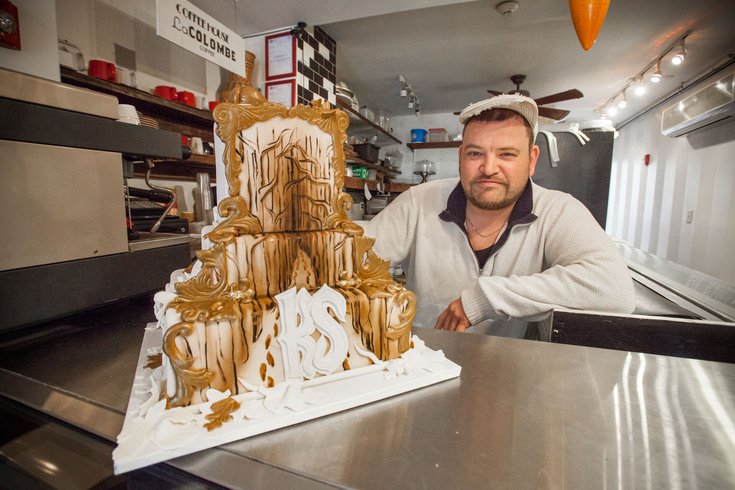 Kharis Schneider poses by an airbrushed creation at his shop, Cakes by Kharis, on Girard Ave.

Kharis Schneider, owner of Cakes by Kharis, transforms ideas into edible art. Over 25 years on the specialty cake circuit in Philadelphia and New Jersey, he's won a loyal following of customers. His talent’s in the wrist; a penchant for airbrushing and sculpture brings life to chunks of batter. And, for the first time, the baker has his own storefront address at 113 W. Girard Ave. in Fishtown.
Rolling out dough behind the counter at his bakery-café, Schneider, 38, is partially hidden from view. Giant canvases of swords-and-damsel scenes cover one wall, another side of the artist displayed for public viewing. 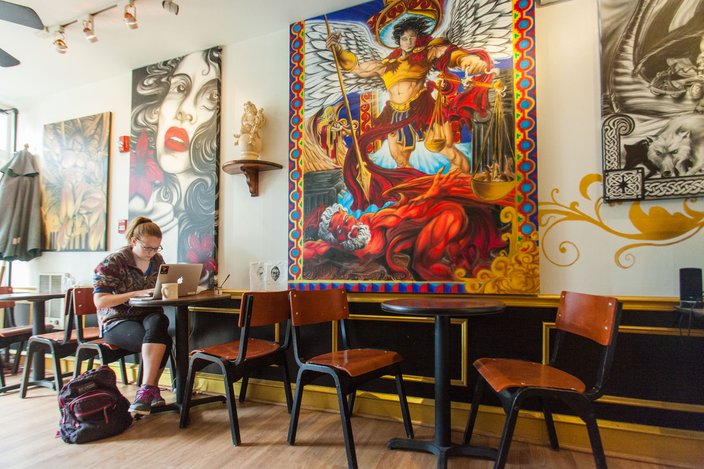 Schneider's artwork adorns the walls of Cakes by Kharis cafe and bakery. Thom Carroll/PhillyVoice
For years, he’s toiled in obscurity, making cakes in the kitchens of corporate ballrooms. Before opening his shop in May 2014, Schneider worked at Tendenza, Cescaphe event group’s Northern Liberties location, for eight years, building extravagant wedding cakes he would sell to the company and also custom orders to his website. He never met the brides, and rarely met his clients.
When Cescaphe proposed opening a retail location with him, Schneider agreed. But he soon balked at the notion that someone else – a “fancy person” to run the baking-equivalent of front of house – would call the shots.
“I wanted to do it my way like I've always been doing it,” Schneider told PhillyVoice.com. Soon after, he jumped ship, and took a chance on opening a place of his own. 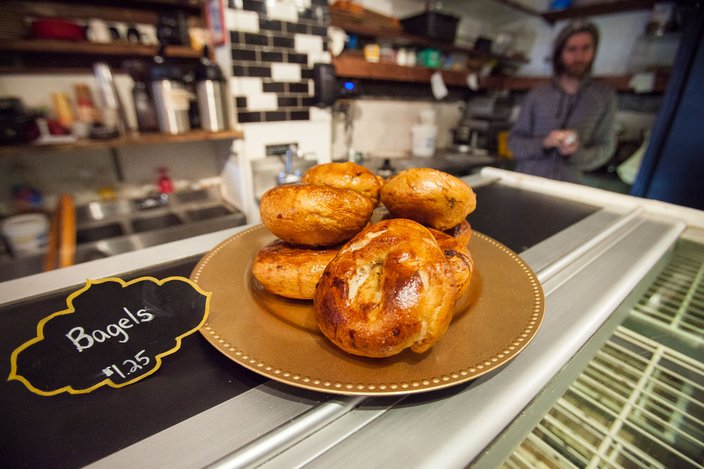 Bagels baked in-house by Josh, Schneider's sole employee. Thom Carroll/PhillyVoice
It isn’t the first time Schneider has gone rogue. From his early days making 50 cakes a week at Classic Cake Company, Schneider worked his way up to co-owner of a bakery at Germantown Ave. and Lehigh Street. But when that position ended due to a dispute with the building's owner over the lease, working at Cescaphe seemed like the logical move.
Today, business in the café is slow, but familiar names still come through the door.
One day at the shop, a customer named Paul came in to shake his hand. Schneider made his daughter’s wedding cake, then a baby shower cake, followed by a birthday cake, and, most recently, another baby shower cake. Nearly five years and two human beings after they started doing business, the baker finally met the man.
Behind an invisible curtain, Schneider works for public figures whose special occasion he customizes to their liking, or even their image: “I did the owner of Aramark’s cake, and they’d never know it,” Schenider said. A hospital in Doylestown requested an 8-foot cake exact replica of the building to feed 1,000. It cost over $4,000. For cakes of this ilk, Schneider has to prep tiny pieces at least two or three days in advance, and use water to attach delicate fondant flourishes on location. 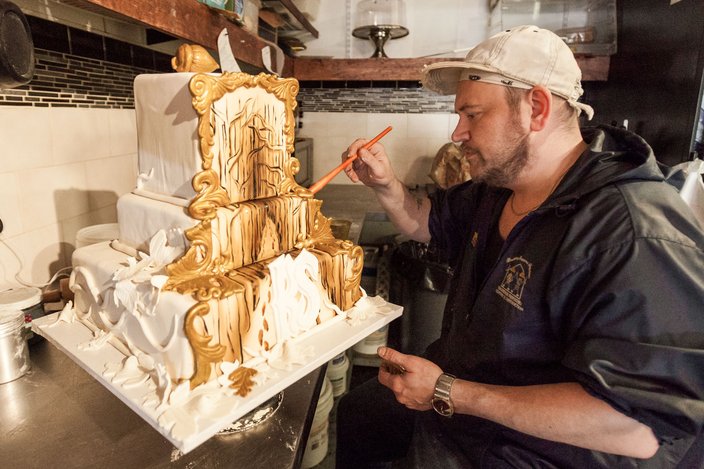 The baker puts finishing touches on a three-tiered wedding cake. Thom Carroll/PhillyVoice
Like a proud father, Schneider keeps pictures – 2,512, to be exact – of his cakes on his phone. Each one is unique. Yet they all exhibit an extraordinary skill that belies his average Joe demeanor. Cakes are priced per person, with buttercream starting at $3 a head and fondant cakes – the mother load of sugary spectacle – starting at $4.
Go one layer deeper, and flavors abound: While pound cake holds up best for fondant cakes, there’s also shortcake, carrot cake, Nutella, Italian rum, pink lemonade, lemoncello, canolli cake, chocolate mousse, chocolate banana cream, red velvet, and even La Colombe cake (chocolate-and-vanilla cake soaked in La Colombe simple syrup, for the coffee Schneider serves). 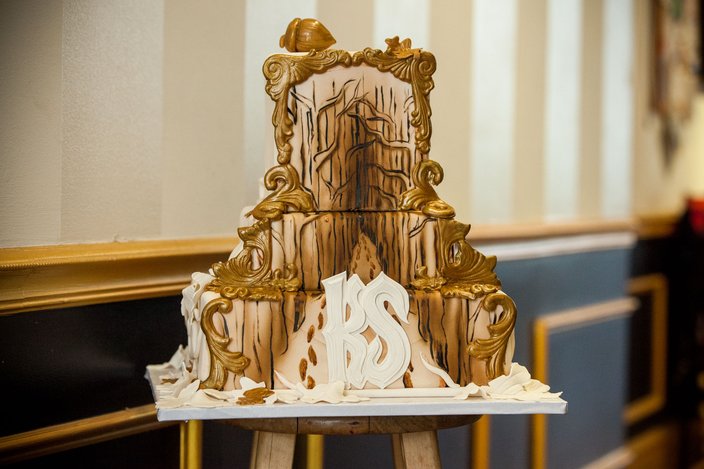 A finished monogrammed cake. Thom Carroll/PhillyVoice
But even an artist has his creative limits. Schneider declined a request to add chocolate-covered bacon roses on a cake, saying, “If you want bacon on your cake, you can do it yourself.”
Creating a moment of a lifetime takes more than just operating on a whim. It takes more than an educated palate. Fundamentally, it takes great imagination.
“There’s a lot of people that want in. It’s easy to teach, really.” Schneider said. “But when you want something free-styled … if they want you to create their thing, you have to have vision or something.”