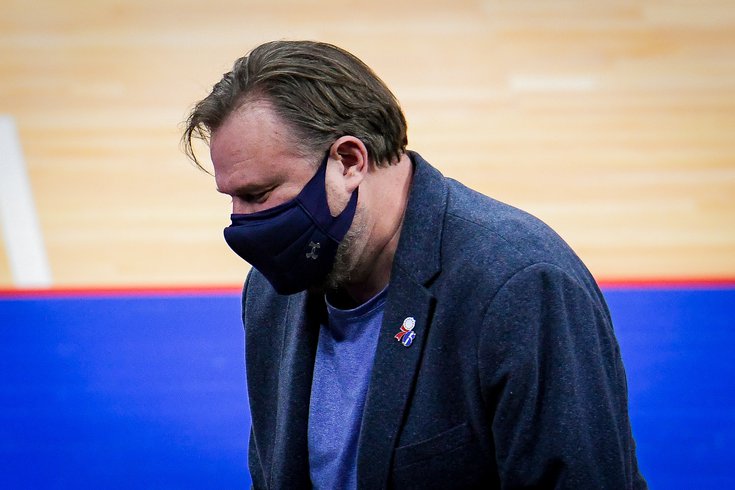 Weeks away from the February 10th trade deadline, the Sixers remain the most interesting trade candidate in the league, the team with the highest-value player currently available and in possession of an MVP candidate who could use a co-star. An enviable position in many ways, Daryl Morey and Co. are nonetheless trying to figure out where to go from here, as he told Mike Missanelli during an interview on 97.5 The Fanatic on Thursday afternoon.

Morey, who has never been hesitant to gush about the value Joel Embiid brings to the table, spent much of his interview with Missanelli showing his understanding for how the fanbase feels right now. Embiid is in the midst of the best stretch of his career, carrying Philadelphia to victories and raising the bar on a near-nightly basis, and many watch these games thinking the franchise owes him a greater chance at winning a title. Their front office leader doesn't seem to disagree.

"It has happened that someone playing as well as Embiid has won the title, so I do absolutely believe that this team, even without any changes has a chance," Morey said. "It's not as good a chance as any of us want. We want to improve that chance, we want to improve both every day in practice but also in my job, figuring out how to maybe add to the team in a way that really improves what's happening around Joel and Tobias and our other great players."

"There's a lot of frustrated teams out there, I would put us in the frustrated camp in that, we don't have our whole team. We do have a big chunk of our pretty constrained salary that we can pay the players not playing. That's very frustrating...and then there's teams that are frustrated because they're losing or not quite as good as they thought they would be, and that's creating a lot of chatter."

Embiid's play over the last month and a half has been so good, in fact, that Morey hinted at the idea that Philadelphia's trade pool could possibly expand heading into the deadline, rather than continuing to focus on a small group of high-end stars that are hard to pry away from another team. While Morey declined to get into any specifics — I doubt he wants to pick up any more tampering fines than he has managed to this point in his Sixers tenure — he did put a number on the table.

"I think with how great Joel is, our line has moved down a little bit. Because Joel has lifted us to contention by his sheer will of greatness this year, that does the number of deals we would do more likely. It's more likely that we can find ones that get us into the top few contention because of how great Joel is playing. So we are sitting right now at a better chance of a trade that actually helps Joel and the Sixers," Morey said. "[Before], we absolutely need to get an impact player, but there's an impact player that has to be in the top 30 of the league. Because Joel is playing amazing and has lifted us into probably five percent plus title odds just on his play, now we might be able to do it with a top-40 player who's a great fit. Or we could do it where we do a trade, it helps the team, it's a better fit, and maybe our future opportunities are still open because we get some draft picks as part of it."

"So it helps the odds enough this year and we maybe have a draft pick or a young player who can help us into the future, who might develop like if we got a player a caliber of a Maxey coming back. We might be able to say okay, we got a really solid player, maybe not in the top 30 but he's a little bit below that, plus a solid young player who over Joel's prime which we're sitting in might develop into that."

Reading between the lines — and I want to be clear this is speculation, not reporting — this all but sounds like a direct challenge to Sacramento to build a good enough deal involving Tyrese Haliburton to get this done. As we have noted many times over, Haliburton is good, young, on a team-friendly deal, and fits relatively cleanly alongside what the Sixers already have in place. Whether he's top-40 good is another story, and I still think the Sixers would be looking for more than that in a deal involving Sacramento, as they've hinted as much when privately discussing the merits of a deal with Sacramento. A three-teamer with the Kings feels almost necessary based on Philly's view of DeAaron Fox, who Shams Charania reported has been given assurances by the Kings hours before they lost to the woeful Pistons.

(I also have the Kings on the brain with how prominent they have been in the rumor mill lately, so factor that into the equation as well. Different people will hear that differently.)

Anyway, the "who" part of this discussion is not as important as Morey's overall view of the situation right now. Perhaps he truly believes that above quote and is willing to make a deal sooner than later and for a price below what we have heard through the grapevine since July. But it's equally likely he knows putting that on the record could spark another wave of discussions regarding Simmons and make Morey's a more sympathetic figure in the eyes of the fanbase. To the public, now he is not the hard-charging executive holding out for deals he can't possibly get, he's a guy who sees Embiid like all of you and is open to various opportunities in order to help the big guy out.

To that end, Missanelli continued to push Morey on the likelihood of a deal happening before the deadline, a subject that has been speculated and reported on constantly over the last month, with most offering their best-educated guesses as the trade market settles. Given an opportunity to set the odds, Morey took a pessimistic approach, framing it as a product of partnership, or lack thereof.

"I think it's less likely than likely, but hopefully I'm wrong," Morey said. "Look, it won't be from lack of trying. We have a whole team of front office [personnel], it's all we do. We have no other job that matters, it's all we're working on. And I only say less likely, it won't be because we don't want to do it, it will be because for whatever reason, I mean I can tell you that these other 29 teams, none of them wake up and say, hey, today, how can I help the 76ers get better? They're all worried about their own teams. The main reason I say less likely than likely is it takes two or three to tango. Trades are not easy to construct in this league, there's a lot of risk aversion, there's a lot of decision-makers that have to be hurdled."

All told, Morey's interview gave him enough plausible deniability for any outcome the Sixers might end up with at the deadline. If they bring in a young talent and preserve some flexibility for the future, they can sell it as their acknowledgment of the special talent they already have in place. If no deal gets done, Morey and the organization can say they've been more flexible on price but no one was willing to meet the price tag they have placed on a productive player who happens to be done with their organization.

And that's what has made this situation tough for Philadelphia. Morey acknowledged all the ways Simmons helps their team during Thursday's interview, noting that some of Simmons' key areas of contribution (playmaking, rebounding, and especially defense) become even more important in the playoffs, where they've had their eyes trained this whole time. He was careful to note that they don't want to make a deal for the sake of simply bringing in players people have heard of before, putting a band-aid on this situation that ends up hurting them in the long run.

"If all the trades at the February deadline only help us in a very marginal way, what we've done is not really help our chances this year, we just feel better about ourselves because there's a couple of names people maybe recognize," Morey said. "And we're like oh, this is exciting, we've got a couple new names, but we really haven't changed our place, and now we no longer have an ability to get an impact player later. This is literally our way to pair Joel with Tobias and another impact player to give ourselves a real chance to win. And if we just do a marginal trade that's mostly sideways because we'll all feel better that there are names playing on the court, that will hurt Joel, that will hurt the 76ers, that will hurt our whole roster in the long run more than if we're patient."

Same story, different day. If nothing else, Morey left himself with plenty of outs in the weeks and months ahead. No one is more aware of the options in front of the Sixers than Morey, who boiled down the oft-discussed topic to a binary decision.

"I think there have been various reports of [Simmons'] issues [with the organization]," Morey said Thursday. "We just need to either correct those reasons, which so far we haven't been able to do, or make a trade. Those are really our two options. And so far, I get the fan frustration that we've not accomplished either."