The Kings, Pistons, Hawks and others remain in the mix for the disgruntled Sixers guard, but will a deal get done before the Feb. 10 deadline? 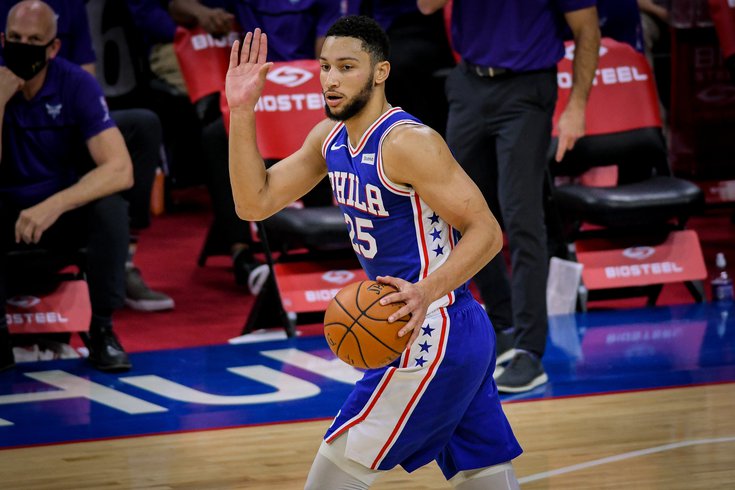 With around three weeks to go until the trade deadline, the Sixers continue to be one of the teams of great interest around the league thanks to Ben Simmons' continued absence in Philadelphia. Simmons is the biggest name viewed as gettable on the open market right now, and it's time for another quick fly-by regarding recent rumors and discussions.

The Sacramento Kings are said to be one of the most proactive teams in the league right now, if not the outright leader in activity heading into the trade deadline. The reasons why aren't particularly hard to figure out — the Kings are currently on the outside of the playoff picture, short of even a play-in appearance as things stand, and there is an urgency to rectify a 15-year postseason drought at the highest levels of the organization.

As we've discussed here frequently, that has brought them to Philadelphia's doorstep, both because Ben Simmons is an available player who might help them fix that problem and because of Daryl Morey's relationship with Sacramento exec Monte McNair. There has been clarity in any talks between the two teams because of their working relationship, even if that clarity has not produced anything of real substance yet.

To that end, it is PhillyVoice's understanding that no formal offer has been made on either side of the Sixers-Kings partnership. There have been ongoing discussions between the two franchises dating back to the offseason, but because of how the Sixers are said to value specific Kings players, most paths to a deal would involve third-party involvement.

De'Aaron Fox is the name that has come up most often in public trade rumors around the league, and dating back to the summer, Sixers sources have downplayed the possibility of exchanging Simmons for him for several reasons, from money to Tyrese Maxey overlap to concerns about fit with Joel Embiid. When the Kings have floated Fox's name out there, Philadelphia has effectively had to ask, "Okay, and?" because of their desire to send Fox to a third party in order to acquire who/what they actually want. On every front, Kings guard Tyrese Haliburton is viewed as a more attractive proposition for Philadelphia, though salary-matching a deal centered around Simmons and Haliburton would need to involve Kings vets on bigger contracts, a la Harrison Barnes.

(Barnes, for anyone keeping tabs beyond Philadelphia, is a guy who has some interest from different suitors around the league. He's a productive vet on a declining contract who could slot into a role for a better team pretty easily.)

As we reported recently, Barnes' assumed inclusion in many Kings trade packages is part of the reason for the smoke surrounding Tobias Harris' attachment to Simmons in deals. The Sixers are more aware of Harris' down year than anyone else and aren't so desperate to move his contract that they'd take a hit in a Simmons trade return just to move him this year. That's not to say Harris can't or won't get moved between now and the deadline, only that "actively shopping" and "would move in the right deal" are two different things, given the broader context and the importance of a Simmons deal for this organization.

Use this as your North Star between now and February 10th: Joel Embiid is viewed as the only untouchable player on Philadelphia's roster, the player who this team will be built around in the near, medium, and long term. The Sixers are going to listen to any number of proposals that come to Daryl Morey's desk, and if Morey views any deal as a boost to their chances to win a title, a different-looking team will take the floor for Philadelphia. It is that simple.

One last word on the Kings. There has been some dissent regarding their approach as recently as Wednesday evening — Shams Charania of The Athletic noted that Fox and his agent received assurances that the organization will build around him and are not interested in trading him at present. It's a report to be taken at least semi-seriously, though it does seem to be the outlier in recent reporting surrounding the franchise, with most plugged-in reporters out west noting that the Kings are looking long and hard at their foundation. They hardly have a choice but to stand publicly behind their current best players.

Some of the other trade suggestions floating around the ether right now have been rejected previously or recently. A recent report from Jake Fischer of Bleacher Report noted a Detroit Pistons offer for Simmons centered around Jerami Grant, an angle we explored (and mostly shot down) when rumors first surfaced toward the end of November. There are similar themes there as there are in Sacramento, though the Pistons are arguably an even worse partner for the Sixers than the Kings. Grant has positional overlap problems unless the Sixers find a Harris suitor, and they don't have a Fox/Haliburton type to offer perimeter creation upside, save for offering Cade Cunningham, which is not happening.

Another team that has come up quite a bit recently? The Atlanta Hawks, the idea being that action is needed following a disappointing start to the year. Grumbling from forward John Collins has made him a frequent source of trade speculation in recent weeks, some reports even linking Collins to Philadelphia in Simmons talks. What's not entirely clear is the direction the Hawks are going to head in this season and at this deadline — there is some talk of Atlanta scaling down and using this opportunity for a bit of a reboot to prepare for a better run next season, though it seems more likely that they'd make a more aggressive move aimed toward a playoff run this season.

The real mystery hovering over all of this is the recent buzz surrounding James Harden, a once and always Daryl Morey target who brought him plenty of wins in Houston. Though the most likely scenario still seems to be Harden re-upping with the Nets when it's all said and done, it is not viewed as a foregone conclusion that he'll be with the Nets for the long-term, and the Sixers have an obvious in with Harden that sets them apart from most franchises around the league. Philadelphia's confidence they can eventually bring in an impact player, one way or another, is one piece of why they've been said to be patient as a group from ownership down to the floor.

Whether the Sixers will actually stick to their guns and let this situation ride out until the very moment their price is hit is one of the league's favorite topics right now. They have been remarkably consistent, from internal messaging to Embiid's open politicking following last Friday's win over Boston, but multiple league sources are less confident they'll be able to keep this up through the deadline. Some view the deadline as the drop-dead date to get a deal done and view a pre-deadline deal as inevitable, believing the Sixers have only been this aligned through mid-January because they know they'll move on and get reinforcements when push comes to shove. But to be fair Philadelphia, the slam-dunk offer they are after doesn't appear to be out there, and there has not been a single sign of them caving, with most reporting outside of the organization underscoring this message — they're not taking the price other teams have tried to set.

With just a few weeks to go until the deadline, we're dealing with what feels like the same old rumors once or twice a week or so. While some minor deals a la the recent Cam Reddish trade may get done between now and the February deadline, expect any major activity to come in one big burst closer to the end of this process.

MORE: NBA Trade Rumors: How do Atlanta Hawks fit into Ben Simmons trade picture? | Does it actually matter if the Sixers trade Ben Simmons this year?