When will the Sixers get a deal done? That depends who you ask, with Daryl Morey's price remaining high and the deadline rapidly approaching... 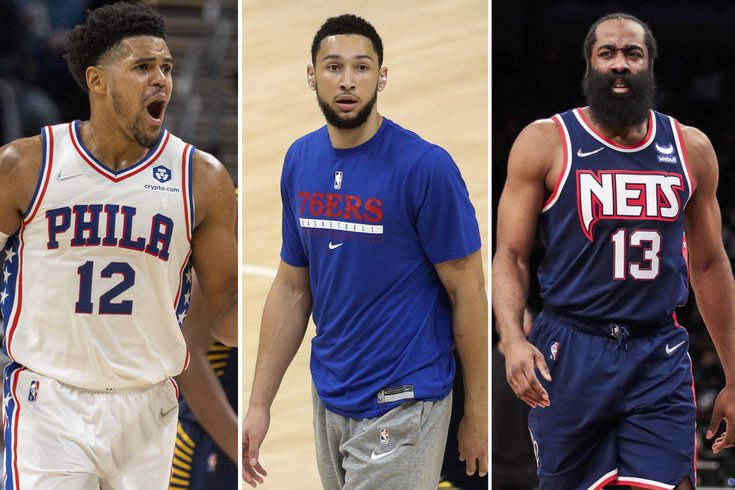 While there hasn't been any real traction just yet on a Ben Simmons trade, it feels like there's a new rumor involving the soon-to-be former Sixers guard every day. And that's not likely to slow down between now and next month's NBA trade deadline, which is just three weeks away.

At this point, the biggest question is no longer whether or not the Sixers will ship Simmons out — they crossed that bridge a long time ago and it doesn't seem like there's any turning back, with both sides dug in and claiming they'll wait this thing out for years if that's what it takes. No, the biggest question at the moment, aside from the obvious of where they trade him and what they get back, seems to revolve around when a deal gets done.

Will it happen before the trade deadline? Could it linger until the offseason, perhaps around the draft? Or will it carry on even longer as Daryl Morey refuses to bend on his All-Star caliber ask for a player whose value won't be getting any higher as he sits out and refuses to rejoin a team who has openly said it would welcome him back (and even tried to at one point earlier this season)?

MORE: Neubeck: Checking in on the Ben Simmons rumor mill as the trade deadline approaches

In the meantime, the Sixers are stuck. They're not only potentially wasting a year of Joel Embiid's prime if they wait until the offseason to make a deal, but they're asking him to shoulder an even greater amount of work night in and night out, including running down the floor on fast breaks like Simmons used to, and that is going to tax his body in a way that could have long term effects.

And on top of all that, they're playing in an Eastern Conference that once again seems wide open for the taking. The Nets are going to be without Kevin Durant for the next month and are already without Kyrie Irving for all their home games. The Bulls lost Zach Lavine and have gone into a free fall. And despite a Ben Simmons-sized hole in their roster, Tobias Harris playing more like a liability than an asset, and a number of injuries throughout the year to key rotation players, the Sixers are still just 2.5 games off the pace in the Eastern Conference (even though there are five teams ahead of them).

All that is to say that it would probably make sense for the Sixers to try to deal Simmons before the deadline. And by most accounts, that's exactly what they're trying to do. The problem is, Morey and the Sixers seem to place a much higher value on Simmons than the rest of the league, and so far, with top prizes Damian Lillard and Bradley Beal not looking any closer to being moved, the offers that have been reported are nowhere near the level Morey would accept. At least for now.

In recent days and weeks, in addition to things like the Kings making players available who previously weren't, new rumors have emerged featuring different paths for the Sixers to get a deal done, including packaging Harris with Simmons or waiting until the offseason and trying for a sign-and-trade with Morey's ultimate prize, James Harden.

Let's take a look at some of those recent rumors...

When will a deal get done? And will Harris be included?

[UPDATE: Late Wednesday afternoon, Shams Charania of The Athletic reported that the Kings are no longer interested in moving De'Aaron Fox and now plan to build around him and Tyrese Haliburton. However, there was interesting wording in his tweeting, saying that it isn't the Kings' "current mindset." And clearly with reports just a week ago saying they were willing to deal both those players, mindsets can change. It's also worth noting that Sam Amick added to Shams' report, saying that the Kings are no longer are interested in including Harris in a Simmons deal.]

Earlier this week, Sam Amick appeared on Liberty Ballers' "The Gastroenteritis Blues" podcast to discuss the Ben Simmons situation, and his feel is that a deal gets done before the deadline.

He was also asked about Marc Stein's previous report that teams would consider taking on Harris to help facilitate a Simmons deal, but said at the time that he didn't know if Sacramento would consider that, given what it would likely cost them in terms of matching salaries, but he knew that a Hawks deal centered around John Collins wasn't going to involve Harris, as Atlanta only wants Simmons.

As part of a recent roundtable with fellow Athletic writers John Hollinger and David Aldridge, Amick had the following to say about the recent claims from Simmons' camp that he's willing to sit out the entire year, why Embiid's comments last week about there being no urgency for the Sixers are a bit hard to believe, and the latest intel on a Sacramento team that suddenly seems to be more receptive to a potential deal involving Tobias Harris...

Amick: So we’re all in agreement that a deal likely gets done — partly because of the desperation level in the market. The Play-In Tournament has created a new NBA landscape where there are far more buyers than sellers, and that’s great news for Morey and the Sixers when it comes to maximizing leverage.

As our Shams Charania reported recently, the suitors include Atlanta, Portland, Sacramento, Minnesota and Indiana. The list likely doesn’t stop there, though, and that means Morey has a chance to maximize this Simmons situation while also not being so painfully patient that he costs Philly a year of Embiid’s prime in the process.

Make no mistake, sources close to Simmons continue to insist that he’ll sit out the entire season if a deal isn’t done by the deadline. To DA’s point, that means the postseason would be unnecessarily brutal on Embiid when it comes to the load he’s asked to carry. There is, not surprisingly, serious skepticism from Simmons’ side as to the authenticity of Embiid’s messaging.

“Joel is Daryl, and Daryl is Joel,” as one source put it.

As for which scenario is looking the most likely, I’ll say this much: While I’m fairly confident that Atlanta has zero interest in taking on both Simmons and Harris in a John Collins-centric deal, the Kings appear to be considering the idea more seriously. With that being the case, it’s then a matter of figuring out what the Sixers think of Kings point guard De’Aaron Fox and the various other pieces that could help them match those massive salaries ($67.5 million combined this season between Simmons and Harris). The deal could be done by adding sharpshooter Buddy Hield ($22.7 million) and veteran wingman Harrison Barnes ($20.2 million), but Philly would surely push for more.

... The Pacers’ Domantas Sabonis is a major focal point for the Kings, too, but Simmons appears to be front and center for now.  [theathletic.com]

Will Morey wait until the summer for Harden?

While some people believe that a deal will happen before the deadline, not everyone thinks that's necessarily the case.

Morey has been holding firm all along that he wants All-Star level compensation for Simmons, and given that he already once tried to trade Simmons for his former player James Harden, it's not a big stretch to believe that he'll try the same thing again. But in order to make that happen, it means no reinforcements for Embiid for the stretch run and playoffs. And given his importance to the team, you probably should make sure that's OK with him.

If the end result is a partnership with Harden, Stein thinks that's something the big man could be sold on.

"Perhaps [Embiid] has also been sold on a concept that executives with a growing number of rival teams say they see as Morey's new preferred scenario: Keeping Simmons beyond the trade deadline to exhaust every last possibility for executing a complicated sign-and-trade in the offseason that finally brings James Harden to Philadelphia and routes Simmons to Brooklyn.

"Complicated is a polite description for such a deal [...] Yet it must be noted that there is enough noise circulating leaguewide about Harden's reported openness to relocation this summer -- after he turned down a lucrative extension from the Nets in October -- to give Morey the encouragement he needs to wait."  [marcstein.substack.com]

Who says no? The Sixers, apparently.

Finally, we get to a recent rumor that highlights the types of offers the Sixers have been getting and why it actually might make the most sense for Morey and Co. to wait until the offseason to unload Simmons.

The situation in Philadelphia hasn't changed since July: Daryl Morey's front office has thus far rebuffed any Simmons offer that hasn't included an All-Star-caliber partner for Joel Embiid who's on the Sixers' wish list.

The Pistons' package of [Jerami] Grant, Saddiq Bey, Kelly Olynyk and a first-round pick, for example, was not met with much enthusiasm by Philadelphia brass, league sources told B/R. But when that deal construct began to circle around rival NBA front offices this fall, it also alerted teams to Grant's surprising availability.

As Simmons is still unlikely to be moved, Grant has attracted around a dozen suitors. With apologies to Myles Turner, "He's the grand prize of this deadline," one team strategist said.  [bleacherreport.com]

That's certainly not going to get it done, but that won't stop the Pistons from trying to move Grant, as Fischer goes on to outline a number of teams who appear to be interested in the former Sixers forward.

So when will Ben Simmons be dealt? And where? And for whom? We're probably not any closer to knowing those answers today than we were yesterday, because tomorrow there will probably be a new rumor with a new team and a new offer. And then we can start this whole exhaustive exercise over again. And then again. And again.

Buckle up, the next couple of weeks are going to be an interesting ride.