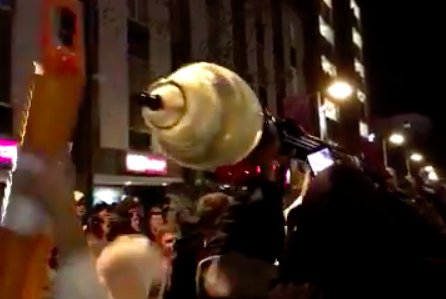 Penn State dramatically sealed the Big Ten title and landed a spot in the Rose Bowl with their comeback 38-31 victory Saturday night over Wisconsin, but the rabid fan base in State College couldn't contain itself as requested by the university.

Prior to Saturday's championship game in Indianapolis, a letter from Penn State administrators urged those watching in Happy Valley not to "spoil the accomplishment" by rioting and destroying property on campus. Police in State College have been generally been on high alert since late October, when hordes of unruly fans caused an estimated $30,000 in damages following another thrilling 24-21 win over archrival Ohio State.

Despite the preventive measures, some fans defied the call to respect Penn State's campus. In one instance, rioters plucked a lamppost from the ground and paraded it down the street.

welcome to penn state where people steal light posts and you get sprayed with tear gas #bigtenchamps pic.twitter.com/m0C0SH6RLQ

Some of the damage caused by the riots early Sunday morning after Penn State's win in the Big Ten championship. pic.twitter.com/muFlloaE9U

Just after 9 p.m. Saturday night, Penn State police issued an alert for the crowds to disperse. Their warning of possible arrests failed to clear the streets.

The crowd on Beaver Ave is an unlawful disturbance, leave the area or be subject to arrest.

Several videos of the ensuing chaos have surfaced online in the hours after the riots. Penn State fans can be seen scrambling away from tear gas in the video below.

Another video shows a rioter swinging from a lamppost until the light shuts off.

In the aftermath of the Ohio State victory, 13 people were eventually charged, including felony riot charges five Penn State students who could face prison time.

No charges have been announced in Saturday night's riots.

Penn State will compete in the Rose Bowl on January 2 against an opponent yet to be determined.