Rusty patched bumblebee formerly had been found throughout East Coast, much of Midwest

By Staff and Wire Reports 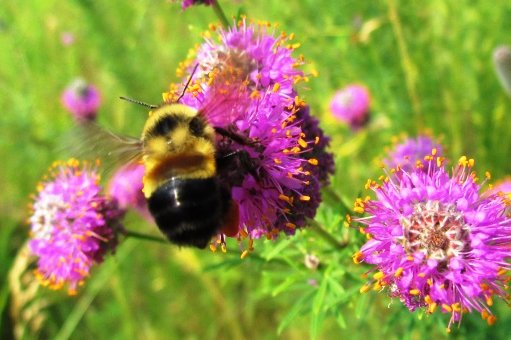 Populations of the rusty patched bumblebee are dwindling, according to the U.S. Fish and Wildlife Service and the species is on the brink of extinction. On Tuesday, the insect became the the first-ever bumblebee to be added to the endangered species list. Locally, a population of the bee has been found in Delaware County, Pennsylvania.

The rusty patched bumblebee has become the first bee species in the continental U.S. to be declared endangered after suffering a dramatic population decline over the past 20 years, federal officials said Tuesday.

The U.S. Fish and Wildlife Service told The Associated Press it was adding the bee – which only can be found locally living in Delaware County – to the endangered list, and would develop a recovery plan encouraging people to provide more habitat and reduce pesticide usage.

Many of the steps needed to rescue the rusty patched bumblebee might also help other struggling bees and monarch butterflies, which pollinate a wide variety of plants, including cultivated fruits and vegetables, officials said.

"Pollinators are small but mighty parts of the natural mechanism that sustains us and our world," said Tom Melius, the service's Midwest regional director. "Without them, our forests, parks, meadows and shrublands, and the abundant, vibrant life they support, cannot survive, and our crops require laborious, costly pollination by hand."

The rusty patched bumblebee buzzed across the East Coast and much of the Midwest in high numbers as recently as the 1990s. Today, only scattered populations remain in 13 states — Illinois, Indiana, Iowa, Maine, Maryland, Massachusetts, Minnesota, North Carolina, Ohio, Pennsylvania, Tennessee, Virginia and Wisconsin — and the Canadian province of Ontario. The bee's historic range and the number of observed colonies have plummeted by about 87 percent since the late 1990s.

Delaware County is the only location in either Pennsylvania or New Jersey believed to have a rusty patched bumblebee population. But that belief comes from a single vouchered bee submitted to the U.S. Fish and Wildlife Service in 2006 by a Pennsylvania wildlife agency.

The bees require a continuous supply of flowering plants from April through October, preferably native plants and spring blooming shrubs, according to the U.S. Fish and Wildlife Service. Many bees build their nests in undisturbed soil, abandoned rodent burrows or clumps of grass near such plants.

They can exist in myriad habitats, including woodlands, marshes and agricultural landscapes that have flowering plants throughout the season. The areas must be void of insecticides that may unintentionally kill the bees.

The bumble bee population crash happened so quickly that few researchers took notice until the damage was largely done. They're investigating a number of potential causes, including disease, pesticide exposure, habitat loss, climate change and the domino effect of falling populations making it harder for bees to find suitable mates.

The Xerces Society for Invertebrate Conservation, which petitioned the government to list the rusty patched bumblebee as endangered (a process described in the documentary video embedded below), previously said the bumblebee's decline probably was caused by the spread of bacteria or viruses from bumblebees raised commercially to those in the wild. The group, based in Portland, Oregon, also blamed widespread use of long-lasting insecticides.

"The Fish and Wildlife Service has relied upon the best available science and we welcome this decision," Rich Hatfield, the society's senior conservation biologist, said Tuesday. "Addressing the threats that the rusty patched bumble bee faces will help not only this species, but countless other native pollinators that are so critical to the functioning of natural ecosystems and agriculture."

Fish and Wildlife Service biologists agreed there probably were overlapping factors behind recent declines of bumblebees, honeybees and monarchs — raising concern for all 48 bumblebee species in North America. The agency in September placed seven species of yellow-faced bees in Hawaii — that state's only native bees — on the endangered list. A study continues on whether to list the monarch butterfly, agency spokeswoman Georgia Parham said.

Bees and other insects provide billions of dollars' worth of pollination services in the U.S. each year, benefiting crops such as tomatoes, cranberries and peppers. Even plants that can pollinate on their own generate bigger fruit when bumblebees do the job instead. 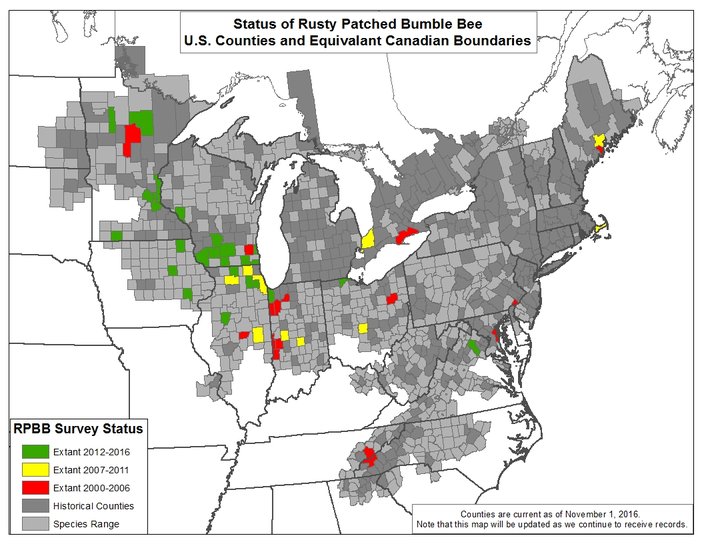 They also support growth of flowers and wild plants that produce fruits, seeds and nuts essential for natural food chains.

The Endangered Species Act prohibits significant modification or degradation of habitat that leads directly to death or injury of listed species. Officials said they would encourage individual landowners and local organizations to adopt "bee-friendly practices," including use of native flowering plants for landscaping, planting flowers and trees that bloom from spring through fall, and avoiding use of pesticides that harm bees.