Dîner en Blanc: Philadelphians coming together, in a sea of positivity 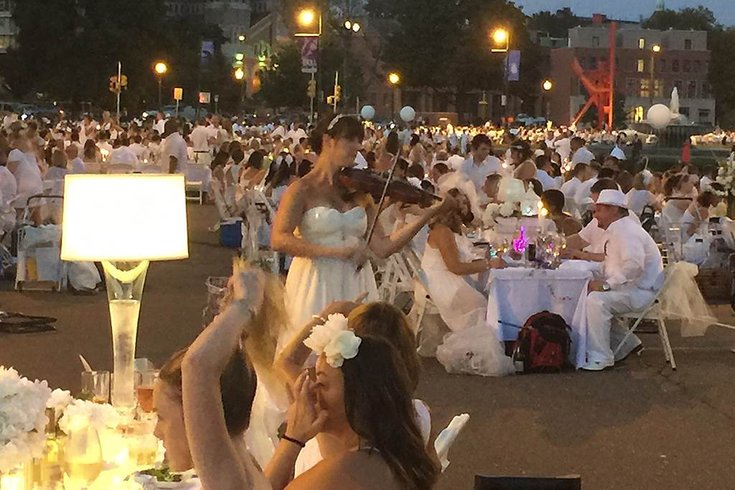 Diner En Blanc was held on the steps of the Philadelphia Museum of Art in August 2016.

In response to critics of his unfair, and sometimes silly, takedown-attempt of Thursday’s Dîner en Blanc, Brian Hickey suggested that, instead of tweeting at him, the pro-DEB crowd could submit their own commentary to Philly Voice.

It was a taunt: as if none of the event’s 5,000 attendees would be capable of writing 600 coherent words defending it. Well, I had an extra 45 minutes this weekend.

I attended DEB as a journalist (I cover Philadelphia and the rest of the country for a number of publications, including Washington Post, USA TODAY and Travel + Leisure).

Would I have gone otherwise? And had to drag a table, chairs, picnic dinner and wine around town? I can’t say for sure.

But, here’s what I do know: I’ve never seen an event like DEB and I cover "bougie" (Brian’s word) events and activities for a living.

Philadelphia is leading the country in the movement to revitalize underused and unexpected public spaces by turning them into destinations. Think: Spruce Street Harbor Park and the PHS Pop Up Garden at the Viaduct Rail Park. We’re getting national attention for these exciting experiments that draw locals and visitors to the city.

Along those lines, what I loved most about DEB was experiencing a site I’ve been to dozens of times in a completely new way. I’ve been to the Art Museum steps for class trips, jogs with my husband, and charity walks, but it was more beautiful than ever on Thursday.

If you’ve seen pictures, you know it was physically beautiful. Picturesque, Instagram-worthy. But more than that: The crowd glowed and not because everyone was wearing white. The night was a sea of positivity. It brought together Philadelphians of all races, ages, sexualities, zip codes, gender identities, tax brackets, senses of style and culinary skill. Everyone smiled. No one pushed, sneered or criticized. That’s rare for Philadelphia. Strangers complimented one another and happily snapped photos of each other in front of our city’s iconic skyline and most impressive museum.

Dîner en Blanc makes attendees happy. It doesn’t hurt anyone. Organizers pay for all city services employed to host it. Now, to quickly debunk some of the hyperbole in Brian’s commentary.

Even in an affordable city like Philadelphia, $45 is not an unreasonable night out. It’s a casual dinner and a movie. It’s a ticket to a concert and a beer.

The event is open to the public and is not exclusive.

The amount of trash that Brian photographed Friday morning could have fit in a brown paper lunch bag. The photos reminded me of the "We Will Rebuild … Never Forget" memes after the minor 2012 earthquake that lightly shook parts of the East Coast. The vast majority of attendees brought trash bags and cleaned up their tables. And DEB covered the costs for “the guy in a blue 'STAFF' T-shirt who toted a trash bag around” to collect any remaining debris. I doubt that the man’s morning was “hellish.”

I actually thought some of Brian’s tweets on Thursday were funny. I "liked" one or two of them and ignored the negative ones. After my Facebook comment disagreeing with his story though, he blocked me on Twitter. Seems undeserved. Shouting insults and silencing the opposition is the worst of today’s internet. And proof that there are worse things out there than a group of happy people wearing white to a picnic.

Sarah Maiellano is a Philadelphia-based freelance writer. Read her work at www.sarahmaiellano.com.