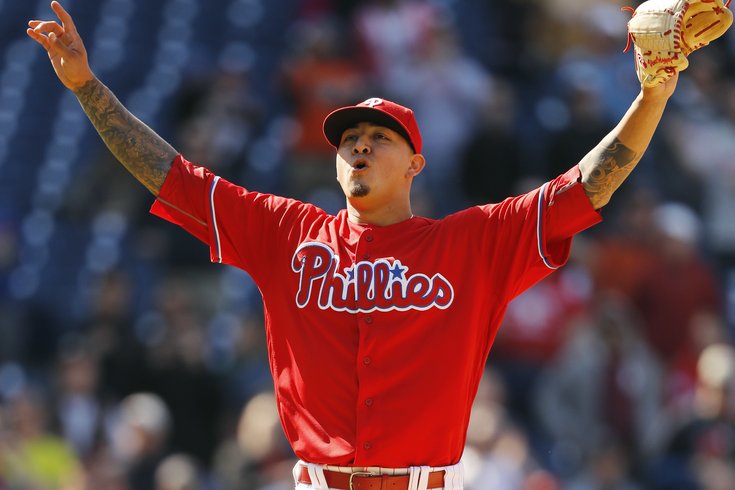 The Phillies will try to nab the best available player in the top pick of the MLB draft in two weeks. But they should also be able to get a possible difference maker in the second round, too, where Vince Velasquez was chosen in the 2010 draft.

His team hadn’t won a game yet, and he wanted to make sure everyone knew the Phillies “aren’t losers.” So he struck out nine batters in six shutout innings to lead his new club to their first victory in 2016.

But the Southern California kid dubbed “Vinny from Philly,” by his friends following the December trade that sent him from the Houston Astros to the Phillies for closer Ken Giles, wasn’t anywhere near finished making that statement, apparently. On Thursday afternoon, he had the opportunity to pitch at Citizens Bank Park for the first time in his young career.

Vince Velasquez, all of 23 years old, had the chance to show the people of Philadelphia what he was all about. He gave them one of the most memorable pitching performances in a decade chock full of Phillies masterpieces on the mound.

In a matinee against the futile San Diego Padres, Velasquez went the distance, striking out 16 without walking a batter en route to a three-hit shutout in 2-0 Phillies victory. When Wil Myers, once labeled baseball’s top prospect, flailed at a 96-MPH fastball in the ninth for the game’s final out, Velasquez raised both of his arms and then heroically punched his borderline-lethal right arm into the air in celebration.

“It was exciting … my emotions were just running high and I kind of had to settle down,” said Velasquez, who added that he hadn’t struck out that many batters since his days at Garey High School in Pomona, Calif. “I didn’t think about it. Just go out there and try to pitch and, when you have two strikes, then why not get the strikeout?”

But racking up 16 strikeouts without issuing a walk in a shutout? It’s rarer than a no-hitter or even a perfect game.

“It looks like we made a pretty good trade, I'd say,” Mackanin joked. “How much fun was that to watch? His actions speak for themselves."

But if you go all the way back to 1913, when Baseball-Reference.com's database begins, only eight pitchers have done it in the last 103 years: Luis Tiant, Vida Blue, Dwight Gooden, Clemens (twice), Wood, Johnson, Max Scherzer, and Vince Velasquez.

“To feel a part of that, it’s pretty exciting,” Velasquez said. “I’m not that type of person to set expectations to get more strikeouts, I’m just trying to go out there and pitch and see where it leads up to.”

On Thursday, it led to the Phillies fourth win in their last five games, a stretch that began with Velasquez’s first start on Saturday night in New York. After his first two starts, Velasquez has an untouched 0.00 ERA and 25 strikeouts.

The latter set a new club record. Velasquez’s 25 strikeouts are the most by a Phillies pitcher after his first two starts with the team in the modern era. Hall of Famer Jim Bunning (20 Ks in 1964) was the previous record holder.

The 15 scoreless innings Velasquez has racked up are the most by a Phils starting pitcher to begin his career with the team since Marty Bystrom (19 innings in 1980).

“It looks like we made a pretty good trade, I'd say,” manager Pete Mackanin joked. “How much fun was that to watch? His actions speak for themselves. … He overmatched that team today.”

Velasquez was dominant right out of the dugout, striking out each of the first three hitters he faced. Just as he set the tone for the week ahead on Saturday night in New York, Velasquez struck first in the latest of a string of pitching duels with San Diego.

Just as Maikel Franco gave Jerad Eickhoff all the support he’d need Wednesday, with a solo home run and an RBI double, Ryan Howard was Velasquez’s offensive support system, slugging a solo home run (his third of the year) to lead off the second inning and adding a sacrifice fly in the sixth.

The Phils tacked on a third run on a wild pitch.

The Phillies really didn’t need an insurance run, or anything more than Howard’s solo homer. Velasquez was close to unhittable.

“You're throwing 95-97 with a downward plane, it's tough,” Mackanin said. “That's why he threw so many fastballs by those guys. He's going to continue to do that.”

Sure, it helped that the Padres happened to be the team in the other dugout. Thursday’s loss was the fifth shutout loss for San Diego in their first 10 games, which is a major-league record, according to the Elias Sports Bureau.

The only time San Diego appeared to even sniff what Velasquez was dealing – a fastball that reached 97 MPH, a mid-70s curveball that tried to rival Jerad Eickhoff’s fearsome hook from a night earlier, and changeups and sliders mixed in on occasion, too  – came in the second inning when they collected a couple of two-out singles. Velasquez responded with a strikeout, of course, ending the threat.

“That’s the competitor he is,” catcher Cameron Rupp said.

Velasquez’s 113-pitch gem was the first 16-strikeout game by a Phillies pitcher since Cliff Lee in May of 2011. As the strikeouts mounted in the final innings, the ballpark of a little more than 18,000 was like the little engine that could, trying to replicate the energy of a Roy Halladay postseason no-hitter.

It was the most exhilarating Phillies game since Cole Hamels no-hitter nine months ago. But unlike that afternoon at Wrigley Field – the highlight of a dreadful summer and 99-loss season, the swan song of Hamels’ Phillies career – what Velasquez provided on Thursday afternoon wasn’t just a game that flirted with pitching perfection but also a window into the future and the latest sign of hope for a franchise in transition.

Velasquez, Eickhoff, and Aaron Nola. The budding hitting prospects on the farm. The No.1 overall pick in June’s draft. The payroll flexibility coming after this year.

“We’re coming around just fine,” said Velasquez, leading a rotation that’s sporting a stingy 2.14 ERA through 10 games. “A lot of people get bummed out because we went 0-4 the first 4 games but you know, I kind of help the team out by setting that tone, to show people we’re not losers, we’re all winners here.”

Velasquez has won each of his first two starts in a Phillies uniform. His next will come on Tuesday night at Citizens Bank Park against the Mets (and possibly right-hander Jacob deGrom).

If Velasquez sticks with what’s been working in his first two starts, it won’t matter who’s on the other side.

Of the 27 outs Velasquez recorded on Thursday, only four were hit into the outfield. He was downright filthy and he appeared to gain momentum with each strikeout recorded, with each inning finished.

“He’s out there, he’s got a little bit of edge to him,” Rupp said. “He’s coming after you. … He’s going for the kill immediately.”

Does that edge have anything to do with being drafted by Houston and breaking into the big leagues with the upstart Astros last summer, only to be traded away over the winter to a 99-loss team?

“I’m beyond that,” Velasquez said. “I don’t even think of that. My job is to pitch for the Phillies and the Phillies only. They traded me, so my job is here. This is home for me, this is my home.”

With that kind of talk and more games like his first two with the Phillies, Velasquez is going to be a fan favorite fast in South Philly. And maybe the Phillies, projected by many to flirt with 100 losses again this summer, will be both more competitive and fun in 2016, too.

The Phillies (5-5) don’t have a winning record just yet, but following Thursday’s win, they’ll enter Friday without a losing record after 10 games for the first time in the last three seasons.

"The last two nights, that's about as good as it gets," said Rupp, who was on the receiving end of 16 scoreless innings from Velasquez and Eickhoff. "We’ve got a big weekend with Washington coming to town. They’ve got a good lineup, good arms. It’s going to be a good test for us."

And, oh, by the way:  Vince Velasquez achieved another memorable career milestone on Thursday, one that went overshadowed by the Ks he was collecting by the bundle. He singled off San Diego's Drew Pomeranz to lead off the third inning.

It was Velasquez's first major league hit (he didn't have a plate appearance in 19 games with Houston last season). Afterward, he said he looked "ugly" in his other at-bats.

"But I'm not a hitter," Velasquez said, "I'm supposed to go out there and pitch, just like I did today."