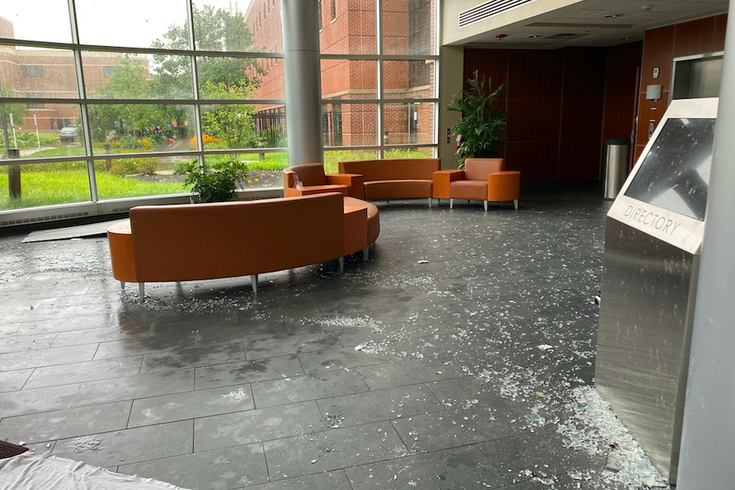 Penn Medicine's radiation oncology center, located in the Pavilion at the Doylestown Health system campus, was heavily damaged by Tropical Storm Isaias on Tuesday, Aug. 4, 2020. Kevin Weber, a radiation therapist, was among staff members who helped evacuate the nearby Children's Village Childcare Center.

Kevin Weber heard a loud bang on Tuesday morning in Doylestown. Then the power went out at Penn's radiation oncology center, where he was treating a patient.

The emergency lights flipped on around them.

The medical director at the oncology center rushed back to the radiation vault, joined by a group of patients. The waiting room's glass had been blown out by the storm.

The walls of the vault — shielded with lead, concrete and brick — are the exact kind of protective environment designed to handle emergency protocols. The group took shelter there for about 10 minutes, but it soon became clear the damage was more significant elsewhere.

"As soon as we opened the door, we saw the destruction at the daycare center," Weber said on Wednesday.

The roof of the nearby Children's Village Childcare Center had collapsed from a possible tornado. The fire department had just arrived at the scene just after 11:15 a.m. More than 135 children, from infants to kindergarteners, had been sheltered inside the building with another 25 teachers.

Weber, who turns 30 on Thursday, volunteered to help firefighters and daycare supervisors bring the some of the children to safety. He was joined by other volunteers from the hospital, including nurses who rushed over to help account for everyone at the daycare center.

The place was especially significant to Weber because his mom works there. She was off on Tuesday, but Weber knew how to gain access to the room that she normally supervised. It was the only one that had yet to be evacuated.

"The roof had collapsed on the hallway, so we went around to an exit that goes to a playground in the back of the building," Weber said. "There was broken glass everywhere. The door was hanging, so we ripped it off and entered the room."

They heard a faint voice.

"We're in here," the teacher said, calling them to a classroom closet, where she and 14 students had taken shelter to wait out the storm.

Many of the students were evacuated to the radiation vault, where they were kept safe until they could be bussed to nearby Lenape Junior High School to be picked up by their parents.

"There were definitely kids who were scared and confused as to what was going on, and a lot of screaming, but there were so many people who intervened to calm them down," Weber said.

In fact, Weber considered the overall response a textbook example of teamwork and disaster preparedness. It showed that everyone from the hospital to the daycare center had practiced their drills and knew how to respond, even though situations such as these are inherently unpredictable.

"Nobody ever stopped to think for even two seconds," Weber said. "It was just go, go, go."

Given the amount of damage, it was shocking that only minor injuries were reported from the incident. Weber described playground equipment strewn across the parking lot, damage to cars, and a displaced shed and dumpster he never managed to locate.

"When you see the building, you don't assume it's minor injuries," Weber said.

The cancer center will be closed for at least the rest of the week while crews assess damage. The future of the daycare center hasn't yet been determined, but Doylestown Health is working to identify a safe site to continue programming in the interim.

A fundraiser launched Wednesday gives donors the option of designating funds to the daycare center or for general use to address damage across the campus.

Weber said he's been reliving each moment since Tuesday morning. Though it feels to him as if it happened in five minutes, the situation actually unfolded over about half an hour.

"It's amazing how many people came together and got the job done in a huge way," Weber said. "I'm proud to be a part of Penn for preparing us and our department to respond to something like that."