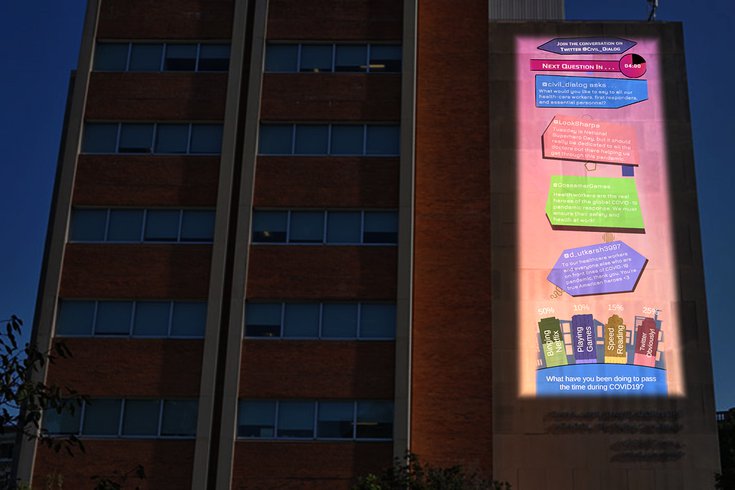 Civil Dialog, an installation led by students and faculty at Drexel University, will use the side of Nesbitt Hall on Market Street told a conversation about topics of the day. The project will run nightly from 9-10:30 p.m. from Aug. 12-15.

West Philadelphia residents may notice a social media feed scrolling down the side of 7-story building over the next few nights.

Not to be alarmed — it's an installation led by Drexel University professor Frank Lee.

The project, Civil Dialog, is intended to foster communication about current events and social issues, using the facade of a building as the point of conversation.

"Our hope is that this project will create a lasting, productive and informative dialogue between groups who may not have otherwise had the opportunity to communicate openly to one another," Lee told Drexel Now. "We want this to be a space where residents and viewers can develop empathetic views and become co-creators of public space – both virtual and on Drexel's campus."

Lee is well-known for utilizing the city's architecture for social experiments. In the past, he's turned the LED lights of the 29-story Cira Centre into a giant arcade game, even inviting middle-school students to use the building for games they created themselves.

"This project reflects Frank Lee's usual originality and creativity. He is always trying to find new ways to link his digital media skills with civic space and engagement." Cohen said. "We in the Pennoni Honors College are glad to promote this and encourage our students to take part."

The rules are pretty straightforward: (1) Aim for PG language, (2) Avoid insulting and hateful speech, (3) Do not promote violence and (4) Text replies only, no pictures or videos.

"We really want this to be a chance for people to express thoughts and feelings that have been weighing on them during the pandemic," Lee said.