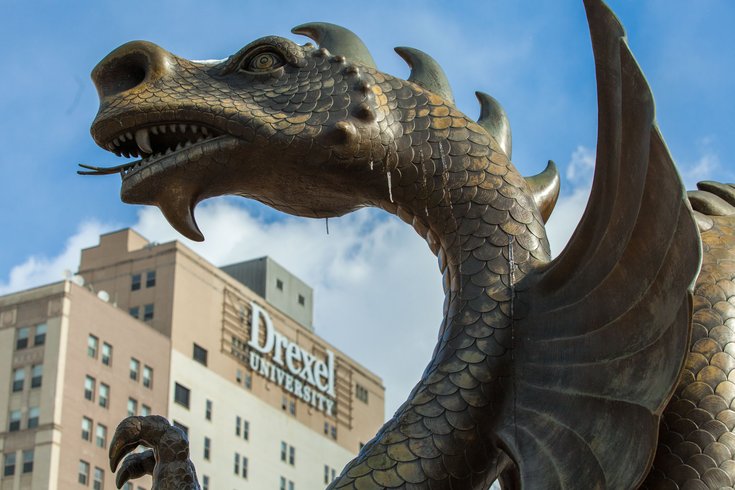 The Drexel Dragon on Drexel University's campus in University City.

The university is one of six schools — including the University of Washington, George Mason University, the University of Texas at San Antonio, Norwich University and the University of Colorado-Colorado Springs — to partner with the Army. The U.S. Army Reserve Cyber Public Private Partnership Initiative (Cyber P3i) allows reservists to receive specialized military cybersecurity training as well as enroll at Drexel using scholarships provided through the program and the GI Bill.

This isn't the first time Drexel has worked with the government regarding cybersecurity. When the university launched its Cybersecurity Institute in 2014, it informally partnered with both the Army and Air Force to train personnel.

Lt. Gen. Jeffrey Talley, chief of the U.S. Army Reserve, said the partnership comes at a time when cybersecurity is an increasing concern.

“The demand for these individuals and units far outpaces the current cyber soldier and unit inventory,” he said in a release. “The GAO [Government Accountability Office] estimates that there is currently a need for 40,000 cybersecurity professionals just to satisfy the government’s demand. Our belief is the Cyber P3i effort will serve as a seed to enhance these critical efforts and lessen the skilled soldiers shortage gap.”

The program aims to build upon cybersecurity research and training labs. USAR leaders will also establish a career network for grads and mentor middle- and high-school students.

“Our missions are one in the same: educate the next cadre of cyber intelligent professionals that our nation requires to counter emerging threats and risks," said Norman Balchunas, operations director of the Drexel Cybersecurity Institute. "This program will turn out top-notch cybersecurity leaders who will be prepared to take positions both in the armed forces and the government, as well as the private sector.”