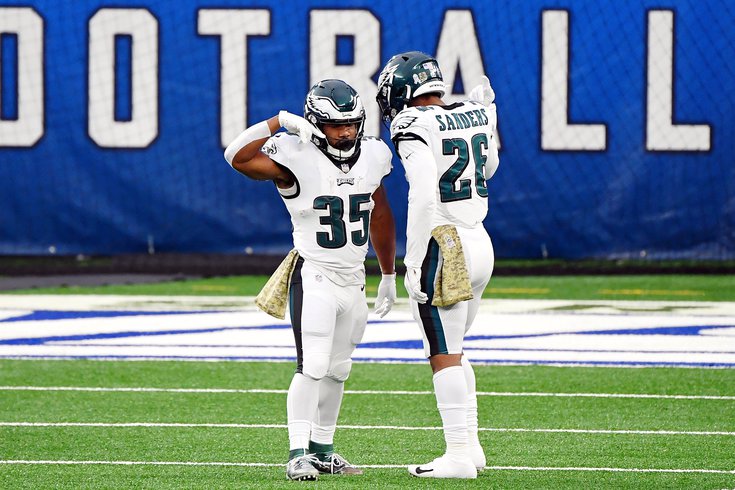 We started with the quarterbacks on Friday. Today we'll look at the running backs, of which they have many.

When Sanders entered the league as a rookie in 2019, there were three areas of concern with his game:

Most were not concerned about his ability as a pure runner coming out of Penn State.

During the 2019 season, Sanders put those three areas of concern to bed, but during the early part of the season, he was slow to adapt to the NFL as a runner, as he often danced in the backfield and did not hit open holes with authority. His concern areas were actually positives, and his good traits from college were negatives.

To Sanders' credit, he acknowledged his faults (not always an easy thing for professional athletes to do), worked at correcting them, and by the end of his rookie season, it looked like the Eagles had themselves a complete three-down running back.

In Sanders' second season in 2020, those three concern areas reemerged in a big way, as he was poor in pass protection, he led the team in dropped passes, and he fumbled four times. However, he was also one of the rare players on a terrible Eagles offense who could make a big play. Sanders ran 164 times for 867 yards (5.3 yards per carry), and 6 TDs, with three runs of at least 74 yards. And he did it behind the most banged-up offensive line in the NFL.

The Eagles will be looking for Sanders to put it all together in 2021. He showed that he could be weapon in the passing game while also avoiding pass protection and ball security mistakes as a rookie, and he proved that he could be a home run hitting runner in his second season.

Even with a lot of bodies at running back on the roster, none have Sanders' ability, and he should have plenty of opportunities to produce. With opposing defenses having to account for something of a second running back in Jalen Hurts in the backfield, Sanders could theoretically benefit more open space on his carries.

Sanders has already proven once that he can take accountability for his shortcomings, and fix them. We'll see if he can do that once again throughout camp.

When we took a deep-dive look at Scott's 2019 season, we identified that the most effective usage of him was in the screen game. He sees the field well, he knows how to patiently let his blockers in front of him do their job, and he hits the gas when there's daylight. He's very good at it.

Unfortunately for Scott in 2020, the Eagles' screen game was an abomination, and certainly, the fact that the Eagles had so many offensive linemen shuttling in and out of the lineup had a lot to do with that. If the offensive line can stay healthier this year and Nick Sirianni can scheme up more effective looks in the screen game, Scott can become a dangerous weapon in that kind of role once again.

As a runner in 2020, Scott had good numbers. He rushed 80 times for 374 yards and 1 TD, while adding 25 catches for 212 yards and 1 TD in the passing game. He was a huge reason why the Eagles got one of their rare wins (against the Giants) last season:

Scott will very likely be the No. 2 back to start the season, but he's also at risk of losing touches to rookie Kenneth Gainwell, and his future with the team beyond the 2021 season is in question, given that he'll become more expensive as a restricted free agent next offseason if the team keeps him.

Gainwell has running back / slot receiver versatility, much like a number of other players coming out of Memphis in recent years, like Tony Pollard (Cowboys) and Antonio Gibson (WASTEAM), who have both been effective players early in their careers in the NFL.

In OTAs, during the portions of practice that we got to see, the team only ran individual drills (no team), so there were no 7-on-7's no 11-on-11's, no offense vs. defense in any way. In other words, we only saw players practicing against ghosts. With that disclaimer in place, I liked the way Gainwell ran routes and caught the football. His movements are smooth, with little wasted motion, and he plucked the ball out of the air with his hands. This isn't the best of example, but you can kind of get the idea here:

Gainwell is a player who could be a great litmus test for the Eagles' new coaching staff, in terms of the development of his skills, and how creative they get in his usage, especially in what looks to be a packed backfield, at least on paper.

After a productive college career at Auburn, Johnson was a second-round pick of the Lions whose career got off to a fast start, but who saw his yards per carry average decline in each of his next two seasons. He suffered a sprained left knee that caused him to miss six games in 2018, and a torn meniscus that caused him to miss eight games in 2019.

Johnson wore a bulky knee brace in 2020, and he said that he plans to continue to wear it for the remainder of his career, for peace of mind purposes. As you can see below, he only carried the ball 52 times last season.

A few weeks ago, we took a look at Johnson's 2020 season, and the short-short version of our takeaways were as follows:

Johnson was a cheap, no-risk addition, and it will cost the Eagles nothing if they release him during camp. The meniscus tear in 2019 — and Johnson's subsequent 2020 game film as a runner — are areas of concern, but he's worth taking a look at in camp, given his age (he just turned 24), and low mileage (only 283 career carries). At a minimum, I believe he offers more than Jordan Howard both in pass protection and as a short-yardage back.

Howard proceeded to have a horrible 2020 season in Miami, as he carried 28 times for 33 yards (1.2 YPC) and 4 TDs with the Dolphins, before they released him. He was then scooped up by the Eagles, and appeared in two games the rest of the season, carrying 7 times for 27 yards.

At the time the Eagles brought Howard back, it was believed by some that he was solely a short-yardage running back in Miami, hence the extremely low yards per carry average. That is false, as 15 (more than half) of Howard's carries came on plays in which the Dolphins had at least four yards to go for a first down. On those carries, Howard averaged 1.9 yards per carry.

Even as a short yardage back, Howard wasn't very effective, even if he scored 4 TDs. He carried 13 times on short yardage situations (1-3 yards to go), and only managed 8 yards (0.6 YPC), and 6 first downs (which would also include his 4 TDs). As noted above, the belief here is that Johnson would be more effective in that role than Howard.

Huntley has some speed and he was a good returner in college, but he was only active for five games last season after the Eagles claimed him off of waivers from Detroit after 53-man cutdowns. He'll get a longer look this year in training camp, after spending his 2020 offseason with the Lions, but will probably have to win the kick returner job to crack the roster.

Killins should maybe be included with the wide receivers, since he was getting reps out of the slot during OTAs, but for now we'll list him with the running backs. In 2020, as an undrafted free agent, Killins spent most of his season on the practice squad, though he did appear in one game, catching one pass for 2 yards, and rushing once for -12 yards.

He has speed, but at 5'7, 177, he went down during camp last year if a swift breeze hit him. He'll probably be in competition with Huntley, Scott, and others for the kick returner job.

Aside from one game in which he was activated (but didn't play), Holyfield spent the entirety of the 2021 season on the Eagles' practice squad. Hard runner, little juice.

Can Sanders put it all together and become a compete back in 2021, as a runner, receiver, pass protector, and protector of the football? If so, he can be a top 5-10 kind of back in the NFL, but the Eagles need to get more consistency from him.

Sanders aside, the Eagles have a dynamic young back to groom in Gainwell, and a pair of players who are excellent in specific areas, like Scott (the screen game) and Johnson (pass protection).

With Sirianni as the Colts' offensive coordinator in 2020, Indy backs Nyheim Hines and Jonathan Taylor combined for 99 receptions, so there's some belief that Sirianni will look to heavily implement running backs into the Eagles' passing offense, which makes sense, given the skill sets of the backs they have, and their lack of premium talent at wide receiver.

At their core, the Eagles want to be a pass-heavy team, but their roster screams that they should perhaps look a little bit more like the Baltimore Ravens and their run-oriented attack behind Lamar Jackson and their stable of backs. To be determined if Sirianni sees it that way as well, and if Jeffrey Lurie and the gang will let him run an offense that puts his players in the best position to win games with what the roster they have. If so, this running back group will be a key determining factor of the Eagles' offensive success in 2021.