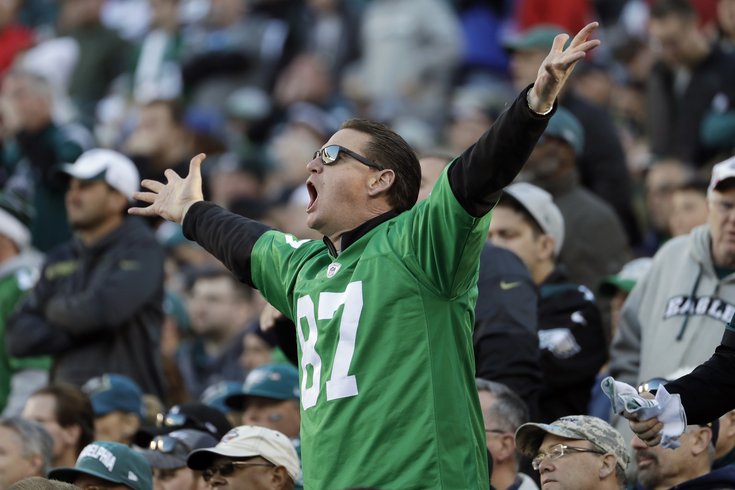 Would the Eagles really trade out of the first round?

Let's try an experiment, shall we?

Imagine it's around 9:50 p.m. on Thursday night. You're standing on the Ben Franklin Parkway with thousands of NFL fans, many wearing midnight green, when Roger Goodell steps to the podium.

At least that's what you're expecting to hear. But instead, you hear this:

What he says after that never makes it to the part of your brain that gives meaning to words. In part, because your mind is subconsciously rejecting the notion that Howie Roseman would dare trade the Birds' first pick in his city's own draft. But the main reason you never process the second half of Goodell's announcement is because you can't hear him over the growing roar approaching from behind you and making it's way to the stage.

RELATED: NFL Draft scenarios that will produce the funniest reactions from Eagles fans

Unfortunately, that scenario, at least the part where the Eagles trade back in the first round, is totally plausible. And given the depth at certain positions of need for the Birds, some draft analysts – ESPN's Mel Kiper and Todd McShay among them – believe that would be their best move, even if it's extremely unpopular.

“I would try to trade out of there if I could," Kiper recently told PhillyVoice. "Obviously, if a [Christian] McCaffrey’s there, you take him. But I would try to trade. Unless they have a strong conviction on one of the corners that’s there, I think you can move out of there. I think there’s going to be really good corners in the second round like Jordan Lewis, who’s a kid out of Michigan. You’ve got Desmond King out of Iowa. You’ve got a lot of corners who could go – Quincy Wilson, out of Florida, is probably a second-round pick as well. Ahkello Witherspoon out of Colorado. There are a lot of corners who are going to go in the second round.

“So I’m always an advocate of, if you get an offer to trade down, I think that’s sometimes the best case scenario for everybody.”

And although the Eagles went in the opposite direction a year ago, trading up to eight and two in order to take Carson Wentz, Roseman knows the value of getting those extra picks, especially in a deep draft.

"You get into these situations where it's pretty clear cut when you have a draft board, you're picking at 14, you have a list of guys that you have graded as worth going at 14," he said last week. "If you have a bunch of those guys that are available when you pick, you entertain trade-down offers, far enough that you can still get one of those top guys. If you don't have 14 guys, you see if there's an opportunity to move up.

The reason that may make more sense this year than in past years is because the position where the Eagles most need to improve is cornerback. And the consensus among many draft experts is that this is the deepest CB class they've ever seen.

"Cornerback, there’s a lot of depth there. It wouldn’t shock me if there were three guys available at that position who would be of value to the Eagles when they get on the board at No. 14," said McShay. "If they get an offer to move back a little bit and get additional compensation, I think that would be a good idea, depending on who’s available.

"They’ve got picks 14, 43 and 99. And this is a draft where it’s loaded in rounds two and three. If you can pick up an additional pick, I think that would be a good way to go."

It almost makes too much sense, even if it's not what Eagles fans want to be hearing on the eve of the NFL Draft.

So if you fall asleep early on Thursday night and wake up to this on Friday, you'll at least know why.

RELATED: Mel Kiper Jr. says this draft is loaded with red flags – and that was before the Gareon Conley report