Eagles' Bradford reportedly out at least a week; no update from Kelly 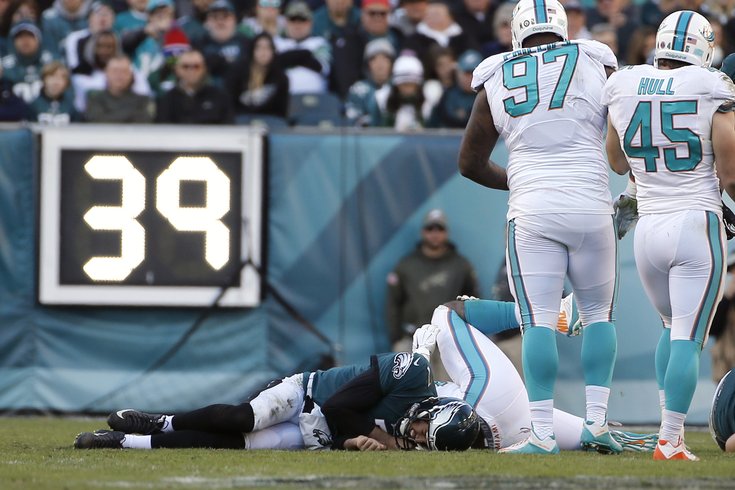 Eagles QB Sam Bradford lays on the field after being injured in the third quarter of Sunday's loss to the Dolphins.

As expected, Philadelphia Eagles head coach Chip Kelly wasn't ready to offer any updates about the health of Sam Bradford after the quarterback was knocked out of Sunday's loss to the Dolphins with a concussion and shoulder injury on this play:

And while it may seem like the third-year coach is trying to hide something from the media, fans and his upcoming opponents, that's not necessarily the case. He's been very consistent all year about the fact that he meets with the training staff after meeting with the media. Whether or not you want to believe that -- or think that he should hold his meetings in a different order -- is up to you.

Of course we'd all like to get injury updates as soon as possible, but at least we know where we stand in terms of when to expect the updates. That doesn't mean the question isn't worth asking -- as it is almost every week, no matter who the injured player is.

"I don't have any information on Sam [Bradford]," Kelly said during his Monday session with the media. "I'll meet with the trainers after this like every week."

He was then asked a follow-up regarding which injury -- the concussion or shoulder -- was more of a concern.

"They didn't say anything about that," Kelly said. "They just said he hurt his shoulder but is in concussion protocol, so that's the thing we'll deal with. Again, we'll meet with [the trainers] after this, after today, so probably around two or two thirty."

Kelly was then asked whether or not the team could provide an update after that meeting. Head of media relations Derek Boyko said the Eagles would try. But I wouldn't hold your breath.

During his weekly appearance on WIP early on Monday, Kelly said that Bradford remains the team's starting QB if healthy.

But according to a report from Ian Rapoport of NFL.com, the Eagles QB suffered a separated shoulder and could miss each of the team's next two games.

It's worth noting that Rapoport was off last week on his initial diagnosis of linebacker Jordan Hicks' injury, originally reporting that the rookie would only miss two to four weeks. The Eagles later announced that Hicks, a potential defensive rookie of the year candidate, would be placed on season-ending IR.

If Bradford indeed misses both those games, it will be backup Mark Sanchez facing the Buccaneers and Lions. And according to Kelly, that won't change much in how the team prepares this week.

Last season, Sanchez saw extended time after then-starter Nick Foles went down with an injury around the same time. The former Jets QB started the final eight games of the season for the 6-2 Eagles, and went 4-4 over that stretch with 12 TDs and 9 INTs but lost three of the final four games as the Birds slipped from playoff contention.

This season, Sanchez will have slightly less pressure on him, as the Eagles are on the outside looking in, and should he be able to win the next two games and help get his team back on track, he'll instantly become a fan favorite.

That's assuming, of course, that Bradford is out for an extended period of time. Hopefully, we'll find out more on his status after Chip's 2:30 appointment with the team medical staff.