Five reasons the Eagles lost to the Dolphins 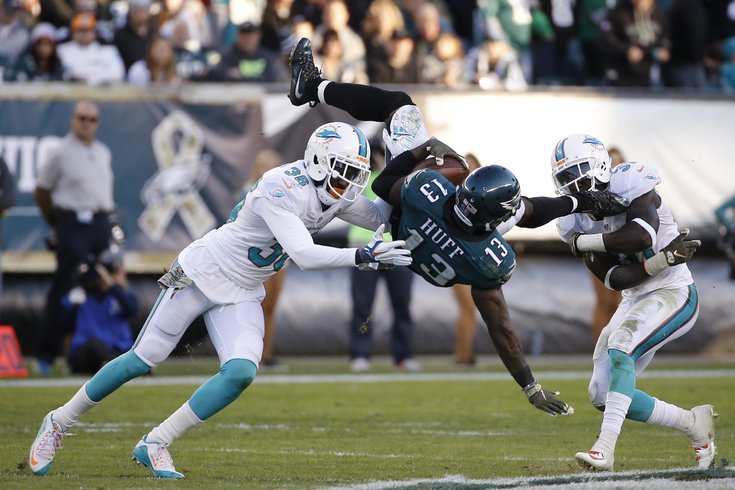 Philadelphia Eagles' Josh Huff (13) is tackled by Miami Dolphins' Tony Lippett (36) and Michael Thomas (31) during the second half.

For the first time all season, the Eagles showed up in time for a game. But they didn't stick around to finish it.

Plagued by slow starts that have resulted in a first-quarter point differential of minus-30, the Birds scored more points in the first quarter against the Dolphins (16) than they had in all eight of their previous games ... combined (10).

And while an awful second quarter saw their 16-3 lead diminish to a 16-13 score was enough to make you forget about how dominant they looked during the first 15 minutes of action Sunday, it was nice to see the Eagles play from ahead instead of scrambling to catch up in the second half. Furthermore, had it not been for the opening-drive touchdown -- the Eagles first of the season -- and Walter Thurmond's huge hit on Tannenhill that led to a safety, Chip Kelly could have once again found his team behind heading into the locker room.

Instead, the Eagles were able to hold onto their lead, but it wouldn't last -- and that's only the start of the what turned into a dismal afternoon for the Eagles.

Here are five reasons they lost to the Dolphins on Sunday:

'It's not good luck'

When you look at the stat sheet from this game, one thing jumps out at you: How the hell did the Eagles lose this game? The Eagles ran 22 more plays then the Dolphins. They out-gained them by 147 yards. They only turned the ball over once. And they had 30 fewer penalty yards.

Sure, it's about the timing of some of their negative plays -- like the INT coming at the worst possible moment in the game. But there were a few plays where you just had to shake your head and say, today isn't the Eagles day -- like losing your starting QB or how the Dolphins scored their go-ahead touchdown. In case you missed it, it looked like this:

So when asked if that play was just a bit of bad luck, Kelly's response was, "Well, it's not good luck."

It's a marathon, not a sprint

As previously mentioned, the Eagles got off to their best start of the season Sunday. After that first quarter, it was all downhill. They scored just three points the rest of the game. They also had a blocked punt, a missed field goal and a turnover in the end zone.

It's easy to blame their late-game offensive struggles on the fact that they lost both Sam Bradford and Ryan Mathews in the third quarter to injuries. But in all honesty, the offense was stagnant for most of the second and third quarters as well, prior to Bradford's injury.

The interception in the end zone may have been the most costly play of the game. With about four minutes left to play, the Eagles had the ball inside the Dolphins 10-yard-line. Trailing 20-19, a field goal would have put them ahead with not much time on the clock. Instead, they decided to call a passing play, and the Mark Sanchez pass was intercepted by Miami safety Reshad Jones.

They also had a punt blocked, which resulted in the Dolphins taking over on the Eagles 12-yard-line. Two plays later, Ryan Tannehill hit Lamar Miller for Miami's first touchdown of the day. It was the Eagles' second blocked punt of the season.

Eagles did not lose this game because the kicker missed a field goal, by the way. They lost because they're just not a very good team.

I agree with my colleague here. The missed FG was not THE reason the Eagles lost, but it certainly didn't help. The blocked punt was much more costly. Furthermore, the Dolphins didn't seem scared of punting at Darren Sproles, and the often-explosive back wasn't able to generate much and spark the team as the offense began to struggle.

Suh blows up the line

The Dolphins may have only recorded one sack in the game, but their front seven seemed to be getting the best of the Eagles offensive line on Sunday, specifically Ndamukong Suh. But it turned out to be Miami's run defense -- the one we expected the Birds to torch all day -- that really stepped up.

The Eagles, after rushing for 521 yards over their last three games (174 yards/game), were held to less than half that Sunday and finished the game with just 88 yards on the ground. That's against a team that was allowing 142 yards per game.

And when the Eagles wanted to pass, Suh and the Dolphins line was forcing the Eagles to change their strategy. Because they were getting such a good rush down the center of the line, Kelly said postgame, the Eagles were forced to run more rollouts and bootlegs. That worked in the first quarter, with Brent Celek and others finding space across the middle, but it didn't last long.

For the first time all season, the Eagles didn't force any.

I'm not hanging this loss on the defense, but a turnover or two certainly would've helped their chances.

More to come on this loss once I digest what the hell just happened...