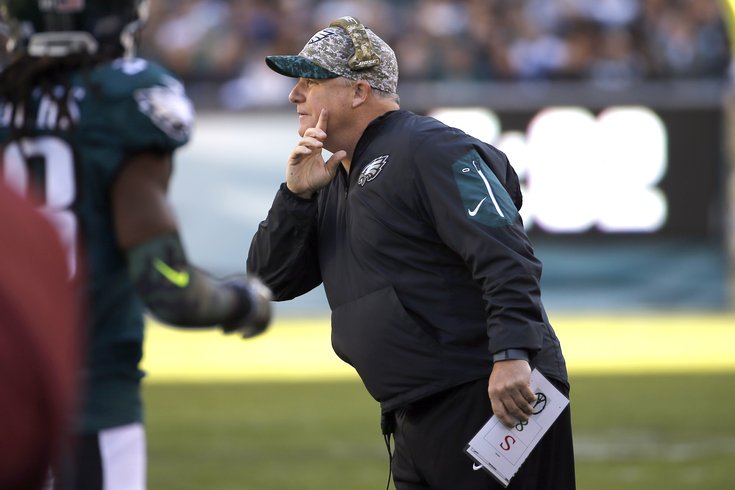 Sunday's loss to the Dolphins is one Chip Kelly would certainly like back.

The score alone is not indicative of just how bad the Philadelphia Eagles’ 20-19 loss to the Miami Dolphins was — there have been more than a few that were worse. Likewise, the stats won’t speak to the amount of pain this defeat will cause to fans.

But take a step back and consider the following: its impact on their playoff chances; the quality of their opponent; the expectations following last week’s win over Dallas; the way the game started; the way in which it slipped through their fingers; and, to top it all off, the other loss the Eagles suffered Sunday — their starting quarterback Sam Bradford.

When you combine all of those things, their Week 10 loss to the Dolphins may go down as the worst of the Chip Kelly era. Let’s take a look at why:

The loss nearly caused the Eagles to fall even further behind the New York Giants for the NFC East lead. But thanks to a late field goal, the Patriots were able to hang on and remain undefeated, keeping the Giants just a half-game ahead in the standings. That's probably the only good news for the Birds on this Sunday -- but considering what happened at Lincoln Financial Field, are the playoffs even something that fans should worry about?

But what if the Eagles beat the Dolphins? They would have taken over first place in the division and if Bradford's injuries don't cause him to miss significant time, this team would still have had the look of a potential playoff team.

Even if it was only a facade.

The Dolphins came into town losers of two straight road games and at 3-5 were in last place in the AFC East. They had the fifth-worst point differential in their division and their coach was in charge of the tight ends six weeks ago.

And they were allowing the second most rushing yards in the NFL.

Oh, and did I mention they were without their leading pass rusher (Cameron Wake) and two of their starting defensive backs.

"We didn't do a good job, I think, in terms of putting ourselves in situations where we can be successful," Kelly said after the game. "We knew we could move the football, and we did. You run that many plays and you have that many yards, but we didn't come away with enough points, and that's on us."

The Eagles coach is right about that one. This loss was all on the Eagles. Aside from the blocked punt, the Dolphins didn't play that well. It's not like Miami looked better than their record suggested; it was just that the Eagles looked like a worse team out there for the majority of the game.

The expectations after beating Dallas

Kelly refused to call last weeks’ win over the Cowboys a “turning point,” quickly pointing to the fact that those kind of things can’t be decided until after the season. Prophetically, he said, “If we don't do something after this victory after Dallas, then this game wasn't a turning point in the season.”

But that didn’t stop many outsiders from looking at it that way. There were signs to point that the Eagles were starting to click offensively. They were averaging 174 yards rushing coming into the game after a historically bad start to the year despite adding the 2014 rushing champ, DeMarco Murray, and former Chargers starting back Ryan Mathews in the offseason. Against the Dolphins, they managed just 83 yards on 36 carries (2.3 yards per attempt).

Bradford had shown flashes in recent weeks that he was starting to settle in and become more comfortable with his new teammates. And he looked sharp again early on Sunday, but that his day was ended early due to injury.

Furthermore, the Eagles were entering a stretch of three games against three sub-.500 teams and had a chance to string together some wins and build off that momentum. Despite being almost a touchdown favorite on Sunday, they did the one thing they couldn’t afford to do — lose.

The way the game started

After consistently struggling in the first quarters of games — the Eagles had been outscored 40-10 heading into Sunday's game — the offense finally got off to a fast start against the Dolphins. Thanks to a big first quarter from TE Brent Celek (80 yards on a pair of catches) and a perfect start from Sam Bradford (158.3 rating in the first quarter), the Eagles answered Miami's opening drive field goal with a quick touchdown score, only their second of the season. The defense would even get in on the action, with Walter Thurmond absolutely crushing Ryan Tannehill in the back of the end zone and causing a safety, thanks in large part to the worst kickoff return in NFL history.

The Dolphins just gave up another safety, thanks in part to this awful kick return pic.twitter.com/9c6cvFQPJp

For the Dolphins, it was their third safety in as many games, and it was beginning to look like the Birds were going to run away with it. Hope was high among Eagles fans. Everything was clicking. And in the first quarter, no less!

And then ... everything went wrong.

How it slipped through their fingers

After jumping out to a 16-3 lead, the Eagles regained possession after a Miami punt with two minutes left in the first quarter. Like they had done all day to that point, the offense marched right down the field -- Celek even caught his third long pass of the day in the process. They had a chance to go up 20 points and essentially put their opponents away early in the game. Only this time, the drive stalled at the Dolphins 14 yard line, and the Eagles were forced to try a 32-yard field goal.

But Caleb Sturgis, the former Miami kicker, missed. And the Eagles never quite looked the same.

On their next possession, the Birds were able to pick up a first down, but a Jason Kelce holding penalty prevented them from picking up another and they called in the punt team.

For the second time this season, Donnie Jones had one of his punts run back, and although the Dolphins didn't return it for a touchdown like the Cowboys did in Week 2, the result was essentially the same. Tannehill hit RB Lamar Miller for a 12-yard touchdown two plays later to cut the Eagles lead to 16-13 at halftime.

The next five Eagles' drives all ended with a punt. Luckily, the Dolphins weren't much better offensively, and the Eagles were able to take their 16-13 lead into the fourth quarter. But that didn't last long.

On the first play of the fourth quarter, Connor Barwin tipped Tannehill's pass straight up in the air, and for a moment, it looked like the Eagles were going to get their first turnover of the game right when they needed it most -- with the Dolphins threatening to tie or take the lead back for the first time since it was 3-0. Instead, the ball went right to Jarvis Landry, despite being surrounded by three Eagles.

“That’s kind of how the game went," Barwin said in the locker room. "It was in the air for four seconds; it has to be a pick. There were a couple of plays there that rolled their way, but that’s how the game goes sometimes.”

It was at that point when you started to get the feeling that this was not going to end well after all.

The loss ... and the other loss

On the possession prior to Landry's go-ahead touchdown, the Eagles suffered their second-worst loss of the day when Bradford took a hard sack and left the game, never to be heard from again.

The extent of his injuries are not yet known — he originally left the game with a left shoulder injury, but was also diagnosed with a concussion — but it’s safe to assume that there's more than a slight chance he misses their Week 11 matchup against the Bucs. They also lost RB Ryan Mathews to a concussion.

Bradford's injury forced backup Mark Sanchez into action, much like Nick Foles' injury did this time a year ago. Sanchez was serviceable Sunday, but far from great. He just missed on a potential go-ahead touchdown pass to Miles Austin, who was unable to drag his back foot and he had another to Zach Ertz that was called back due to an illegal shift penalty.

The Eagles were able to cut into the Dolphins' lead thanks to a 37-yard Sturgis FG. And that was enough to give fans a little more false hope -- maybe the last they'll actually fall for this season. After the defense forced a pair of three-and-outs from Miami, the Sanchez and the offense found themselves threatening again.

With less than five minutes left in the game, and down just one point, the Eagles found themselves in a first and goal situation. And given the fact that their backup quarterback was in, the smart play would be to run the ball and settle for a field goal if need be.

But Chip Kelly is too smart for that.

And on second and goal, he decided to let Sanchez throw -- and Reshad Jones stepped in front of Austin for the interception.

"We were hoping he would just take a peek," Kelly said of after the game. "If you don't have it because they're in coverage -- it looked to me like [TE Brent Celek] was open underneath -- just dump it down, play the next snap and get a positive yardage.

"We were already in field goal range; that would have put us up. But you obviously want to try to score a touchdown because there's obviously time left in the game."

You can also score on the ground ...

Now, the 4-5 Eagles look much more vulnerable next week against Tampa. Considering the division is so bad, they still have a chance at making the postseason. But if Bradford -- and Mathews and Jason Peters -- aren't ready for Jameis Winston and the Bucs, who beat the Cowboys on Sunday, their season could be officially ended next week.

More than likely, however, it's already over for Kelly's team.