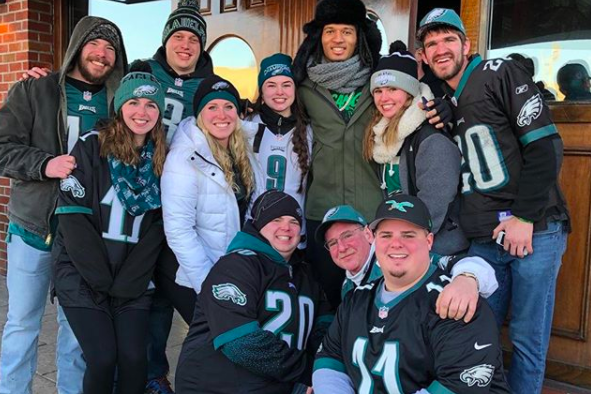 Eagles rookie cornerback Sidney Jones IV poses with the fans who found his phone during the Super Bowl parade on Thursday.

Talk about a rookie mistake.

First-year cornerback Sidney Jones IV dropped his cellphone as the Eagles paraded from Lincoln Financial Field to the Philadelphia Museum of Art on Thursday.

As the team – and the city for that matter – relished in the victory, Jones had no way of capturing the moment or knowing where his phone had landed.

And good luck trying to find it among the legions of Eagles fans that swarmed Philadelphia to celebrate the team's first Super Bowl victory.

Luckily for Jones, some friendly fans picked up his phone and vowed to return it. But not without having a little bit of fun first.

The fans who found Jones' phone snapped a selfie and posted it to his verified Instagram account, writing "Guess who dropped their phone at the parade!!!! We will return it."

Guess who dropped their phone at the parade!!!! We will return it

Jones, who only appeared in one game this season – making two tackles in the Eagles' 6-0 loss to the Dallas Cowboys in Week 17 – later tweeted that he lost his phone.

I really lost my phone tho😅

It's unclear exactly where Jones fumbled the phone or how the fans picked it up, given the metal barricades that lined the route.

Based on the photo the fans posted to Instagram, it appears Jones likely dropped it while the Eagles traveled along the Benjamin Franklin Parkway.

But the fans who found it stayed true to their word. Jones thanked the "awesome" fans who returned his phone in a tweet.

Got my phone back guys. Thanks to the awesome fans that returned it 🤘🏾🙌🏾🙏🏾

Jones then posed for a photo with the group of fans who recovered his phone. Naturally, he posted it to Instagram.

The awesome fans that brought my phone back to me🤘🏾🙏🏾 #RealLove