Plus, what's going on with Jordan Howard, Alshon Jeffery and Nelson Agholor? 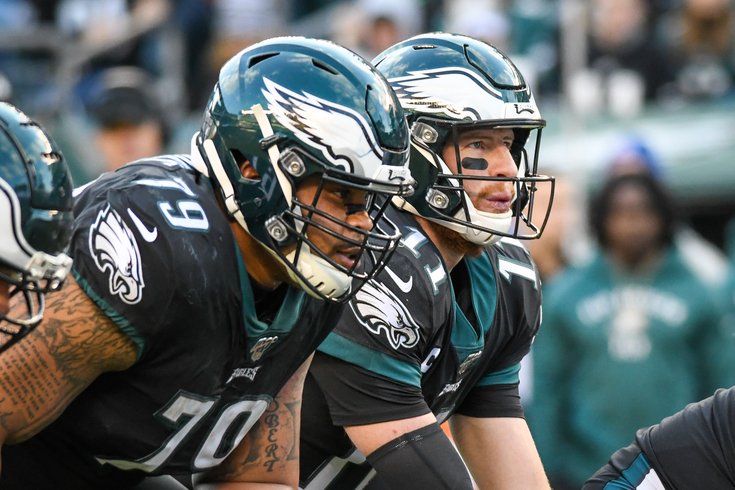 The Eagles didn't suffer a ton of injuries in Sunday's 17-9 loss to the Seahawks, but there were still plenty of players missing from action, players the team would like to see back before traveling to Miami for a Week 13 matchup against the Dolphins.

Let's take a look at those injured Birds and what we know about each player's status heading into this week.

The Eagles quarterback struggled mightily in the Birds' loss to the Seahawks, and that wasn't helped by an injury he suffered in the second half when trying to make a tackle following a fumble that was, at least in part, of his own making.

Wentz left the field and went to the locker room for X-rays, which came back negative, and he was able to return to the game without missing a snap. After the game, Wentz appeared fine during his postgame press conference but was seen leaving the stadium with his hand wrapped and heavily iced, leading some to worry that his injured right hand might keep him sidelined this week.

"He's got a little bruise in his hand, kind of in the middle finger there," Pederson said of Wentz, adding that his starting QB shouldn't miss any practice this week. "He's day-to-day, should be fine for the game."

While that's good news for sure, the injury is on his throwing hand, meaning any lingering discomfort could impact his ability to grip, and thus throw, the football. And while Pederson acknowledged that could be the case, he was also quick to point out that Wentz was able to play — and play some of his best football of the day — after bruising his hand.

"It's going to affect it a little bit," Pederson added. "It's just sore, being able to grip the football, but he battled through it and finished the game."

That bodes well for Wentz' status heading into the Eagles' Week 13 game in Miami.

Johnson, who missed the Seahawks game while recovering from a concussion he suffered a week earlier against the Patriots, is nearing a return, as the starting right tackle told the Inquirer's Jeff McLane on Monday that he believes he'll clear the NFL's concussion protocol on Tuesday and will return to practice on Wednesday.

Lane Johnson just said he would be cleared tomorrow. #Eagles

It appears Johnson and his coach are on the same page as Pederson told reporters that he believes Lane is nearing a return.

"He's still in the protocol," Pederson said. "But I'm optimistic he could see the practice field on Wednesday this week."

That's great news for the Eagles offense, as it's become abundantly clear the impact Johnson has on the offense, not to mention the trickle-down effect his absence has on the rest of the offensive line, causing rookie Andre Dillard to struggle playing a position he hasn't played since high school and leading to him ultimately being benched in favor of Halapoulivaati Vaitai, who slid over after replacing Brandon Brooks (more on him in a minute).

The Eagles desperately need Johnson back, as they've clearly struggled in games without him in the lineup.

Sticking with the right side of the offensive line for a minute, right guard Brandon Brooks, who has been one of the best offensive linemen in the NFL this season and recently signed a massive extension with the Eagles, left Sunday's loss to the Eagles with what the team first described as an "illness." On Monday morning, Brooks confirmed that he actually suffered a setback in his ongoing battle with anxiety, something that's been well documented over the years.

While Pederson said he's seen players show some nerves before games, he's never experienced anything like what Brooks has been dealing with.

"Honestly, this is probably the first time I've ever had any experience with this type of thing," Pederson said. "I know, I've seen guys back in my days in Green Bay that worked themselves up for games and then go hit a trash can [to vomit] and then they're out playing. Obviously, in Brandon's case, this is real life for him and this is serious. It's something he battles with every single day and does a great job managing that. But, for me personally, this is the first time to experience that."

There's no word yet on Brooks' status for next week, but it's been great to see the overwhelmingly positive response from Eagles fans, who seem to be placing a priority on Brooks' mental health over the success of a football team. And that's the way it should be.

One thing that is worth noting is that Johnson's potential return to the lineup could be a positive for Brooks, as the two have developed a special bond during their time together, one that goes so far as to include a pregame puke session to help get their nerves out. In other words, Johnson has been helping Brooks deal with his sometimes crippling anxiety, and knowing that his partner in crime will be lined up next to him could go a long way toward getting the All-Pro guard back on the field.

Perhaps the most mysterious injury continues to be the stinger suffered by Jordan Howard in the Eagles' win over the Bears. Since then, the Eagles have had a bye and played two games, and Howard still has yet to be cleared for contact.

"Obviously, with the stinger, he still hasn't regained full strength in his shoulder, so he's day-to-day," Pederson said. "He'll still do individual [work at practice] this week and we'll see where he is at the end of the week."

Stingers typically don't last this long, as they're essentially nerve damage cause by a forceful blow. Like, imagine getting punched in the shoulder so hard that your entire arm goes numb and tingles. Now, imagine that sensation lasting for an entire month. If we take the Eagles at their word, that's basically what they're saying is wrong with Howard. If he's out again on Sunday, it's time we start asking some pointed questions about Howard's extended absence — or perhaps that time has already arrived.

According to the American Academy of Orthopaedic Surgeons, it's rare for stinger symptoms to keep someone sidelined for a month. "Burner and stinger symptoms typically occur in one arm only. They usually last seconds to minutes, but in some cases they can last hours, days, or even longer," they say on their website.

However, the recommended treatment is mainly rest, and athletes are not permitted to return until all the symptoms, like "a burning or electric shock sensation" or "arm numbness and weakness," subside.

In Howard's absence, Miles Sanders was the Eagles leading rusher on Sunday, carrying the ball 12 times while recently-acquired Jay Ajayi carried the ball six times. But the biggest difference for the Eagles has been how much they've been throwing the ball overall the last two weeks, especially against two defenses who have been susceptible to the run. Last week, their running backs carried the ball 18 times compared to 40 throws for Carson Wentz. And it got worse this past week with the Eagles again giving the ball to their running backs just 18 times while Wentz attempted 45 passes.

Hopefully, Howard will be healthy by Sunday and the Birds can get back to a more balanced attack.

Both Jeffery (ankle) and Agholor (knee) missed the loss to the Seahawks, allowing Jordan Matthews to temporarily take over as the Eagles' No. 1 wideout because apparently we're stuck in some kind of time loop.

As of Friday, both receivers were "trending in the right direction" according to Pederson and there was hope that both could play against Seattle. But by Sunday morning, it became clear that neither would be ready to go, leaving the Birds woefully under-matched at wideout.

The news on Monday, however, wasn't much different than it was on Friday.

"They're still trending in the right direction," Pederson said. "They just weren't ready to go."

That's not great, considering they appeared close to being ready for Sunday. If they're still trending up, they have to be healthy by now, right? The fact that Pederson didn't unequivocally say that either would return to practice this week means we'll have to once again continue to monitor their status on the injury reports.