Eagles' Dorenbos, who 'got to live out a dream,' finishes third on 'America's Got Talent' 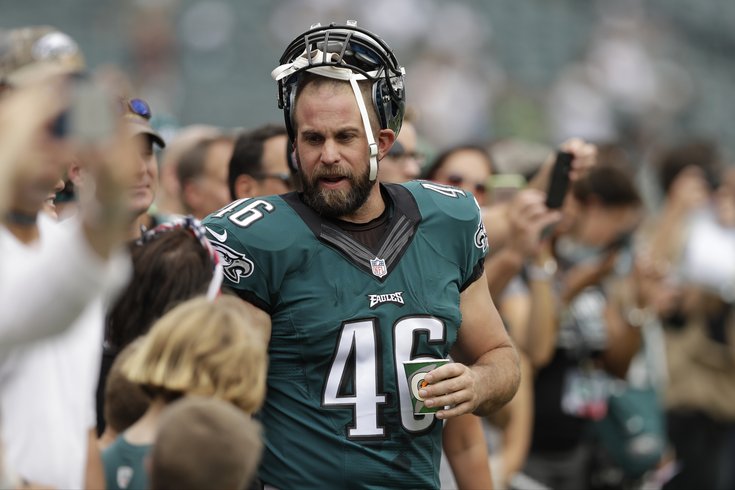 Someone sitting up in bed on a Tuesday night in Normal, Illinois -- a person who may not know the difference between a football and a pumpkin -- now knows who Jon Dorenbos is. Someone channel hopping in Canal Point, Florida, who may have thought a long snapper was a fisherman on an Alaskan crab boat, now knows No. 46 of the Philadelphia Eagles.

That’s what Dorenbos, the beloved veteran special teamer, wanted when he decided to compete on NBC’s “America’s Got Talent.” The goal was simple: To have some fun building his after-football brand.

It appears he certainly has. And it also appears it’s turned into something much larger than he anticipated.

A lot more of America knows the name Jon Dorenbos.

His personal, tragic story gripped the hearts of everyone across the country who watched. His sleight-of-hand magic tricks enabled him to reach the finals among the thousands that auditioned for the show. But his ultimate goal of winning AGT fell just short. He finished third overall, one-percentage behind the eventual winner, 12-year-old ukulele-playing Grace VanderWaal, a favorite to win the coveted $1-million prize who garnered millions of votes with her catchy, folksy tunes.

Dorenbos performed one final trick Wednesday night, appearing with Paula Abdul, displaying yet another hard-to-believe card trick by piecing together the jack-of-spades from a concealed envelope. The crowd again erupted and the celebrity judges all stood and applauded, which is what Dorenbos received throughout his stay on AGT.

“This was an amazing experience, and I knew going into [the finals Wednesday night], it was a win-win for me,” Dorenbos said. “I got to live out a dream and perform my magic in front of millions of people, really something I never could have imagined. You know going into this, you have ideas of winning the whole thing, but then you check yourself and just enjoy the process of moving on, so you don’t get too far ahead of yourself and get disappointed.

“I’ll tell you what, regardless of what happened, I’m not disappointed. I think it’s fair to say I learned something more about myself. I travel all over during the offseason performing, and I play a lot of different places. But when that spotlight is directly on you, it gets a little different. I’m on a football field playing an NFL game on Sunday, when the only time they notice the long-snapper is if he snaps the ball over the punter’s head. This was something I proved I could do, performing in front of millions.”

His aunt, Susan Hindman, who raised Jon and his older Kristina after their mother Kathy was killed on June 2, 1992, by their father Alan, was with him in the audience during every show. It may have been more nerve-wracking for her awaiting the announcements of host Nick Cannon breaking down the finalists than it was for Jon himself.

“This couldn’t be better for Jon,” Hindman said. “Everyone had an idea [VanderWaal] was a favorite to win. Jon has raised his platform and he sets his own bar now. It’s sad, because my emotions were pulling for him to win. The main thing was for Jon to get that exposure to move on to a new career and now he can move on toward his football again, and some normalcy in life. This was out there for him and in the long run, it’s just for the better.

“Jon learned a lot from the production staff there and the people associated with the show. He loved every minute of the experience.”

Dorenbos immediately rolled after the show, off to the Los Angeles airport to get a flight back to Philadelphia to rejoin the Eagles and focus on his day job as an NFL player.

“None of this would have been possible without the Eagles allowing me to do this,” Dorenbos said. “I’ve really been fortunate that coach [Doug] Pederson let me go cross country like this, when a lot of NFL coaches might not have. I'll tell you something else, I love Philadelphia and Eagles fans. The support I’ve gotten from the city and the fans has been fantastic.

"Think about it: How many NFL fans across the country pay any attention to the long snapper on their team? When I look at all of the positives from this [experience] it’s overwhelming. This whole thing has helped me. People across America know my story and know my magic. It’s all I wanted.”