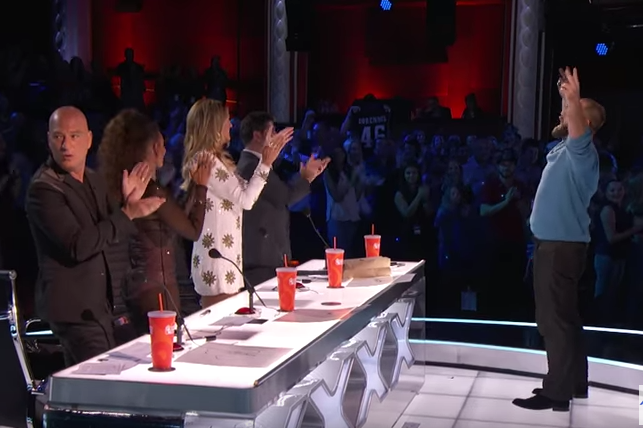 When he handed a glass bottle to Heidi Klum on Tuesday night, Eagles long snapper Jon Dorenbos said, “I got practice in the morning, so I gotta protect these [hands].” Eagles vets will take part in the first full-squad practice on Thursday, and Dorenbos will be there.

But before coming to Philly, Dorenbos wowed the judges again on “America’s Got Talent,” this time with a magic trick that involved some drawing:

Fan voting is a factor in this round, and you can do so here or download the AGT app that the Eagles are directing you to:

No clue how he did that. Doesn't matter. Just vote for the Magic Man @JonDorenbos: https://t.co/zeWAjohrfz pic.twitter.com/9wpQCLhpeG

Wow. Amazing! @nbcagt you rock. #agt thank you for the standing ovation.

On the eve of training camp, Dorenbos’ magic continued to impress his teammates:

I don't know how he does it! Congrats @JonDorenbos, that was awesome. Make sure you all download the @nbcagt app and vote!

After Eagles practice on Wednesday, Doug Pederson was asked about his long snapper's performance. His response was both pretty funny and very supportive.

"He represents us, the organization, this city on that show like a professional," Pederson said. "Obviously his talent is something I think when football is said and done for him, he's definitely got a career in Las Vegas or Atlantic City or wherever. Yeah, I'm pulling for him and excited for where he can go."

As for any future taping schedules potentially interfering with training camp, Pederson said that the Eagles and Dorenbos "will just go day-by-day."