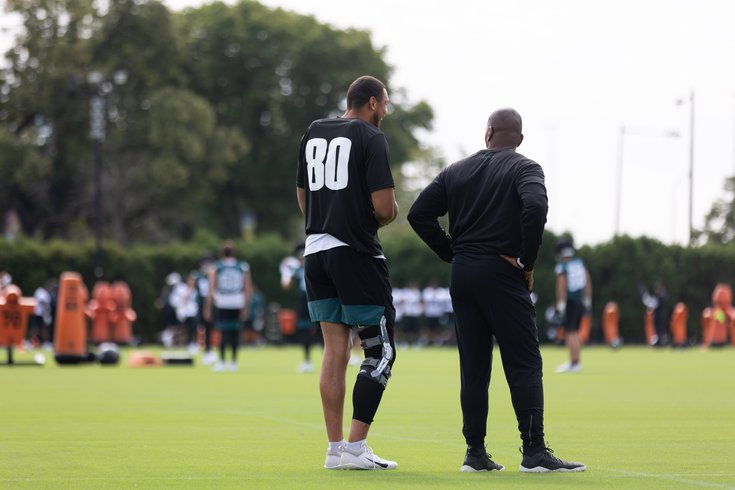 The Philadelphia Eagles made a splash at the trade deadline when they acquired DE Robert Quinn for a fourth-round pick from the Chicago Bears. They also made a few other roster moves over the last couple of days, so let's go through each of those as well.

To make room for Quinn, somebody had to lose their spot on the 53-man roster. That was Jackson, who appeared in every game as a rookie in 2021, playing 253 snaps during the regular season, and 15 snaps in the playoffs. He totaled 18 tackles, one sack, and one forced fumble.

In 2022, Jackson had a good training camp, but disappointed during the team's preseason games. When Derek Barnett was lost for the season with a torn ACL, it was expected that Jackson would fill in and take Barnett's snaps, but playing time never materialized. Jackson appeared in four games, playing just 27 snaps in the regular defense.

Should Jackson clear waivers, the Eagles will likely look to bring Jackson back on the practice squad.

One of the Eagles' training camp and preseason standouts in 2021 was Jackson, a college quarterback who dazzled with his unmissable size and impressive athleticism. Unfortunately, he got hurt during joint practices against the Patriots, and he missed the first eight weeks of the regular season, becoming something of an afterthought.

Against Dallas in the practice squad game Week 18 of 2021, he got his first NFL catch, which also happened to be a touchdown.

Unfortunately, he also tore an ACL in that game, and spent the 2022 offseason rehabbing his knee. He was placed on the PUP list before the start of 2022 training camp.

On Wednesday the Eagles announced that they activated the 21-day window for Jackson's return to the 53-man roster. He'll be able to practice with the team for 21 days, and the team has the option to add him to the active roster at any point. If Jackson is not activated by the end of the 21 days, he will revert to season-ending injured reserve.

The lone player remaining on the PUP list is now Brett Toth, who also tore an ACL during that 2021 Week 18 game against Dallas.

They signed WR Greg Ward to the practice squad

Ward was unable to practice throughout the bulk of training camp this summer with a toe injury, and he was released with an injury settlement at 53-man cutdowns. He is now back on the practice squad.

Ward is a player who could potentially be called up to return punts if the team simply wants a returner who is unlikely to fumble, but he is otherwise not much of a threat to make a big play.