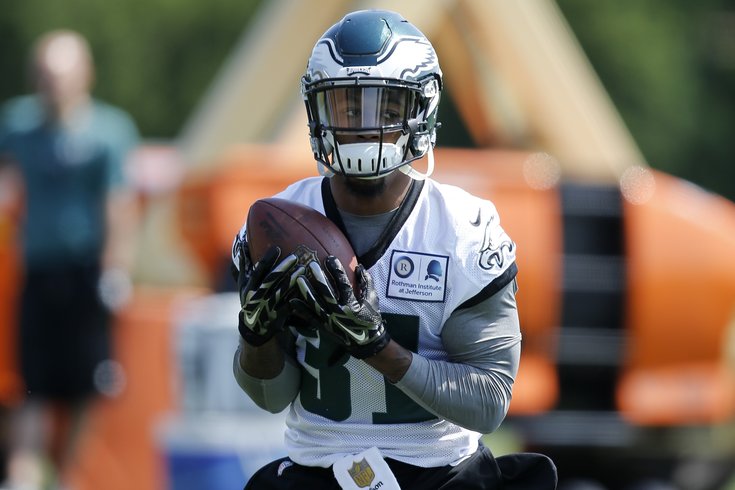 On Day 2 of the Philadelphia Eagles' minicamp, the Birds' defense dominated the offense. Thursday will be the final day of Eagles practices until the team reconvenes at the end of July for training camp. Here's what we saw on Wednesday:

The pass breakup list is looong. Jalen Mills had at least three, Denzel Rice had two, Jordan Hicks had one, Mychal Kendricks had one, Najee Goode had one, Ron Brooks had one, Leodis McKelvin had one, and Jaylen Watkins dropped an easy pick, although that would also technically count as a pass breakup. The Eagles' defenders were very active today – and physical. Impressive showing from that side of the ball.

• To expand on the notion that the defense was physical today, there were several times when defenders brought skill players to the ground, which they're technically not allowed to do. Leodis McKelvin brought down T.J. Graham, Mychal Kendricks brought down Chris Pantale, and Jordan Hicks brought down Brent Celek, all while trying to break up passes.

• Jalen Mills looks like he might be a player. He plays with confidence, trusts what he sees, and goes after the football. He doesn't look at all like a rookie, which kind of makes sense, seeing as he has played for years with so many other talented defensive backs at LSU. Today he got reps with the ones.

• Nolan Carroll practiced in team drills for the first time this offseason. He too got some action with the ones, coming in on nickel situations.

• The defense showed an amoeba look today, in which all the defensive linemen and linebackers stand up. The idea for this look is to confuse the offensive linemen, who don't know who is coming, and who is dropping into coverage. An example of an amoeba look:

• For the second day in a row, Allen Barbre and Connor Barwin got into it a little bit.

• The best receiver this camp, by far, has been Jordan Matthews. It feels like that's a thing we say every year now. Matthews' highlight of the day came on a corner route that Matthews was able to catch over Rodney McLeod. Matthews had something to say to McLeod after the play before emphatically spinning the ball on the turf. Chip Kelly would not approve.

• Darren Sproles looks like he still has something left in the tank. He juked the crap out of CB Aaron Grymes on a run play.

• One of the surprise standouts of the spring so far has been TE Chris Pantale, who had two one-handed catches today, and has gotten a number of reps as a fullback. Doug Pederson singled out Pantale during his press conference today.

"Chris is there and he's a guy that is learning really a duel role," he said. "He's a little bit of fullback, he's a little bit of tight end, but he's been a pleasant surprise this offseason and I really look forward to camp and putting the pads on with all of those guys to really see where they are at physically."

If I were to make a 53-man roster projection today, Pantale would be on it.

• Nelson Agholor continues to struggle with drops. He had two more today. It's early and Agholor has time to turn it around, but I believe there's legitimate cause for concern there.

• Sam Bradford took off running today on a 20-yard scamper down the sideline. A year ago, Bradford didn't run at all for the entirety of training camp, with the exception of one five-yard run at the Linc. His legs are far ahead of where they were at this time a year ago.

• Kenjon Barner had a pair of bad moments. He fell on his own on a run play, and he dropped an easy pass.

Earlier today, we wrote about Wentz's Favre-like gunslinger mentality. It was more of the same today, with Wentz taking the bulk of the shots down the field, and Bradford playing far more conservatively.

Like Bradford (as noted above), Wentz took off running down the sideline on one play. He escaped the pocket to his right and beat Taylor Hart and Alex McAlister to the corner. Wentz's wheels are legit. The Eagles have a history of mobile quarterbacks, with Michael Vick, Donovan McNabb, and Randall Cunningham. Wentz doesn't have Vick or Cunningham speed by any stretch, but I don't think he's that far off from McNabb.

As for his throws, it was another up and down day. On the bad side, he overthrew Trey Burton and the ball went right into the arms of Jaylen Watkins, who dropped the easy pick. On the bright side, he threaded the needle on a few intermediate throws.