Carson Wentz likes to air it out, and Doug Pederson wants to let him 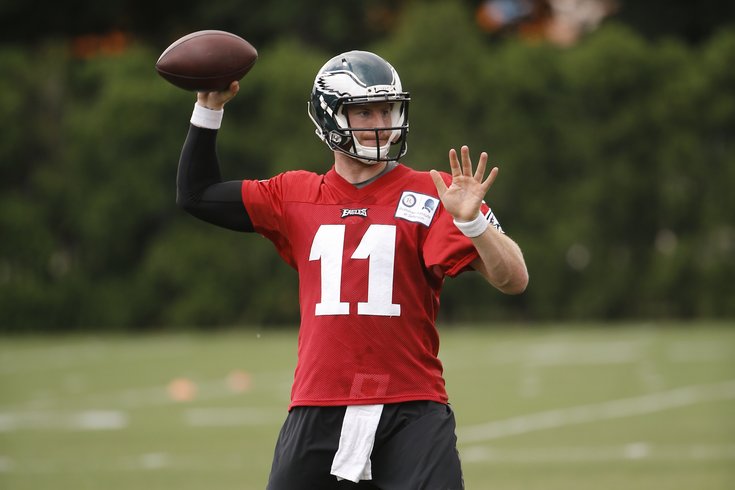 Carson Wentz has a gun, and he likes to use it.

After the Eagles selected Carson Wentz with the No. 2 overall pick in the 2016 NFL Draft, Doug Pederson was asked who Wentz reminded him of. Without hesitation, Pederson mentioned Brett Favre.

"A little bit of Brett Favre, honestly," Pederson said at the time. "He's got that mentality. He's got that aggressiveness that Brett had. Those are some of the skill sets that I see in Carson -- that aggression, that ability to throw the ball down the field. I love quarterbacks that are willing to take a chance, take a calculated risk down the field. Favre was that way. I see a lot of the same characteristics in Carson."

In practices so far this offseason, Wentz has shown a Favre-like gunslinger mentality. In fact, in our practice notes yesterday, we noted that Wentz is more willing to gamble than Sam Bradford and Chase Daniel.

One thing that has been clear in media-attended practices so far is that Wentz takes far more shots down the field than the other two quarterbacks. It's not even close. He has a big arm, and he likes to let it rip. There's good and bad in that. On the one hand, that's going to lead to a higher percentage of incomplete passes and picks. On the other hand, you're going to get more big plays, and pass interference penalties.

On Wednesday, Pederson acknowledged that Wentz likes to let it rip.

"Most of it is the reads," said Pederson. "There are a couple decisions he has made that we've corrected based on some of the throws he's made deep. You probably saw one yesterday, the interception. Not a great decision, but again, that's part of learning the system.

We noted the throw Pederson was talking about yesterday in our practice notes.

On one deep throw, Wentz threw his worst pass of the offseason, or at least the worst one that I've seen. It was a play action waggle to the right side, and Wentz threw deep all the way back across the field to the left side. It was a wounded duck that hung in the air for a while, and was easily picked off by Chris Maragos.

"We didn't actually talk about that one," said Wentz. "I don't think there was much to be said. It was a poor decision, a poor throw, and I shook that one off."

Still, even with the mistakes, Pederson encourages aggressiveness.

"He has a natural ability to throw the ball down the field," Pederson said. "And that's what you like. You love the aggression. You want to be able to push it down the field. Some of it is by play design, some of it is just sheer mistake, but man, I love seeing the ball go over the top at times."

“I think there’s a fine line,” said Wentz. “I think there’s a time to be aggressive and I think that’s something I like to bring. I like to push the ball down the field when it’s there. But there are also times to just take the underneath one, and that also comes with learning the offense. That’s kind of those fine detail things – when you should attack and when you shouldn’t, so I’m learning that every day.

“Even in college I had conversations with coaches at times, to just take the underneath throw instead of forcing things down the field. Part of it is my nature, but I need to walk that fine line.”

Letting it rip is certainly better than watching the quarterback throw short of sticks on third down all game. So let the kid let it rip.